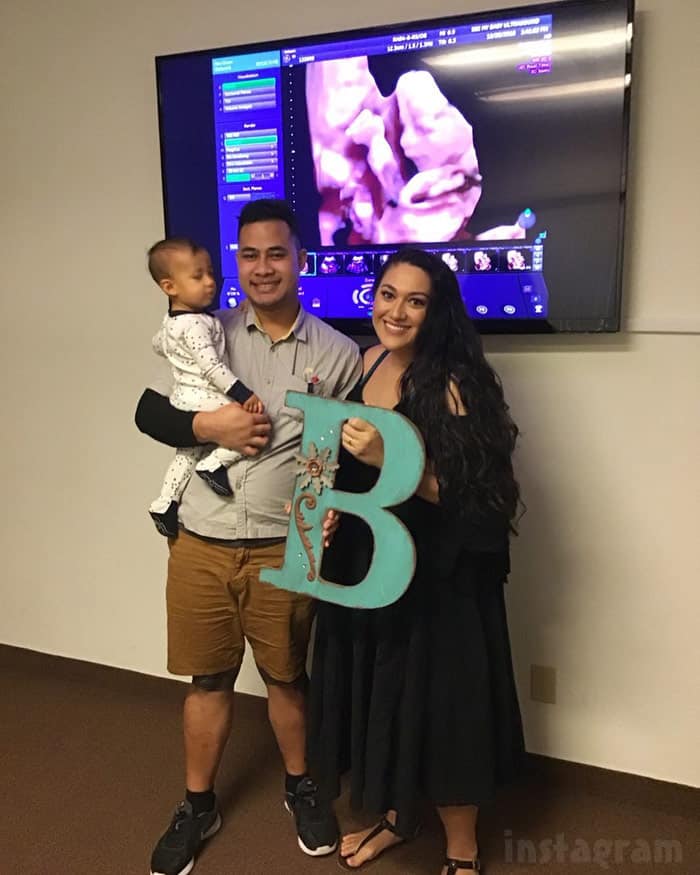 90 Day Fiance couple Asuelu and Kalani have just announced the sex of their second baby! Plus, Kalani responds to negative reactions after she elected to breastfeed her son Oliver without covering up while filming the Tell All.

First up, let’s get right to that baby news! Kalani made the reveal on Instagram by sharing a photo of herself with Asuelu and their son Oliver. In the picture, Kalani is holding a very large blue letter “B” as the family poses in front of a flat screen TV with Kalani’s latest sonogram. Just in case the letter “B” wasn’t enough of a clue, Kalani spilled the beans in the caption. “We’re having another boy!” she wrote, along with a blue heart. “I’m now 24 weeks and due at the end of April.”

Kalani then asked her followers: “Anyone else think they look like twins? ??????”

Prior to making the big gender reveal, Kalani was dealing with some backlash after she elected to breastfeed her son Oliver while the Tell All cameras were rolling. She shared a lengthy post defending her decision, while at the same time calling out those critics for their double standard when it comes to breasts.

“If I didn’t need to cover up when half of my boobs were out for decoration, why would I magically need to cover up 1/4 of a single boob that was being used to nurse?” Kalani asked in a caption to a gallery of photos that featured her Tell All look:

If you think breastfeeding in public is comparable to sh*tting in public, please make sure you try the latter in front of a cop.

If you liken breastfeeding in public to having sex in public because both are natural, realize that

1) eating is necessary to live, while sex is not and

2) breathing is also natural and necessary to live—you should try to cover up while doing that.

The bottom line is that I was away from my son all day and he wanted to eat, so I fed him. I will never apologize for prioritizing my son’s comfort over the comfort of people who are more outraged by a baby being breastfed than kids who don’t even have food to eat. 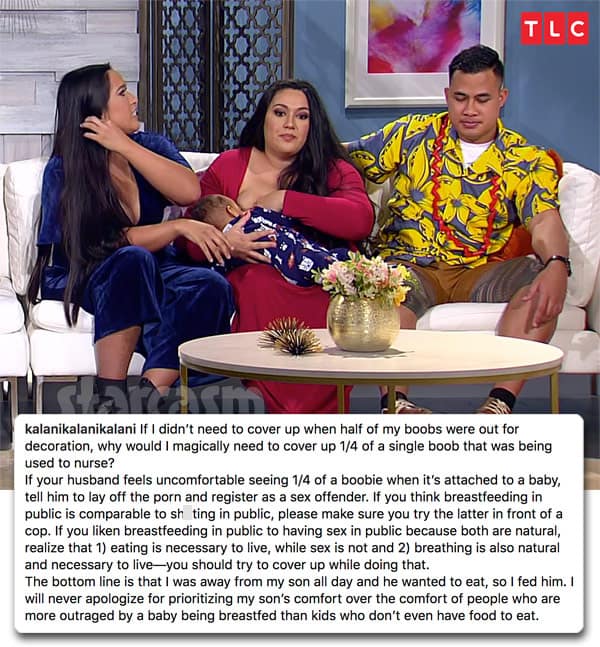 The breastfeeding in public controversy is nothing new for Kalani. While she and Asuelu were in New York City to tape the Tell All, she shared numerous videos and photos of them touring the city — including many in which she was breastfeeding Oliver. We actually shared a screen cap of one of those videos on Instagram because it featured Kalani breastfeeding Oliver in front of the Statue of Liberty with her sister Kolini. It was a poignant image to me about America, and the fact that Kalani was breastfeeding her son only made it more so. I was surprised when the comments section on the post quickly filled up with folks angrily arguing over Kalani’s decision to feed Oliver in public!

I’m definitely on Kalani’s side in this in that America’s obsession with the over-sexualization of breasts and the resulting cultural taboo surrounding their exposure is just silly sometimes. I actually admire those like the Kardashians that manage to capitalize on this silliness by making headlines (and money) every other week by almost exposing (or actually exposing) a nipple. And let’s remember that Kalani didn’t even expose a nipple!

Coming from a background in art, I’m used to the boundaries of what is “shocking” constantly expanding, or at least shifting, so our cultural rigidness when it comes to the nipple (and only a woman’s nipple) is becoming kind of shocking in itself.

These are all just my observations and opinions though. What do you think? Was Kalani going a bit too far by electing to feed Oliver without covering up while filming a nationally televised show? Let us know in the comments — but ONLY if you’re willing to have a civil discussion about it! (Or should I say, “About tit.” Or as Jonathan would say, “Boob! Heh heh!”)