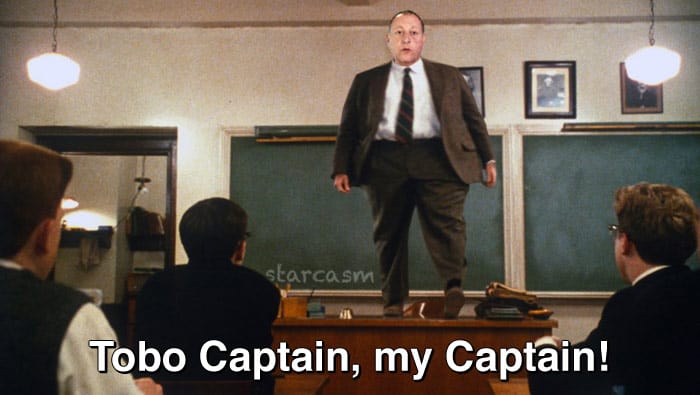 We have some great news for 90 Day Fiance: Happily Ever after fan favorite couple Annie and David Toborowsky as it appears as though David has found himself a real job — as a college professor!

When we first profiled David prior to his first appearance on 90 Day Fiance, we shared this snippet from his Fantasy Thailand curriculum vitae:

David has been to over 63 countries and specializes in international travel and business. He has degrees in Health Administration, Aviation, and is certified to Teach English as a 2nd language.

It’s that last little bit that’s important here as David is listed in a Louisville area college’s course catalog as the professor for five different sections of English as a second language!

Unfortunately, for those hoping to keep Boom Boom and the Bahtman here in the US, adding to his ESL teaching resume sure seems like a smart move if David and Annie are planning a return to China and/or Thailand — which an inside source revealed months ago was the couple’s plan:

“Their end game is to go back to Thailand and open a business someday,” he says. “Annie has applied to a local community college, with hopes of getting an American Degree before they head off.”

He says a major question mark for David and Annie is whether or not TLC invites them back for another season of Happily Ever After. “The dream for them is to get to go to China and be filmed while saving up for the life they want in Thailand.” And if TLC doesn’t ask them to do another season? “If not, David wants to go to China and work temporarily, as he’s done in the past.”

In addition to the gig as a professor, which is more than likely an adjunct position, David is also supplementing his income by handling some of the merchandising for his best pal Chris Thieneman’s Fort Knocker’s Mess Hall restaurant. Of course, that gig could be some sort of work-for-rent deal.

Annie and David have also jumped on board the Cameo bandwagon as they offer personalized messages for fans and/or haters for a small fee. David used his trademark self-deprecating sense of humor to promote a special deal this weekend:

Special Price until Sunday 11/4 we are happy to do shout outs for Bdays, Anniversaries, Quit your job, break up with someone or marital advice lol

In another post, David joked about needing help to buy another water buffalo 🙂 ฿?

Speaking of water buffalo and wedding ceremonies, David and Annie celebrated their one-year wedding anniversary last week, and Annie shared a gallery of wedding photos and a purely Annie message for David:

Sine we met you are always be my best man. You're love and support me whatever I want to be or do. I just want to make you happy because you're the reason that I'm happy ?????????????????? HAPPY ANNIVERSARY @toborowsky_david #90dayfiance #90dayfiancehappilyeverafter #tlc

I’m thrilled to see that David and Annie are still together and proving the haters wrong, and even more excited to see that he is gainfully employed and giving fans the opportunity to share the couple’s good vibes with friends via Cameo. It really does seem as though the couple is set up perfectly to return overseas where David can continue to teach English as a second language, and both can continue to bring in extra revenue via Cameo.

However, putting a damper on all the positivity for me personally is the possibility that the couple may not be back on TLC. David, just know that I am standing on my TLC University desk and shouting to the rafters: “O Captain, my Captain!”

90 Day Fiance Ashley says Jay handled immigration case ‘out of court,’ clerk confirms no record of his May 8 hearing