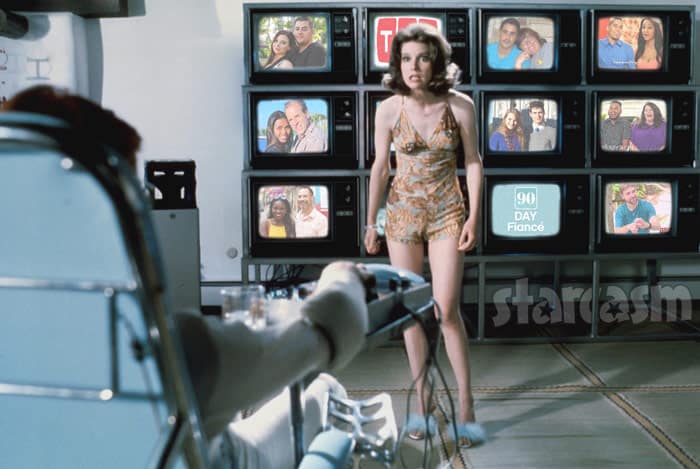 The 90 Day Fiance empire continues to grow! TLC announced at the Discovery Communications Summer TCA Event on Thursday that they will be adding a FOURTH SPIN-OFF to their hugely successful franchise; in the latest edition, they flip the script and document Americans looking to leave the US to pursue their romantic happily ever afters abroad.

90 Day Fiance: Happily Ever After cast members Molly Hopkins, Paola Mayfield, and Russ Mayfield were on stage at the Beverly Hilton Hotel for the announcement, along with Matt Sharp, CEO of the show’s production company, Sharp Entertainment.

Matt shared some of the inspiration for the new concept, which has the working title 90 Day Fiance: The Other Way. “We noticed in the casting process there were Americans who said I’m going to forego my lifestyle, my family, my culture, my country to be with this person. There have been little bits of this in other shows,” he explained.

Matt answered questions from the audience members, which seemed to include some fairly woke fans of the show who asked about the authenticity of the relationships as well as background checks!

In regards to the authenticity of the relationships featured in the franchise, Matt beat back any potential naysayers by sharing some pretty striking numbers. “Our batting average on this show is that out of every 25 couples on 90 Day Fiancé, we’ve only had three divorces,” he pointed out. “That’s less than 10% and the current U.S. (divorce) rate is over 40%. It’s one of the reasons why people love this show; it’s so unexpected.”

Matt added: “We’re not involved in the immigration process. We find couples for the show that are already in the process. It’s an authentic process: these are couples who are in love and going through this process.”

And what about background checks? As readers of Starcasm are well aware, there are A LOT of mug shot photos out there from US cast members, including some for domestic violence related issues.

“We don’t put people together,” Matt explained. “Everyone we feature on the show, they found themselves organically.” Deadline adds that Sharp “finds couples through immigration attorneys.” (We’ve seen and posted numerous casting calls for the various franchise installments, so I assume that at least some of the cast members approached production directly. Yes, I’m looking at you Patrick and Cortney!)

I’m pretty excited for the new series! As I’ve stated MANY times before, reality show concepts are a bit overrated and a show’s success usually boils down to casting and editing — and no one casts and edits better than Sharp! Although the franchise has seen its fair share of thirsty peeps trying to act like they think reality stars ought to act (i.e., like 95% of all other reality shows), the majority of the couples featured on 90 Day Fiance do seem authentic, and THAT’S the biggest reason for the success of the show. You simply WILL NOT find Danielle Jbali, Paul Staehle, or Nicole Nafziger on pretty much any other reality series.

I can’t wait to see some fellow Americans willing to give up the good ol’ US of A for love in another country. And those stories will only get better as we follow a select few living abroad on the inevitable 90 Day Fiance: The Other Way: Happily Ever After series!