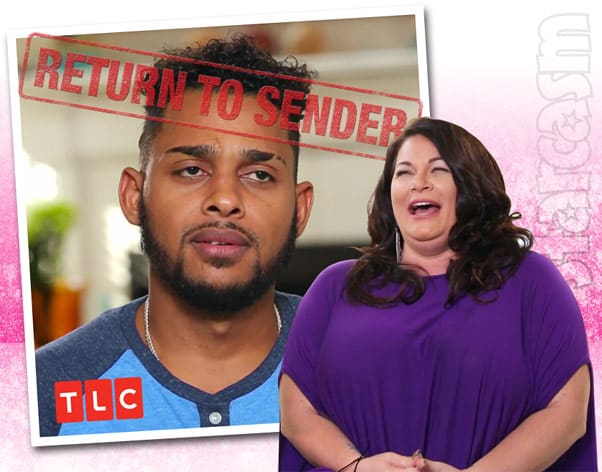 Soap Dirt was the first to report that Season 5 star Luis Mendez will likely be deported to the Dominican Republic soon, and Luis has since confirmed the report by telling In Touch that he is being deported “next month.”

Luis didn’t reveal any details about the specific reasons for his deportation, but it’s not too hard to piece it together. He has since remarried a woman who is reportedly from the Dominican Republic, but is currently living in the United States. It is assumed that Molly withdrew her support for Luis’ green card when they divorced, and his new wife would be unable to sponsor him due to her not being a US citizen. That leaves him with no legal standing to remain in the country.

We shared a post in May of 2018 that thoroughly explained Luis’ situation.

Here is a timeline of events leading up to Luis’ reported deportation next month:

July, 2017 – As we were the first to report, Molly and Luis secretly got married without telling show producers on July 20.

January 2, 2018 – Luis reveals on social media that Molly was divorcing him.

February, 2018 – Luis is photographed in New Jersey, where some of his family members lived.

March 2, 2018 – Luis shares an excerpt from the divorce filing demanding that he return his cell phone that Molly paid for. He also says that he will soon be posting evidence of domestic violence. Being a victim of domestic violence is one of the few reasons that someone in the United States on a K-1 visa who gets a quick divorce can remain.

May 20, 2018 – 90 Day Fiance: Happily Ever After Season 3 premieres and includes Molly and Luis attempting to repair their relationship. The repair attempt does not go well. (I believe they filmed in late 2017.)

May 4, 2018 – As we were the first to report, a judge makes the split official by signing off on Luis and Molly’s divorce.

June 11, 2018 – A video surfaces online featuring an explosive fight between Molly and Luis. (Police report details from the incident were later revealed.) It’s speculated that this is the evidence of domestic violence that Luis teased in March.

#90DayFiance Luis got remarried in New Jersey in September, less than 5 months after his divorce from Molly. See the photos & video, plus get Luis and Molly's reactions! #bridehopping https://t.co/z5GRcGWvPk

September 19, 2018 – Luis gets married in New Jersey! “Yeah, I totally got used,” Molly said during an Instagram live stream after photos from Luis’ wedding surfaced online. “But it’s all good,” she continued. “Luis got married to a Dominican lady in Jersey, the best I could tell.” Molly would later say during an appearance on The Tonight Show With Jimmy Fallon that she thought it was likely that Luis used her to get to the United states and that he planned on eventually marrying the other woman all along.

As mentioned at the beginning of this post, Luis will be the first 90 Day Fiance cast member to be deported. However, he may be joined by another cast member soon!

According to numerous immigration experts, Colt Johnson’s ex Larissa dos Santos Lima will more than likely be deported eventually. Despite being arrested for domestic violence on three separate occasions, she has managed to avoid being deported so far by having those charges dropped or reduced. But, Colt has reportedly removed his support for Larissa’s green card, and she is currently in the same boat as Luis in that regard. She could marry another US citizen, but even that would not be a guarantee that she would not be deported to Brazil.

Will #90DayFiance #HappilyEverAfter star Luis be deported after his divorce from Molly? His case is A LOT different than Mohamed's, and it seems almost definite that he will be: https://t.co/fVpKIXn1e1

Meanwhile, the only 90 Day Fiance cast member to actually spend time in I.C.E. custody is still in the United States. Jay Smith is back with his wife Ashley Martson, despite some incredibly dramatic and disturbing public fights and accusations — including rape. I don’t know if he is still at risk of deportation for all of his antics since coming to the United States. (Unfortunately, being annoying and an all-around terrible person is not a viable reason for deportation.)