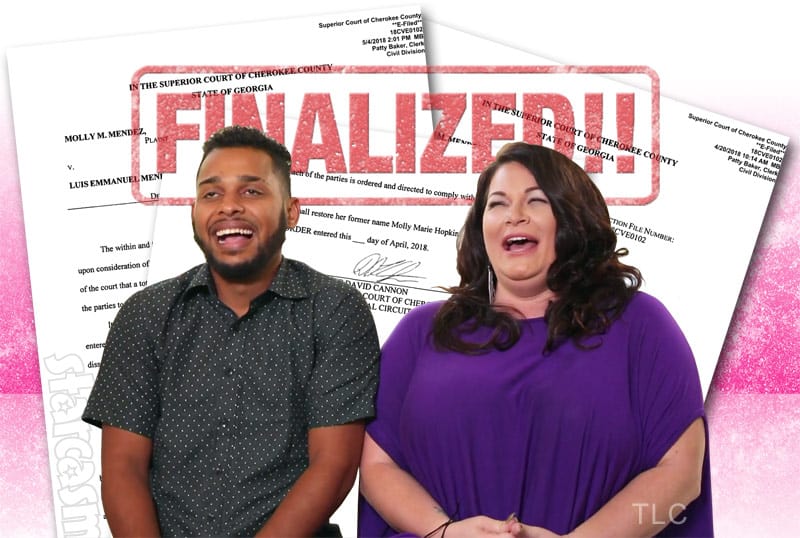 It’s official, 90 Day Fiance stars Molly Hopkins and Luis Mendez are divorced! It appears as though the reconciliation efforts between Molly and Luis featured on the upcoming season of Happily Ever After were for naught as their divorce was finalized and signed off on by a Georgia judge on May 4.

As we previously reported, Molly officially filed the paperwork for the divorce on January 23. She states in the filing that she and Luis officially separated earlier that month, which does seem to allow plenty of time for an attempted on-camera reconciliation after their tumultuous split on 90 Day Fiance. In the divorce filing, it specifies January 5 as a cut off when addressing mutual debts, so I assume that is the official date of their separation. Although Luis did post online about Molly filing for divorce a few days prior to January 5. Either way, I’m betting we will be seeing some fireworks from the couple’s last New Year’s Eve together!

To fill in the gaps on the divorce timeline, Molly signed off on the final divorce agreement on March 16 with Luis following suit on March 30. The filing actually had a blank April date set for finalization, but the judge didn’t get to it until last week.

In the settlement, it appears as though Molly did extremely well protecting her assets! She maintains full ownership of her house, her car, and her business. In addition, she does not appear to owe Luis any sort of support — although she and/or Luis’s K-1 visa sponsor are still financially on the hook until July of 2027 should Luis receive any sort of government aide such as unemployment. Molly even got Luis’s cell phone back from him, which he infamously complained about back in early March.

And yes, Molly officially changed her name back to Molly Hopkins.

UPDATE – It seems my understanding of the financial responsibility of Luis’ sponsors was a bit erroneous given the fact that he almost assuredly has not received his green card yet. Click here for an in depth analysis of his situation by someone much more informed about the K1 immigration process than me — an analysis that indicates Luis doesn’t have much of a chance at all of staying in the US!

Here is a more detailed breakdown of the divorce settlement, because, after all, the “debil” is in the details, right? 😉

ALIMONY – Both parties waived “any and all rights [they] may have to maintenance from the [other], past, present, and future.” Both Molly and Luis are “forever” barred from “asserting a claim for maintenance” against the other.

INSURANCE – Neither party is responsible for the other’s life insurance or health insurance.

MARITAL REAL ESTATE – Molly is “awarded sole and exclusive use, possession and ownership of her premarital real property located at [redacted] and said property is designated as Wife’s separate property and not subject to equitable division. Wife shall be responsible for all expenses associated with said property.”

RETIREMENT – “Each party shall be entitled to sole ownership of any and all retirement plan of any kind in their individual respective names and the other party waives any and all claim or interest in the same.”

INVESTMENT ACCOUNTS – “Other than what has been set forth in this Agreement [which was nothing as far as I could tell], the parties warrant that they have no other investment or stock accounts subject to equitable division.”

BANK ACCOUNTS – Molly and Luis have sole rights to accounts in their individual names, and there were no remaining joint accounts at the time of the agreement. “If any joint account are later discovered, the parties shall execute any and all documents and take any actions necessary to close such newly discovered joint accounts.”

MARITAL DEBTS – Molly and Luis accept responsibilty for their own debts, unless otherwise noted in the Agreement. [I could find no reference to any specific debts noted in the divorce filing.] “In the event that a party uses the other party’s credit or incurs debts in the other party’s name after January 5, 2018, he or she shall be entirely responsible for that debt and shall immediately pay off the debtor or reimburse the other party fully for the debt within 24 hours of the discovery of the debt.” 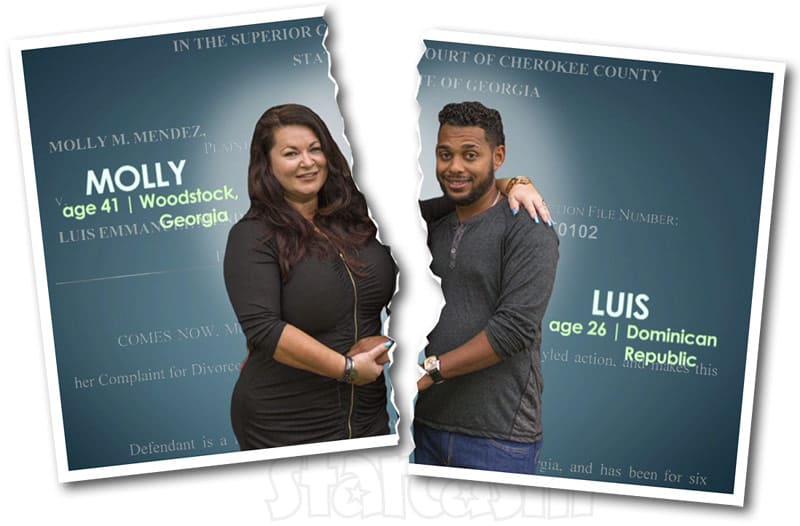 AUTOMOBILE – “Wife shall retain, as her premarital property, sole use, possession and ownership of the 2011 Infiniti Qx56 and said automobile shall be designated her separate property and not subject to equitable division.”

FURNITURE, FURNISHINGS, AND OTHER PERSONAL PROPERTY – Both Molly and Luis retain possession of any furniture or personal property in their possession with the added caveat that everything located at Molly’s address is her “premarital property and not subject to equitable division.” (Sorry Luis, no owls, candles or Mary in a birdcage for you!)

LUIS’ CELL PHONE – Luis is required to return the “cellular phone and all charging cables” to Molly within 14 days of the execution of the divorce filing.

TAXES – Molly and Luis will file their 2017 taxes as “married filing separately” and they are each responsible for any refund or debt incurred under their individual names.

ATTORNEYS’ FEES – Each party is reponsible for his or her own attorney’s fees.

The rest of the filing is a lot of legalese, etc. but here are a few spotlighted excerpts — including one that contains a 90 Day Fiance fan favorite word:

Freedom from Interference – The parties mutually agree to live separate and apart at any residence of their choosing (subject to any limitations set forth in their parenting plan, where applicable). Each party shall be free from the interference, harassment, authority and control, direct or indirect, by the other as if single and unmarried, except for any communication required by this Agreement. Each party may engage in any legal employment, business, or profession which he or she may deem advisable, subject to other provisions in this Agreement or the Parenting Plan. Both parties agree that they shall not molest, harass, or interfere with the other whatsoever, nor shall either of them attempt to cohabit or dwell with the other.

Voluntary Execution – The parties acknowledge and represent that this Agreement is fair and reasonable under the circumstances and that it is not the result of any fraud, duress or undue influence exercised by either party or any third party upon either of them, and that each executes it voluntarily and of their own free will.

Mutual Release – Except as may be contained herein to the contrary, each party hereby releases and discharges, and by this Agreement does for himself or herself, and his or her legal heirs, representatives, executors, administrators, and assigns, release and discharge the other of and from all causes of action, claims, rights or demands whatsoever, in law or in equity, in which either party ever had or now has against the other, except for any and all causes of action for dissolution of marriage and/or post-judgment enforcement applications to a court of competent jurisdiction.

90 Day Fiance: Happily Ever After returns for a brand new season on Sunday, May 20 at 8/7c on TLC!