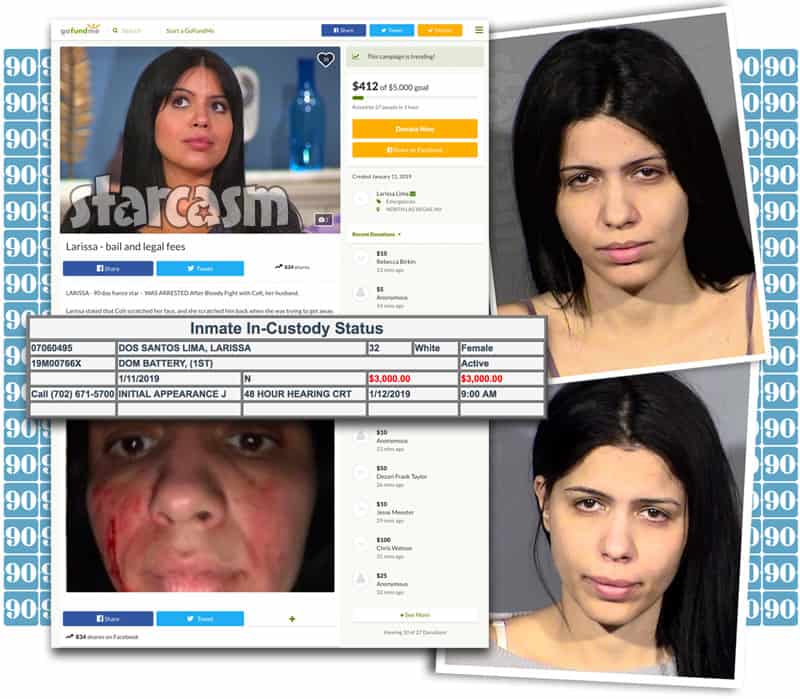 90 Day Fiance star Larissa Dos Santos Lima has been arrested and charged with domestic battery for the third time after a heated argument with her husband Colt Johnson Thursday night that left both of their faces bloody.

According to online jail and court records, this arrest looks identical to Larissa’s first domestic battery arrest in June and her second in November. She has been charged with misdemeanor domestic battery with a bail set at $3,000. Her next scheduled court appearance looks to be Saturday morning. 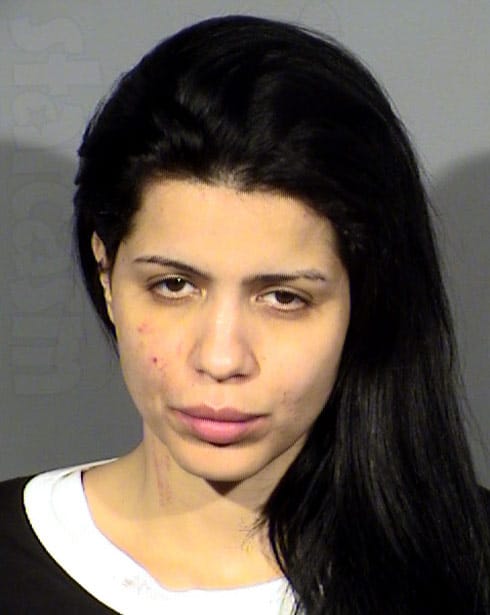 Unlike Larissa’s previous times behind bars, it doesn’t appear as though Colt or his mother Debbie are going to bail her out this time — literally. Larissa gave a friend her Instagram password and permission to post a link to a GoFundMe account set up to help Larissa raise the money she needs to post bail and more. The actual cost of a bond, if you don’t run and forfeit the full amount, is roughly 10% of the bond amount. So Larissa would need right around $300 to get the bond she needs to get out of jail. The GoFundMe has a goal of $5,000, with the extra money going to help cover lawyer fees and/or additional court fees.

Here is the description for the campaign, which has raised $412 of its $5,000 goal at the time of this post:

LARISSA – 90 day fiance star – WAS ARRESTED After Bloody Fight with Colt, her husband.

Larissa stated that Colt scratched her face, and she scratched him back when she was trying to get away.
She says that he also hidden her phone, so she could not call the cops and he called first.

She denies the allegations of self harm, she says Colt ate his own nails after the episodes to avoid jail time.

Cops checked Larissa’s criminal history and saw she had two previous arrests for domestic battery ( both cases dismissed) however they arrested her again.

She will need an attorney.

The description mentions that Larissa “denies the allegations of self harm,” which is referencing police on the scene who determined that her injuries did not appear to be caused by Colt because he bites his nail. (Scroll down to the bottom for more info in an update.)

Colt not being willing to pay for the bond to get Larissa out is not good for her, but what could be much, much worse is if he decides to press charges this time. It’s unclear if that is the case.

In case you missed it, the entire conflict played out on Instagram late Thursday night and into the AM hours Friday morning as Larissa posted a series of photos and videos before and after. You can click here for a full recap with most all of the videos and photos as well as an explanation for what started the whole thing.

Here is a brief preview in the form of videos uploaded by Larissa in which her face appears to be cut and bleeding as she pleads for help after Colt called the police:

UPDATE – Larissa’s GoFundMe continues to bring in more money, and is up over $700 just prior to this post being published. That is almost double the amount from when I started writing it!

UPDATE – TMZ has talked with police and got more details on exactly what went down. Things do not sound good for Larissa:

9:17 AM PT — Law enforcement sources tell us Larissa called cops around 11 PM last night — officers responded — but Colt wasn’t around. Cops returned to the scene a couple hours later and spoke with both Colt and Larissa … they determined Larissa mostly had blood spatter — and a single deep cut — on her face.

We’re told Larissa did have scratches on her stomach, but they appeared to be self-inflicted. Cops checked Larissa’s criminal history and saw she had two previous arrests for domestic battery.

What’s more … cops checked Colt’s fingernails, and observed he’s a nail-biter … and determined the injury to Larissa’s face couldn’t possibly have been from him.

Based on the evidence and her history … police arrested Larissa for domestic battery.

Here are photos of Larissa’s injuries just after the incident:

This is how Larissa looked when she got to her friends house a few hours ago before she was arrested. #90DayFiance

Meanwhile, an Instagram account that appears to be Colt just posted an angry message directed at John Yates for publishing Larissa’s accusations that Colt is a pedophile. Here is the photo of Colt’s alleged conversation with Larissa’s friend Carmen about the accusation followed by his comments:

My wife was mad at me so she told @johnyates327 lies to drum up support for her. I am tired of lies either from my wife or further continued by people that prey on others.

I will make sure you are both prosecuted to the fullest extent of the law.

Domestic violence is not a publicity method to gain followers. Larissa needs help and I can’t give it to her. I only enable her to continue her behavior and each time it becomes worse and worse. I have to stand up and say no more.