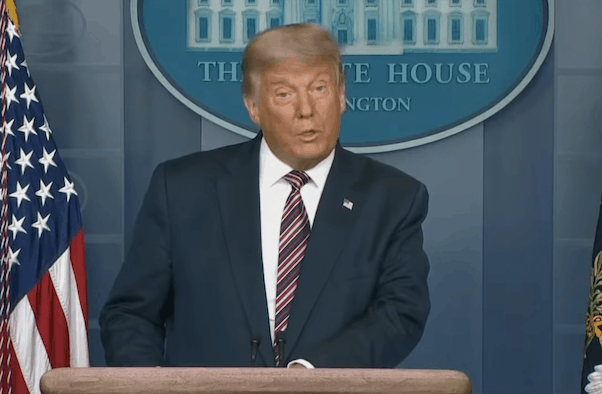 We’re a little over two months away from the start of Joe Biden’s presidency. But the person who currently holds that office hasn’t shown any sign he’s ready to take the L and move on. So, will Donald Trump leave the White House peacefully? Or will the Secret Service actually have to remove him by force after Biden gets sworn in?

If you think that that’s a laughable or outright impossible scenario…well, you’re not wrong. But then everything about Donald Trump and his presidency is laughable and has at one time or another seemed impossible.

It’s the question of the hour. And by “hour,” we mean “the ten weeks between now and Joe Biden’s inauguration.” Constitutionally, it doesn’t matter if Donald Trump leaves the White House peacefully, violently, or not at all.

Nevertheless, there’s been plenty of speculation for at least ten weeks and counting that Trump might not leave if he loses the election. And since that’s now come to pass, the question has a renewed sense of urgency.

Based on everything we know about Donald Trump, the answer has to be a resounding yes. Trump’s bluster and big talk obscure an otherwise obvious fact about the man: he shies away from a fight.

Sure, Trump is full of bravado. He talks a big legal game. And his acolytes love depicting him as a literal strongman.

But to quote the immortal Daniel Plainview, when it comes to the showdown, Trump won’t be there. His wall never really got built, and Mexico didn’t pay for it. Hillary Clinton never got prosecuted for her fictional crimes. Sanctuary cities still exist. COVID hasn’t magically disappeared.

And, most importantly, the 2020 election wasn’t rigged. Nor were its results disputed by the people whose opinions on such things matter: poll watchers, certifiers, judges, and the like.

Trump lost. And Trump runs away from fights. The relevant issue really isn’t whether or not he’ll surrender the presidency. It’s where exactly Trump will be when Joe Biden and Kamala Harris get sworn in.

Because it definitely won’t be the White House. The smart money’s on Trump abandoning that particular ship well before the Inaugural, landing in Mar-A-Lago as president and being nowhere public when Biden takes over the role.

There’ll be no theatrics, no Secret Service heave-ho — and no cameras on anyone but the new administration.

Will Trump accept the election results?

In a word: no. Trump is as petty as he is self-absorbed. He’ll spend the rest of his life claiming he was cheated.

The Republican Party has already come up with a phrase — “legal votes” — to give this election an asterisk. The implication is that whole cargo jets full of illegal votes flew to key cities in under cover of darkness, each ballot filled in for Biden.

This is a flimsy argument at best. Particularly when you remember that the Democratic Party *didn’t* get the outright Senate majority it wanted (Georgia double runoff notwithstanding). And they actually lost seats in the House.

If you’re going to steal an election, there’s really no reason to do it just a little bit.

Nonetheless, all America’s current president has to do to “accept” the election results is not try some embarrassing Oval Office stand-off rather than just leave. And stand-offs have never been his style.

The situation is really almost ideal for a man of Trump’s character. He now gets to spend all his remaining years complaining loudly about how he was wronged. And the only people who’ll listen to him will agree with his every word.

Trump’s brand of politics will live on. And that’s an ongoing problem. But he’s not.