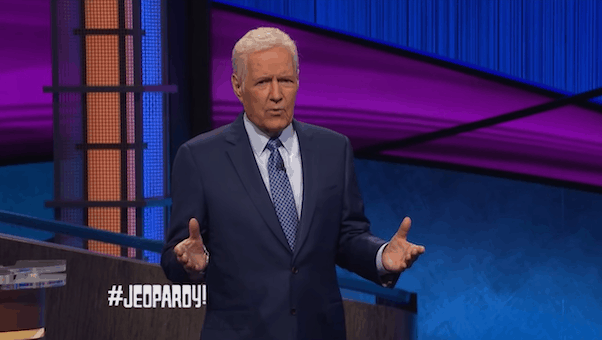 Shortly after Jeopardy! host Alex Trebek passed away, the show’s owners revealed two surprising pieces of information. One is the date of Alex Trebek’s last Jeopardy episode — and the other is the date Trebek filmed the episode itself.

The news may offer a bit of comfort for Jeopardy! fans, as well as pop culture fans in general. Over the course of his 36 years at the helm, Trebek became far more than the host of a game show. His on-air persona and appearances in other media transformed the Canadian-born Trebek into a widely known and much-beloved figure.

Just hours after Trebek’s death, Sony Pictures Entertainment announced when fans should expect his final Jeopardy! episode. According to their reps, Trebek will take his last bow with an episode currently scheduled to air on Christmas Day 2020.

Even more surprising was the aforementioned second bit of news. Sony confirmed that Trebek filmed his now-final episode on October 29th.

Which means that despite battling stage IV pancreatic cancer for nearly two years, and suffering the debilitating treatments that such a battle entails, Alex Trebek was still filming Jeopardy! episodes ten days before his death.

Will we get to see Alex Trebek’s goodbye?

Not long before he passed, Trebek famously shared how he hoped to end his run on Jeopardy!. According to the man himself, Alex Trebek’s goodbye episode would be no different from any other — except for the very end.

“I made this decision a long time ago,” Trebek told television critics earlier this year. “What I would do, it would be the same as when I shaved my mustache. I would do it on a whim. “On that particular day, I will speak to Harry [Friedman, Jeopardy!‘s executive producer], and I will speak to Clay [Jacobsen], our director, and tell them, ‘Give me 30 seconds at the end of the program. That’s all I need to say goodbye, because it’s going to be the last show.’”

Sony has not yet confirmed or disconfirmed the presence of such a goodbye in the Christmas farewell. So we’ll have to wait a few more weeks to see whether Alex got to say goodbye as he’d wanted to.

Given the fact that he was still strong enough to film new episodes almost to the literal day he died, though, it wouldn’t be surprising to see a 30-second message.

Who will replace Alex Trebek on Jeopardy!?

Sony Pictures Entertainment also has yet to address the question of Jeopardy!‘s next host. This, of course, has helped speculation run rampant.

Current gossip actually centers on the most famous contestant in Jeopardy! history. It seems that Ken Jennings is potentially either being considered for the job or is putting himself out there as a candidate.

(Since Trebek’s death, however, Ken Jennings’ only public statement has been his own message of farewell to and gratitude for Trebek.)

Jennings is scheduled to make regular appearances on The Chase, an ABC quiz show based on a British show of the same name, starting later this year. If the American version of The Chase hasn’t yet begun filming, it’s possible that Jennings could simply cut his involvement and jump on board the Jeopardy! ship.