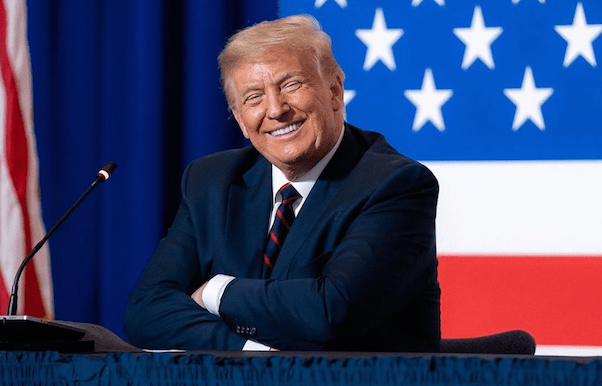 If, during a pandemic, you don’t wear a mask, your job requires you to be around people, and the people around you almost never wear masks, then it’s really only a matter of time until you get sick. But it was still a surprise to get official confirmation early this morning: Trump has COVID, and so does the First Lady.

Trump actually announced the news himself, tweeting it out Friday morning at 12:54. “Tonight, @FLOTUS and I tested positive for COVID-19,” he wrote, adding, “We will begin our quarantine and recovery process immediately. We will get through this TOGETHER!”

It’s unclear if that final “We” refers to Trump and Melania — who seem no closer as a couple now than they did when the divorce rumors started — or if Trump is saying that he and his supporters “will get through this together.”

That’s an important distinction when the subject is someone who’s been as publicly dismissive of COVID-19 as Trump. He called it a hoax in February and March even after having received briefings on how serious the disease is; he flaunted his maskless ways even as numerous high-ranking advisers tested positive. And this past summer, Herman Cain, a prominent Trump supporter and fellow pandemic-denier, died of Covid after contracting it at Trump’s infamous Tulsa rally.

As far as how the disease actually got into the Oval Office? Apparently, Trump has COVID thanks to his advisor Hope Hicks; news of her positive COVID-19 test results broke on Thursday afternoon, hours before the Trumps’ positive confirmation. Hicks had been traveling with Trump all week, including to the first presidential debate in Cleveland this past Tuesday.

As of this writing, the Biden campaign has yet to announce any new COVID test results for the Democratic nominee. (Biden was definitely more than six feet away from Trump onstage at the debate, though neither man wore masks.) A few minutes ago, Biden tweeted out support for the president: “Jill and I send our thoughts to President Trump and First Lady Melania Trump for a swift recovery,” Biden wrote. “We will continue to pray for the health and safety of the president and his family.”

Additionally, just after Trump’s tweet, the White House released a statement from Sean P. Conley, the President’s personal physician. Conley’s statement went into a bit more detail about what’s to come now that Trump has Covid:

The President and First Lady are both well at this time, and they plan to remain at home within the White House during their convalescence.

The White House medical team and I will maintain a vigilant watch, and I appreciate the support provided by some of our country’s greatest medical professionals and institutions. Rest assured I expect the President to continue carrying out his duties without disruption while recovering, and I will keep you updated on any future developments.

Given that most of Trump’s “duties” appear to consist of watching television and using Twitter, Conley is probably correct. And it appears that rallies are out of the question for the length of the first couple’s recovery. The next big question is whether Trump’s health will permit him to participate in the second Presidential debate, a town hall forum currently scheduled for Thursday, October 15.