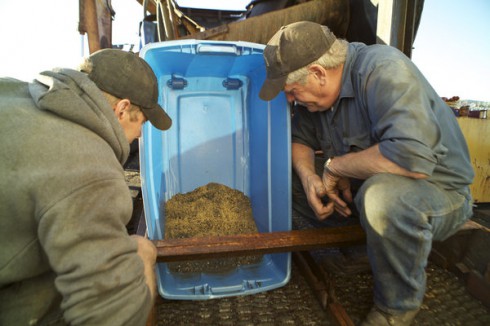 It is probably no surprise that the Alaska Department of Natural Resources has been getting more inquiries than usual about offshore mining leases. First, the price of gold is sky high. Second, the Discovery Channel show, Bering Sea Gold, has gotten quite popular. And, third, most folks have good reason to think that they could do better in the waters off Nome than some of the miners on the show. (Yes, Scott, I’m talking about you.)

In episode 8 of Bering Sea Gold, the Season One finale, a lot of the drama surrounds an auction of offshore mining leases. The miners have been limited to a 640 acre stretch of underwater land for a decade; but the increased value of gold and the increased interest in mining that has followed from it led the DNR to open up more land. Lots more land. And most of it has never been mined before. They divided all the near shore acreage adjacent to Nome into plots ranging from 30 to 160 acres and they auctioned them off to miners.

Here’s a Discovery Channel video that explains the process and what the auction means for some of our new favorite miners.

When is the next auction, you ask? When can you try to outbid Ian Foster or Zeke Tenhoffs for your little patch of gold-laden underwater heaven? Well, unfortunately, it is going to be a while . . . maybe another 10 years. CLICK HERE for the official DNR announcement. The gist is, though, that the auction is done and we’re out of luck. But, don’t despair. There are still a few options.

First, someone is going to have run dredges on all those new claims in Nome. Get out your wetsuit and go find someone to dive for. You’ve got to be easier to work with than Steve Reidel, right? Apparently, that’s all it takes. Second, there are still recreational mining areas open to everyone. And, although, it is tough to tell from the way the show is edited, it may be that some of the Bering Sea Gold miners have been working in that recreation area. So, there’s gold there. Finally, just because a lease has been sold, doesn’t mean that it can’t change hands or be revoked. CLICK HERE to read our article about the process and to follow the links to the DNR regulations for prospecting and mining in Nome.