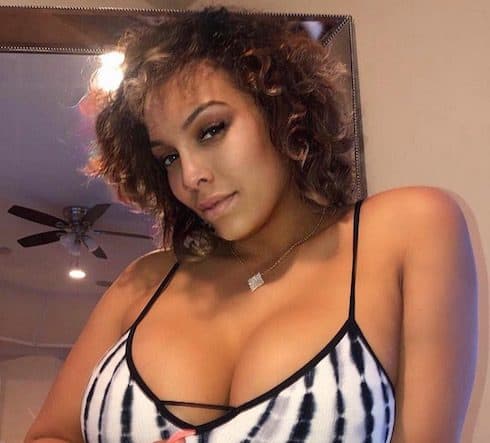 LHHNY star Kimbella just revealed her surprise pregnancy by her longtime partner and new husband Juelz Santana! She dropped the news on social media just as she and Juelz were confirming the quiet rumors on the LHHNY Season 9 reunion special. But when is Kimbella due? And is she having a boy or a girl?

First up, here’s the reveal itself. After breaking the news on LHHNY itself, Kimbella’s official pregnancy announcement came on Instagram. She made it official via a Fashion Nova ad:

Super comfy in my @fashionnova fit at 6 months pregnant! I couldn’t wait to share with you guys!! Use my Code XOKIMBELLA to get 15% Off your purchase! ?

So, back to the original question: When is Kimbella due? If she’s entering her third trimester right now, Kimbella should welcome her new baby into the world in mid-June of 2019 — just as Love & Hip Hop New York Season 10 is expected to begin filming.

The baby will be Kimbella and Juelz’s third child together. Their son, Juelz Santana James, was born in 2010; two years later, they welcomed daughter Bella Monroe James. At this season’s LHHNY reunion, Kimbella also announced that her third child will be a boy.

Kimbella’s pregnancy announcement continues what’s been a whirlwind six months for herself and Juelz. Following their return to the LHHNY cast, the couple found out that Juelz would have to serve 27 months in federal prison on firearms charges after bringing a pistol to Newark International Airport in March of 2018. (Juelz is currently scheduled to be released on May 28, 2021.)

But it hasn’t all been bad news. Kimbella and Juelz also finally tied the knot in a gorgeous ceremony this past January.