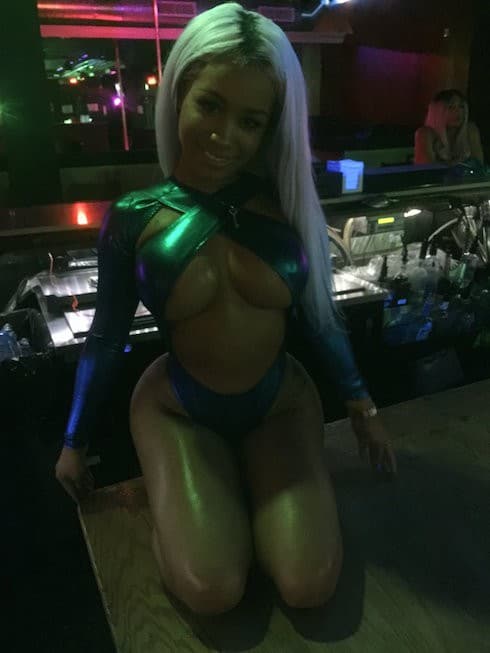 Love & Hip Hop New York newbie Dreamdoll has already found increased public interest in her story thanks to allegations she was arrested for prostitution in Miami back in 2014. Dreamdoll has yet to address that talk; however, there’s also a rumor going around about her stripper past. As far as that goes, Dreamdoll says that the story isn’t true–and that what she actually was doing was far more lucrative.

As we’ve already reported, Dreamdoll is an avid and outspoken fan of plastic surgery, so it seems like part of the stripping story got started because of the common (and often unfounded) association between having work done on one’s body and getting up on the pole. (Click here for our report on Dreamdoll’s plastic surgery, which includes a before-and-after photo gallery.)

And the other major part of the stripping rumors seems to be linked to the fact that Dreamdoll used to tend bar at noted New York City strip club Starlets. (The photo of Dreamdoll at the top of the article was taken during one of her bartending shifts in 2015.) During Dreamdoll’s tenure at the club, the practice of giving bartenders a chance to dance for their patrons became widespread–so much so that it actually caused more than a bit of controversy among the disgruntled stripping community, since (to paraphrase the DJ in the interview below), it’s not like strippers were also given a chance to tend bar while the bartenders were on stage.

Dreamdoll shared her thoughts on the issue during in a heated exchange with EmEz of Power 105.1, in the middle of an interview intended to promote her short-lived appearance on Bad Girls Club last year. Here’s that interview–skip ahead to 12:18 for the “Was Dreamdoll a stripper?” remarks:

Based on the way EmEz frames his comments to Dreamdoll, it sounds like she at least gave stripping a try during one of Starlets’ bartender showcases, even though she was a bartender by trade (and continues to refer to her job at the club as “bartending”). “There’s no difference between y’all,” the host said (quite passionately, it should be noted). “You look down on the strippers, and the strippers are like, ‘Y’all do the same thing–you just servin’ drinks! You doin’ extra!”

“I don’t like the strippers that hate on the bartenders,” Dreamdoll clarified. “At the end of the day, honestly, we all [strippers and bartenders] have to work together…but there’s the ones that like to stomp they foot down on your money, and slide your money across….Just respect my money, and I’ll respect yours.”

On that note, it’s also worth pointing out that Dreamdoll actually met her mentor and GWININ ENTERTAINMENT boss DJ Self at Starlets, as well. Networking happens everywhere! And, in Dreamdoll’s case, it leads to well-repped debut singles: