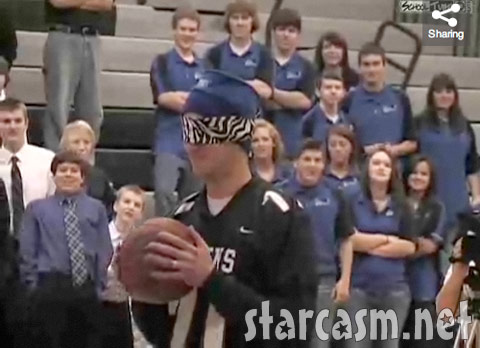 Students at Olathe Northwest High School in Olathe, Kansas decided they would try to imitate the infamous Prank Wars Half Court Shot Prank video in which College Humor’s Streeter blindfolded Amir and let him take a half court shot at a basketball game for a chance at $500,000. The joke was on Amir as the crowd had been told to react as though the shot went in regardless, so when Amir missed badly to the left, the crowd erupted and of course the poor boy thought he had won.

Contrary to popular belief, they do have internet in Kansas and some students were inspired by the infamous half court prank and they decided to pull the same joke on science teacher and girls basketball coach, Joel Branstrom. Watch the hilarious video as Joel Branstrom turns the table and proves once again, you have to wake up pretty early to get the best of a science teacher!

SPOILER ALERT! Watch the video before continuing to read if you don’t want to know the surprise ending!

“I really thought it was going to be pie in the face, especially when they put me in a jersey and covered my hair up, I thought I was going to get hit in the face,” Coach Branstrom told FOX 4 News. “I probably didn’t really know I made it for about a minute.”

The site reveals that Branstrom was no stranger to a basketball court – he was a walk-on at The University of Kansas, a perennial basketball powerhouse, back in 1997. Asked if he would try to repeat his miraculous shot in the future, Barnstrom wisely replied:

“I don’t think I”m ever going to shoot it again, I probably won’t even attempt anymore,” said Branstrom. “You’re (only) as good as your last shot.”

Just in case you’re one of the 347 people that didn’t see the original College Humor Half Court Shot Prank, here it is: