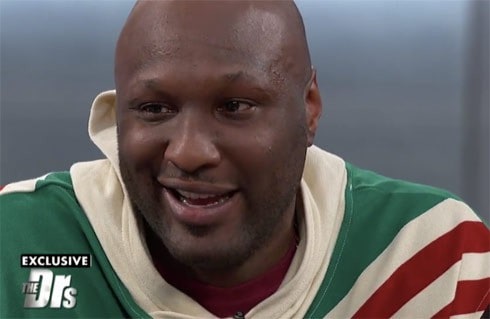 Lamar Odom says he wants his wife back.

The highly publicized divorce between Odom and Keeping Up with the Kardashians star Khloe Kardashian, which was finalized in December, didn’t keep the former NBA player from expressing his desire to rekindle a relationship.

In a brief preview clip for his upcoming appearance on The Doctors, Odom is asked by Dr. Travis Stork,  “Going forward, when you look at your life ahead of you, what are you looking forward to?”

After hesitating briefly Odom answers, “Honestly, I want my wife back.”

Odom’s appearance on the show comes after he completed a month-long stay in rehab.

Khloe Kardashian isn’t on the market at the moment as she’s currently in a dedicated relationship with Cleveland Cavalier star Tristan Thompson. During her Wednesday night appearance on the Late Late Show, Khloe told host James Corden that she and Thompson “use the L word.”

Odom already has another reality TV gig lined up as he’s signed on to do a series that will be about his recovery following a nearly fatal drug overdose in a Las Vegas brothel in October 2015.

Are Tristan Thompson’s reps trying to get ahead of another cheating scandal?

Khloe Kardashian, trying to make amends, lets Lamar Odom move in with her