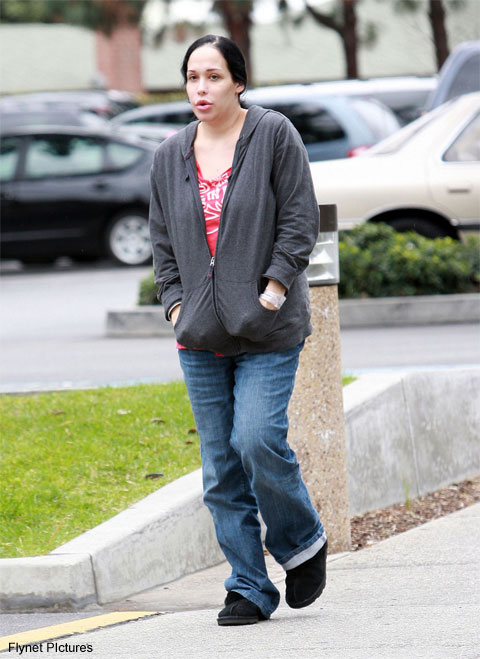 Happy birthday Octobabies! Noah, Maliyah, Isaiah, Nariyah, Makai, Josiah, Jeremiah, and Jonah are not a year into their crazy ride on planet earth. None of us sign up for this, but these kids’ have a more wacky journey ahead than most. At least they’re in this together!

To commemorate this special day, Radaronline has a special present for the world: footage of Nadya “Octomom” Suleman giving birth (via C-section) to her eight babies. It’s hard to imagine now, but this footage was shot back before we knew what Octomom’s face looked like. Days later the details started pouring out, like the fact that she was a single, unemployed student living off of student loans and food stamps. She was embroiled in a bitter fight with her mom and had SIX other children living with her in a cramped, dirty house. Then we found out about all the fertility treatments, and realized her face (which looked like it had been worked on) resembled Angelina Jolie. Oh, the memories!

Octomom has since become a paparazzi magnet, and has tried to capitalize on her fame to earn a little cash to feed her 14 children and get herself ,, Starbucks! Radaronline has diligently covered Octomom in a series of interviews and footage that really helped us understand Octomom and her world.

CLICK HERE to revisit some of Radar’s covarage of Octomom

Now Nadya Suleman has a shockingly taut bikini body, and she’s working on a documentary deal to produce a show that covers the octuplets as they grow. In an attempt to distance herself from the self-imploding Jon & Kate saga, she’s been very vocal about the fact that the film-making will not be a large part of the children’s lives. Despite that Nadya,has stated that she has the hots for Jon Gosselin, and at one point they almost did a dating show together. Showbiz, gotta love it.

Last year when Octomom hit it big starcasm.net was just drawing funny pictures on notebook paper, so we penned (and ‘shopped) a couple of tributes to Nadya Suleman including an “exclusive” ultrasound, Nadya’s own Wikipedia page, and the crowd-pleasing Womb Raider movie.

Now, let’s all celebrate the birth of Nadya’s child army with a tall glass of formula spiked with birth control and wrapped in a condom! Cheers!