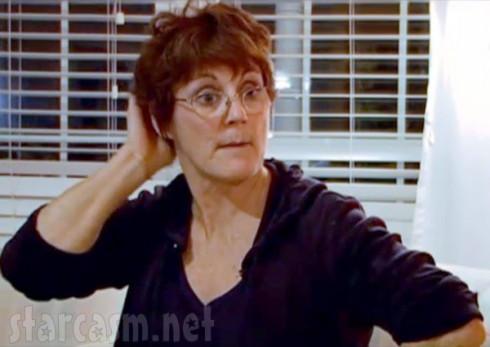 There are few reality stars on television that can compete with Teen Mom 2 star Jenelle Evans when it comes to providing a seemingly never-ending stream of explosive drama. But, there are a few, and one of them happens to be her mother.

Barbara Evans gets in the drama Thunderdome week after week and goes toe to toe with her daughter armed only with her Boston accent, an arsenal of witty retorts, and decibels – lots of decibels. These epic mother and daughter battles are some of the most memorable in reality show history and have even spawned Barbaraism internet memes such as “I seen ya with Kieffah!!!” and “High! High! You both high!”

Barbara’s charisma and boisterous charm have been captured perfectly by the parody Twitter account @BabsEvansMTV, which channels Barbara each and every day with commentary on everything going on in the world of Teen Mom, Teen Mom 2, and 16 & Pregnant. But Babs Evans doesn’t stop there! She can also be caught sipping wine and offering up her take on everything from the Kardashians to politics, all with her trademark Boston accent and plenty enough capital letters to convey the appropriate amount of decibels.

We couldn’t be more pleased to be the first news agency on the planet to get an interview with the online phenomenon that is @BabsEvansMTV! She was kind enough to take time out of her busy schedule of pretending to raise Jenelle and Jace to talk with us about everything from her preferred wine brands to Hooters waitresses. And following in the footsteps of such other similarly notable celebrities as Brad Pitt, Glenn Close, Francis Ford Coppola, Jennifer Aniston, and Martin Scorsese, Barbara tackles James Lipton’s infamous list of ten questions from Inside the Actors Studio!

So bust out that box of wine, pour a glass, pop some corn, and enjoy a heapin’ helpin’ of Bahbrah!

Jenelle recently announced she and Kieffer are back together once again, that he has a car and a job, and he has changed. What do you think about that, and what do you have to say to Kieffer this time around?

Well,my first thought was “FRIGGIN CHRIST”. Aftah I had a glass a wine n calmed down, I told Jenelle “I SEEN YAH WIFF KEIFFAH” Then I told Keiffah if he hurts Jenelle this time, I’m gonna cut his bawls awf. Plain n simple.

If Kieffer has indeed changed, he’s not the only one. Jenelle recently had breast augmentation surgery performed. What was your reaction to that?

You’ve obviously had your hands full raising three kids, one of which is way more than a handful. What advice would you offer to other parents trying to raise a difficult child? 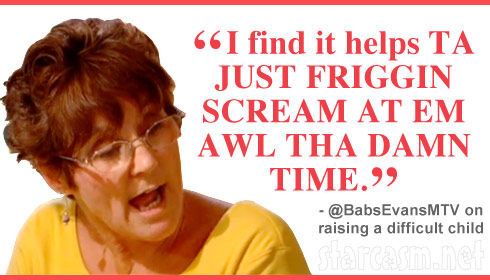 What are your thoughts on MTV announcing there will be a Teen Mom 3 with four new girls chosen from the most recent season of 16 and Pregnant?

Jenelle isn’t the only Evans who has had relationship problems recently. Your boyfriend Mike reportedly left you for a Hooters waitress. What kind of wisdom would you like to share with the ladies out there about men?

Considering you are currently single, here’s a hypothetical question for you. If all three were available, which Teen Mom granddad would Babs Evans ask first – Butch Baltierra, Dr. Randy Houska, or Michael Abraham?

Well, YAH TELL ME. “Butch” or “DOCTAH Randy Houska?” Plus, Barbara Houska has a nice ring ta it. 😉 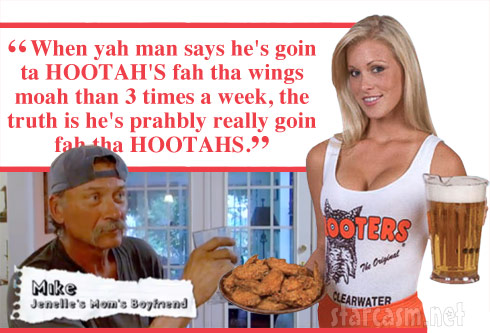 I notice you didn’t mention Michael Abraham, who I assume was your second choice. Is there any parenting advice you would like to give him and Debra in regards to Farrah Abraham?

That’s a hahd one. I don’t like tha attitude on that gurl. My advice is wine, lotsa wine.

You don’t just tweet about Jenelle and her Teen Mom pals. What other shows and celebrities are you a fan of?

And finally, to wrap things up, I thought I might take a page from Frank Lipton’s book and use his list of 10 adapted Marcel Proust questions used on each and every episode of Inside the Actors Studio.

What is your favorite word? FRIG

What is your least favorite word? REEFFAH

What turns you on? A box a FRAHNZIA (wine)

What turns you off? An empty box a wine!

What sound or noise do you love? Jace’s voice

What sound or noise do you hate? Keiffah’s voice

What is your favorite curse word? GAHD DAMNIT

What profession other than your own would you like to attempt? Police Officah

If heaven exists, what would you like to hear God say when you arrive at the pearly gates? “In Heaven, we AWL gaht BAHSTON accents” 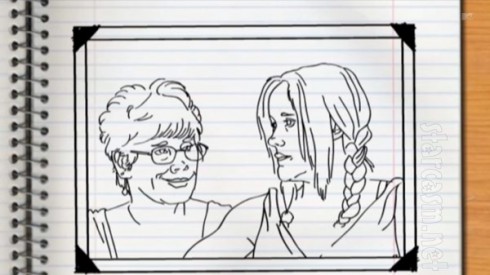 Thanks so much to @BabsEvansMTV for taking time away from tweetin’ and watching Keeping Up With the Kardashians to answer our questions! You can keep up with her views on everything in the cosmos in real time by following her on Twitter or tuning into her Sulia account!