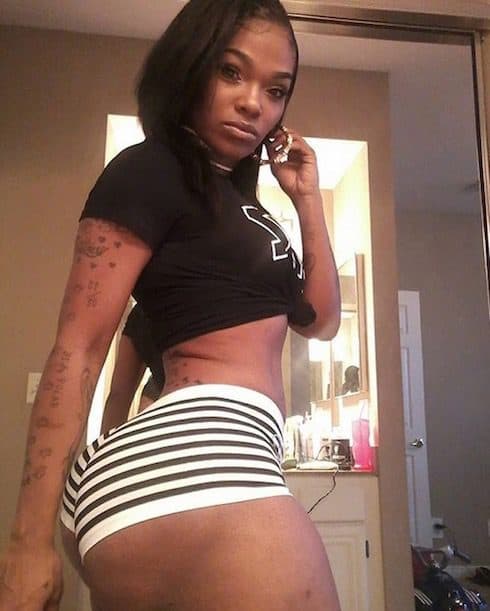 There’s been a lot of chatter about the alleged Apple Watts adult films ever since the former stripper made her Love & Hip Hop Hollywood debut. Gossip like this always surfaces whenever a new Love & Hip Hop cast member has a breakout season. This season alone we’ve already covered Apple’s legendary stripping ability and how she got her “Bottle Girl” nickname; the insidious rumors that Apple Watts used to be a man, which we debunked entirely; and the reveal of Apple’s SugarDaddy.com profile, in which she says she’s looking for a wealthy, well-endowed man between the ages of 25 and 80 to take her around the world.

All of which is to say that there’s never any shortage of gossip. So, after doing a bit of digging, we can exclusively confirm that Apple has indeed worked in the adult industry, featuring (and often starring) in a handful of films between 2006 and 2009. And when we reached out to Apple for comment, she let us know in the straightforward style that’s made her a fan favorite she couldn’t care less who knows about it.

Apple Watts’ real name is Jontelle Watts, but her p0rnstar name is simply “Apple” — and she’s one of dozens of adult actresses whose name contains some form of the word. Add to that ambiguity the fact that Apple has far more tattoos now than she did when she appeared in the films — some of them obscuring the tattoos she did have at the time — and you have a recipe for uncertainty that’s likely kept her brief career under wraps until now.

However, if you happen to watch any of the alleged Apple Watts adult films looking for clues, you’ll notice that each of the actress’ male co-stars call her only “Apple.” And a search for “Apple” on the Internet Adult Film Database, an invaluable resource for anyone the slightest bit interested in tracking down obscure adult film stars, reveals the following profile of an actress whose profile pic matches that of Apple Watts: 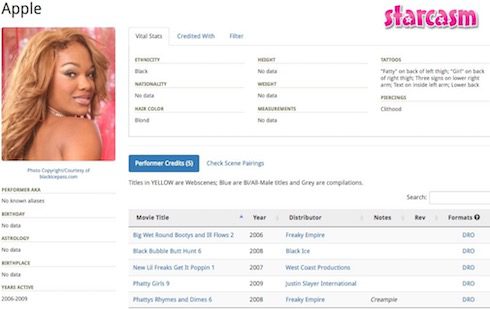 Apple was born in 1985, so she was between around 21 and 24 when her booty-worshipping scenes were filmed.

Additionally, Apple’s IAFD page credits her profile pic to adult website BlackIcePass, where Apple still has an active profile. That page seems to have the rights to one of the five films: 2008’s Black Bubble Butt Hunt 6, in which Apple appears opposite Rico Strong. (A Google search for adult films involving Apple Watts yields one video encoded as “Ms. Apple”; it is actually Apple’s scene from this film.)

While we can’t link to this clip directly — or, thanks to jump cuts and general low quality, show you any screengrabs — we can point out that, should you choose to find and watch it for yourself, you’ll note that several of the lower body tattoos on Apple the adult actress match those of Apple Watts:

This weekend will b a movie booked Friday til Monday so hop LA ready and I.E.

Apple may have appeared in more than five adult films

There are several videos that come up in that cursory Google search, though, that don’t reflect anything on Apple’s IAFD page. The most widely viewed of these appears to be another clip in which Apple is referred to only by her first name, and in which her male co-star identifies himself at the end of the clip as the legendary Nat Turnher.

In fact, there are several clues in the clip that suggest there are more than five Apple Watts adult films. In the intro to the Nat Turnher scene, Nat says “Happy New Year 2008,” and notes that this will “probably” be his last scene of the year ending, meaning 2007. Nat also gives a shoutout to himself and says he’s filming the scene on his birthday.

Because the actors are clothed for several minutes at the outset of the scene, we can show you a screencap from this one: 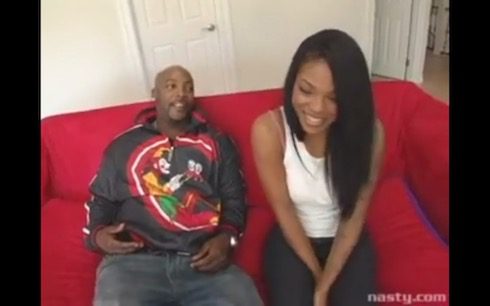 According to the Internet Adult Film Database, Nat Turnher’s birthday is December 2nd, meaning Apple and Nat’s scene was shot on that day in 2007 and released sometime in 2008. But, as we noted in the list above, neither of Apple’s 2008 films feature Nat Turnher at all: her scene in Black Bubble Butt Hunt 6 is with Rico Strong, and in Phatty’s Rhymes and Dimes 6 she appears alongside Brian Pumper.

So, we haven’t yet been able to discover the name of this particular film, meaning there’s at least one more entry in Apple’s adult film catalog yet to be logged. (It’s also possible that the scene was originally shot for a website, not a home video release; IAFD’s generally thorough archive is rather spottier when it comes to web-only scenes.)

Of course Apple DGAF what anyone thinks about her past

We reached out to Apple for a comment on her brief career in adult entertainment already having a pretty good idea what she might say. In just a half-season of Love & Hip Hop Hollywood, Apple has already established herself as forthright, fiercely loyal, and determined to provide for her family above all. It wouldn’t be like her to make any excuses, and she did not.

“Adult sites, I done those 15 years ago, those are so old…” Apple told us. She added, “I just feel what ppl expect [is] ‘I’m a stripper, I’m going to want sugar daddies, any stripper always do.'”

And that was all — other than a giant red heart emoji in response to our thanking her for the comment. During a season in which Lyrica’s alleged dalliances have been the biggest storyline and Safaree Samuels just inked a seven-figure deal to model for his own sex toy, it shouldn’t be shocking that one of LHHH’s cast members dabbled in p0rn. (Cue the obligatory mention of Ray J.)

So, to answer the question: Yes, there are Apple Watts adult films out there. There may even be more out there, waiting to be discovered. There are also more Love & Hip Hop Hollywood episodes in store for Apple, starting with the remainder of Season 5, Monday nights at 8 on VH1.