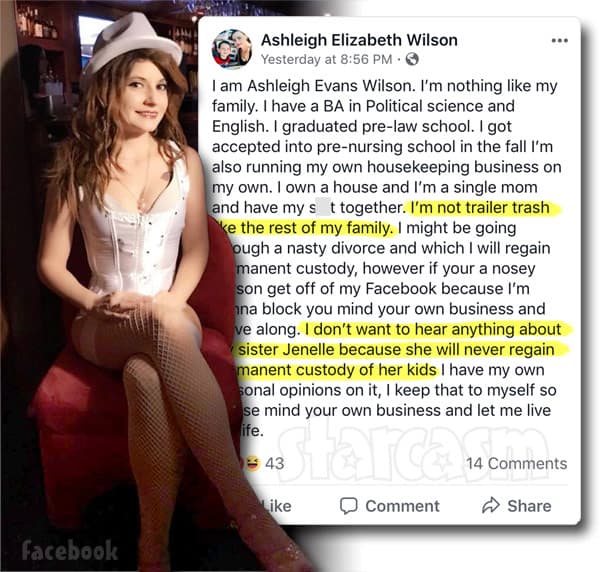 The estranged sister of Teen Mom 2 star Jenelle Eason wants to make sure everyone knows that she is not like the rest of her family! Ashleigh Wilson, who has had a VERY acrimonious relationship with Jenelle over the last ten years, took to Facebook on Sunday to clarify:

I am Ashleigh Evans Wilson. I’m nothing like my family. I have a BA in Political science and English. I graduated pre-law school. I got accepted into pre-nursing school in the fall I’m also running my own housekeeping business on my own. I own a house and I’m a single mom and have my sh*t together. I’m not trailer trash like the rest of my family. I might be going through a nasty divorce and which I will regain permanent custody, however if your a nosey person get off of my Facebook because I’m gonna block you mind your own business and move along. I don’t want to hear anything about my sister Jenelle because she will never regain permanent custody of her kids I have my own personal opinions on it, I keep that to myself so please mind your own business and let me live my life.

As Ashleigh hints at in her post, she actually lost custody of her youngest son Atlas last year. The ensuing custody battle with Atlas’s dad Lee is very reminiscent of the crazy, over-the-top drama that has made Ashleigh’s sister a notorious international celebrity — including a roadside kidnapping, doxing, accusations of prostitution, etc. Click here for a complete recap of all of Ashleigh’s custody issues with Atlas.

As far as owning her own house, that was due mainly to the financial assistance from Ashleigh’s mom Barbara. Barbara also takes care of Ashleigh’s oldest son Gabriel often, including most weekends. I can only hope that Ashleigh is not including Barbara when she refers to “the rest of my family” being “trailer trash.”

UPDATE – Ashleigh responded to a commenter who pointed out that “in reality your momma helped buy your house.” Ashleigh flatly denies the claim. “No actually she did not,” she writes, before then revealing that actually she did. Here’s how Ashleigh explained: “She gave me a small portion towards the down payment as a early birthday present. I saved almost over $20,000 on my own working two and three jobs busting my ass. I’ve been working two and three jobs since I’ve been 14 years old and just shy of my 32nd birthday this is the third piece of real estate I bought my entire life.”

Speaking of Jenelle’s kids, Ashleigh rubbed some serious salt into Jenelle’s wounds with a photo posted one week after a judge denied Jenelle and husband David Eason’s attempt to regain custody of Ensley, Kaiser, and Maryssa. The photo included Ensley and Jace, who are currently in the custody of Barbara Evans, along with Ashleigh’s oldest son Gabriel: 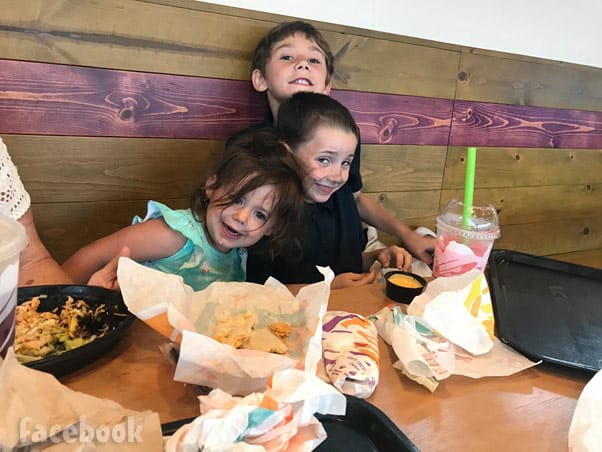 “My sweet niece and nephew and son ❤️❤️,” Ashleigh captioned the photo. I simply cannot imagine how furious Jenelle must be over the fact that Ashleigh can be with her children outside of court-approved supervised visitations and she can’t!

Earlier today, Ashleigh offered up some of her co-parenting expertise:

I’m all about co parenting. But at the end of the day, if your leaving your kid off to a family member or baby sitter while you party or shack up with a gf/bf avoiding all parental responsibility you shouldn’t have custody. If the children want to be with the other parent, you should respect his/her wishes. Especially if the other parent can provide a better life for that child. I’m so tired of hearing of moms/dads dumping kids off because the parents can’t seem to get their life in order or grow up and step up.

Speaking of shacking up with a boyfriend, it appears as though Ashleigh is currently in a relationship! She revealed on Sunday that she is dating a new man by changing her Facebook relationship status to “In A Relationship” and writing: “Someone finally understands me and loves me and my boys unconditionally ❤️❤️”

After posting about her relationship on Facebook, Ashleigh added in the comments: “I’m not one to post relationships on my Facebook. But I promise you, he’s a keeper!! He’s from Tallahassee Florida❤️❤️.”

One of Ashleigh’s followers asked if her new man has any friends. “Let’s just say he’s an upgrade from my ex Lol ? ,” Ashleigh responded, which didn’t really address the question. “He’s real man, not a mamas boy sho can’t take care of our son.”

Jenelle has been biting her tongue about a lot of things on social media over the past month as she continues to post videos and photos from her blissful (and childless) homesteading life alongside her husband David Eason. But, something tells me that she will not be able to resist responding to Ashleigh’s comments! We will certainly keep an eye and ear out and update the post if Jenelle does respond.

My sister is psycho y’all. Don’t believe her. She doesn’t know anything about my situation. I don’t speak to her. ?

Ashleigh, don’t let me post the file I have saved just for you on my computer. Dont speak about my parenting when your skeletons are WAY worse than mine. And you have all these degrees? ? Riiiight, only your GED and CNA. ?

Meanwhile, here are a few of photos of Ashleigh’s family (without Ashleigh) having some fun last week, courtesy of Barbara:

Myrtle Beach and I was not at the Winery.Cardboard cutouts all over Broadway at the beach ?