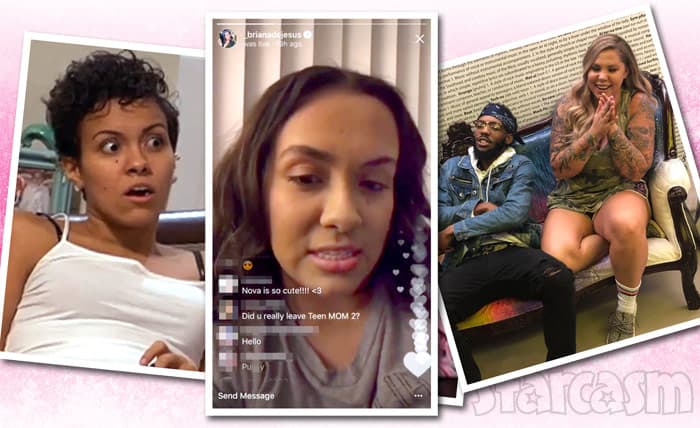 The fallout continues after this weekend’s Teen Mom 2 Reunion altercations between Kailyn Lowry and the DeJesus family, including Brittany DeJesus reportedly pulling Kail’s hair on stage. After the brewhahas (recap below), Briana DeJesus reportedly walked off stage, told producers she quit, and caught the next flight home to Florida. During an Instagram live stream on Tuesday, Briana confirmed that she has left the show.

“Did you really leave Teen Mom 2?” a viewer asked. “Yes I did,” Briana stated flatly. “I’m DONE!” she emphatically added.

Briana really did quit from r/TeenMomOGandTeenMom2

So does this really mean that Briana DeJesus is done with Teen Mom 2? We dusted off our Reality TV Predictatron 3000 and input all of the information above to find out the odds of it actually being true: 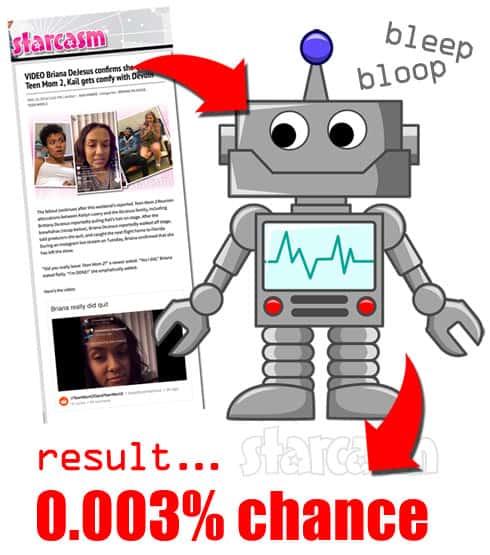 I don’t believe for a second that Briana DeJesus is seriously quitting Teen Mom 2. Unlike some of her co-stars, who have “quit” the show an untold number of times, Briana actually knows what life is like without an MTV paycheck — and it simply makes no sense for her to walk away.

All of this petty Real Housewives bicker drama doesn’t really mean anything. To be honest, Briana had way worse REAL DEAL drama when the MTV cameras weren’t rolling. Anyone remember all the vileness between Briana and her ex Shoc, including revenge p0rn being posted online, etc.? What’s her biggest drama now? Sh*t talking from Kail over Briana’s relationship with Javi, when Briana has stated that Javi was only interested in her intitially for a story line on the show anyways? So silly.

Meanwhile, in case you missed it, Briana spoke with The Hollywood Gossip and The Ashley’s Reality Roundup about what went down at the Reunion, and I combined that with The Ashley’s on-set sources to compile a recap of what happened.

Kail sent Briana a message saying that she wanted to talk about their issues without the cameras being present. Briana agreed, and the two met in a room with the camera crew outside and three security guards inside.

The two ladies sat across a table from each other and things got heated as their discussion went quickly from Javi (lol) to what each had said about the other’s children. “Briana told Kail that she only did it because Kail talks about her kids, which Kail denied,” The Ashley’s source says. “Briana then said something like ‘That may be true but you do talk about Jenelle [Evans]’ kids, and that’s not right either.”

That REALLY angered Kail and she “said something to Briana among the lines of, ‘That has nothing to do with you. Get up now because I’m going to beat your ass.’”

Briana refused to get up and suggests that Kail was bluffing about actually attacking her because she went out of her way to make sure the security guards could hold her back. “Kail knew what she was doing,” Briana told The Ashley. “In that meeting alone she could have jumped across the table because we were at arm’s reach but she decided to walk around it where all the guards were.”

Briana doubled down on her story — and taunted Kail — with a deleted tweet:

After the off-camera tête-à-tête (although I’m sure the ladies were miked up), Kail and Briana were scheduled to film on stage together for an “Unseen Moments” segment. When Briana arrived to the stage, she tells The Hollywood Gossip: “the only person I saw was Kail sitting down so I just ran up. Guards got to me. I slipped and fell trying to get over the table to get to Kail and then my sister got into it.”

Briana adds: “I do know that my sister tried to stop me at first when l ran out on the stage, but then Kail started to talk sh!t to Brittany, so Brittany got upset. I don’t want anyone to think we tried to jump her, cause we didn’t.”

It’s beginning to look like the next season of Teen Mom 2 will open just like the current one: with multiple episodes of just backstage Reunion drama. Is that something that will make you more or less likely to tune in? Let us know in the comments!

Meanwhile, here’s an interesting photo that hints at a potential romantic plot twist: 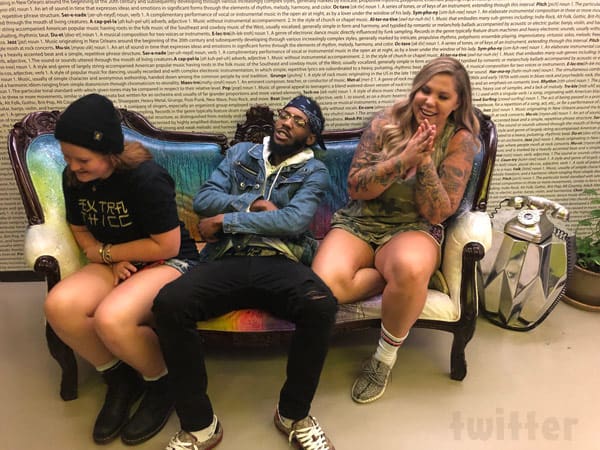 That’s Kail with Briana’s ex (and Nova’s dad) Devoin Austin getting couch cozy together. (On the left is Kail’s bestie, Bones.) “When you’re the last ones on set & the entire weekend has been a sh!tshow,” Kail tweeted along with the picture. Turnabout is fair play, right? All I know is that Vee better be checkin’ Jo’s DMs for some Briana slidin’!