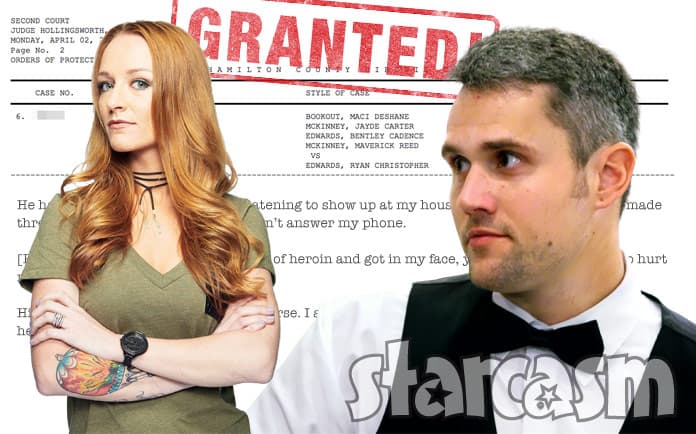 A Tennessee judge has granted a mutual restraining order between Teen Mom OG stars Maci McKinney and Ryan Edwards meaning that the two cannot be within 100 feet of each other for the next two years!

Maci filed for a temporary protective order on March 23. “He has left voicemail messages threatening to show up at my house and take my son,” Maci claims in the filing. “He has made threats to show up and hurt me if I don’t answer my phone.”

There was an initial hearing scheduled at the beginning of April, but that got pushed back until today. According to E! News, Maci and Ryan were both present in court today and a Hamilton County Circuit Court Public Information Officer said of the result: “The judge dismissed the ex parte order of protection and then entered a mutual restraining order.”

Ryan’s attorney Jonathan Turner says that “Ryan agreed to this outcome to make it easier on everyone and not go through a formal process of a trial.” He adds the restraining order does not prevent Ryan from seeing his son Bentley:

We did agree to a restraining order where Ryan will not go within 100 feet of Maci and her current husband and their two children. Ryan has no exclusions with Bentley and is still able to see his son under the new restraining order. This gives Ryan a lot more protection against any false allegations, allows him to avoid getting arrested without a hearing first, and allows him to be around his son most importantly.

“Moving forward,” Mr. Turner adds, “Ryan hopes everyone can get through this without any issues and that he can see his son.”

It is unclear what happened with the protective order filed by Maci’s husband Taylor McKinney. Taylor’s filing including some very startling accusations against Ryan, including a threat to “show up at my house and put a bullet in my head.” My guess is that Taylor was included in the mutual restraining order, but there was no mention of it by E! News or specifically by the Hamilton County Circuit Court Public Information Officer they spoke with.