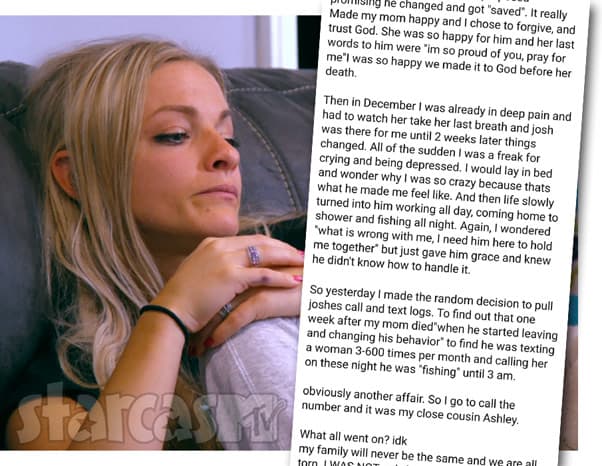 Teen Mom OG star Mackenzie McKee has changed her relationship status on her social media accounts to “single” after she reveals on Facebook that she caught her husband Josh McKee having “obviously another affair,” this time with her cousin. According to the post, Mackenzie recently checked Josh’s photo and text logs and discovered that he and her cousin began talking and texting just a week after Mackenzie’s mother Angie Douthit passed away in December.

Mackenzie begins her Facebook post by admitting that she is aware that other people have their struggles too, some of which are harder than hers have been. But she says “life has really thrown me some huge curve balls” as she openly wonders how she’s gotten through and “made it here.”

Mackenzie then begins to explain what happened, beginning with Josh’s past infidelity that was featured on the show.

“Obviously, the world knows Josh had an affair last year, and then months later repurposed, promising he changed and got ‘saved,'” Mackenzie says. “It really made my mom happy, and I chose to forgive, and trust God. She was so happy for him and her last words to him were ‘I’m so proud of you, pray for me.’ I was so happy we made it to God before her death.”

Mackenzie then moves to her mother’s passing and describes some of what Teen Mom OG viewers have seen this season with her not handling Angie’s death very well, and Josh distancing himself from her during this tough time. “In December, I was already in deep pain, and had to watch her take her last breath, and Josh was there for me,” Mackenzie says.

“Until 2 weeks later, things changed. All of [a] sudden, I was a freak for crying and being depressed. I would lay in bed and wonder why I was so crazy because that’s what he made me feel like.”

Mackenzie says that the emotional distancing from Josh soon turned into physical distancing. “Life slowly turned into him working all day, coming home to shower, and fishing all night,” Mackenzie reveals. “Again, I wondered: ‘What is wrong with me? I need him here to hold me together.”

Fast forward a few months and Mackenzie decided to do a little checking. “So yesterday I made the random decision to pull Josh’s call and text logs,” Mackenzie writes. “To find out that one week after my mom died, ‘when he started leaving and changing his behavior,’ … he was texting a woman 3-600 times per month and calling her on these nights he was ‘fishing’ until 3 am.”

Mackenzie describes the relationship as “obviously another affair.” She says she called the number “and it was my close cousin Ashley.”

Here’s the rest of Mackenzie’s post in its entirety:

What all went on? Idk. My family will never be the same and we are all torn. I WAS NOT only hurt by him, but by her.

I have cried until my eyes were swollen shut. I am in utter shock. I’m now opening my eyes to what a horrible man Josh has been. He has been a lie. And how can you watch your wife lose her mom and make these decisions.

I’m sad for my kids, I love Jesus and I loved my family. People have tried to tell me for year Josh doesn’t love me and I just made excuses for him.

But today is the day I walk away. Pray for me, that I can function, feel worthy again and find hope. Pray for my kids, I always wanted my family to work so they don’t have to live in two different houses. I was 100% committed to Josh and so much I don’t understand..

TEEN MOM Mackenzie McKee @DouthitKenzie opens up about how painful it is to lose her mother; feels sick over editing of funeral episode https://t.co/PrFJ2dLx1i #teenmom #teenmomog

Mackenzie continued to express her frustration with responses to tweets during Tuesday night’s episode of Teen Mom OG:

MACKENZIE: Literally all that we are. No love here sis.

TWEET: Why does Josh just sit there with his head down while MacKenzie talks?

MACKENZIE: 10 years of my life….. literally. Nothing to him.

TWEET: Does Josh talk? He just sits there and mumbles once in a while. Mackenzie seems pretty mature, why is she with this loser? U can do much better!

TWEET: Gannon and Josh are the same age emotionally.

So far, Josh has not responded to Mackenzie’s post publicly. Some may expect that given his fondness for few words, but Josh has engaged online during previous fights with Mackenzie involving cheating allegations.

Numerous fans are openly wondering who the cousin is. Mackenzie does have a cousin named Ashley on her father’s side, but it’s unclear if that the woman that Josh was allegedly having the “affair” with.

Of course, the big question that needs to be answered is: What in the world was Josh talking to woman about every night until 3 am? It seems like it would be extremely hard for him to hold up his end of a phone or text conversation with just grunts and nods.

We continue to wish Mackenzie and her kids the best. She really has been through some extremely difficult times of the past couple years, and we hope that finally splitting from Josh for good will be the beginning of a much better and potentially happier chapter for her.

UPDATE – Mackenzie has wasted no time turning her lemons into lemonade. Less than 24 hours after her Facebook post, Mackenzie shared a sponsored link on multiple social media platforms linking to a story about the cheating allegation. Here is a screen cap of her Instagram story post linking to the article with the headline: “Josh cheated on me with my cousin 💔😰” 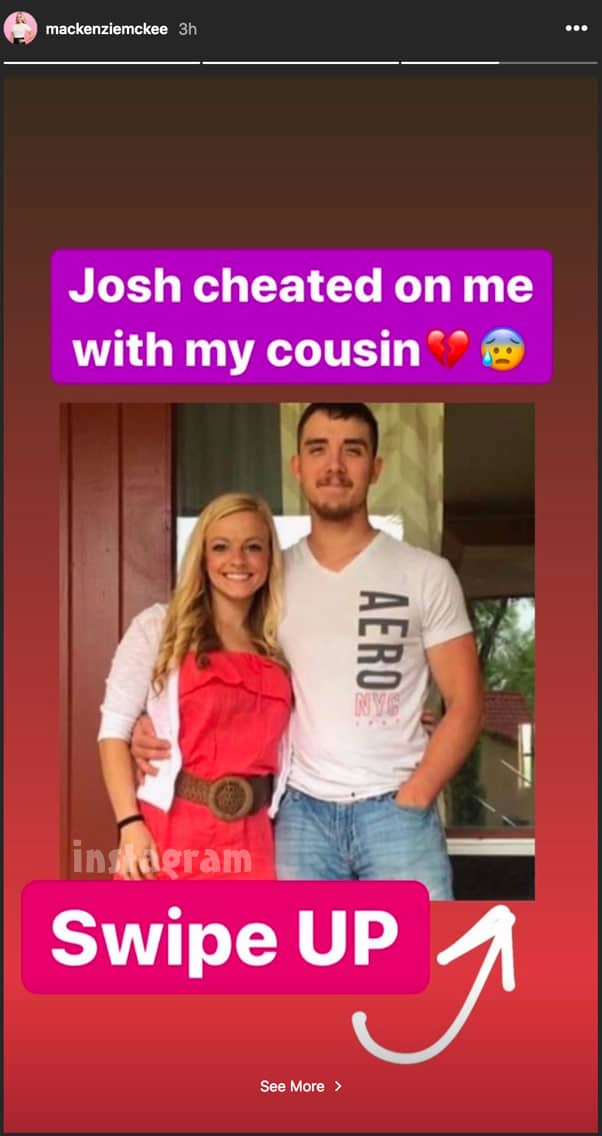 Cashing in on an unfortunate situation isn’t necessarily a bad thing, but many followers are a bit suspicious because Mackenzie has a long history of faking break ups and more to garner headlines. Here is an excerpt from our 2017 post after Josh and Mackenzie got into a very nasty social media feud amidst allegations that she cheated on him:

In his anger, Josh also brings up the string of headlines Mackenzie made a few years ago, including a reported sex tape and multiple divorce reports. (Remember Josh alleging flushing his wedding ring down the toilet?) Mackenzie says that was all the doing of her manager, Gina Rodriguez. (To Mackenzie’s credit, all of those headlines are indeed part of the GR Media Firm formula. Also part of that formula is breast augmentation surgery, which Mackenzie also did, but Josh wasn’t complaining about.)

For some reason, Josh played along with a lot of the allegedly made up stories that made him look bad. However, I simply cannot imagine that Mackenzie’s cousin would play along with this most recent accusation? Perhaps the true test will be whether or not Mackenzie actually makes the split official. Despite their numerous break ups, court records indicate that neither Mackenzie nor Josh have ever actually filed for divorce. As of May 20, there is no divorce filing, but we will continue to check.

UPDATE – Mackenzie has since revealed a lot more about what led to her split from Josh, including details on his “affair” with her cousin.

UPDATE – Mackenzie is now trying to walk back her “affair” claim and insists that she never used the terms “cheating” or “banging.”