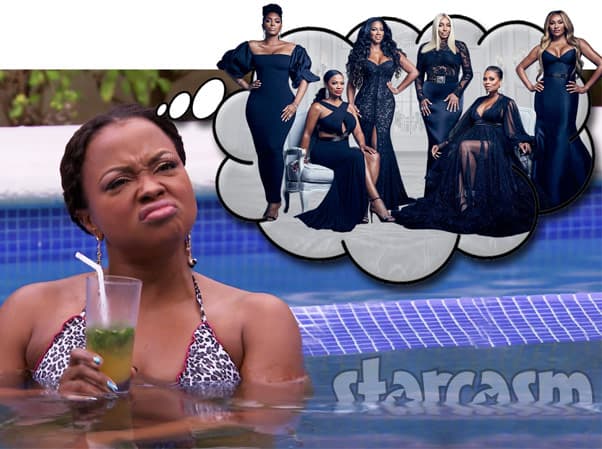 Could Phaedra Parks be returning to The Real Housewives of Atlanta?! Rumors about reality television’s most famous funeral directing attorney returning to Bravo have been swirling for days, and now the site that initially broke the news about Phaedra’s firing is saying those rumors are legit!

B. Scott has sources telling her that Phaedra “is is exploring a return to the show.” However, it appears that if Phaedra does come back, she won’t be holding a peach — at least not initially.

“While earlier reports claim Phaedra could return as a full-time housewife, our sources say that as of now she’s being considered to return in a ‘friend’ role,” B. Scott reveals.

Part of what initially fueled the fires of the Phaedra return rumors are the recent reports that show OG NeNe Leakes is considering leaving the show. Bringing Phaedra back would give NeNe another ally on the series, and would certainly be a motivation for her to stick around.

In case you missed it, NeNe and Phaedra reconnected a few years ago. “Phaedra, like many people, reached out to me when Gregg was sick,” NeNe revealed on the Watch What Happens Live with Andy Cohen Holiday Special in 2018.

That same month, NeNe and Phaedra got together at Nene’s birthday party. NeNe then surprised Andy Cohen in early 2019 when she brought Phaedra with her to crash his baby shower.

Of course, the biggest stumbling block to Phaedra being able to return to The Real Housewives of Atlanta is Kandi Burruss. The main reason Phaedra was fired in the first place was because she started the horrific Kandi Burruss rape rumor.

Kandi spoke with People in July of last year, and it was clear that she was nowhere close to forgiving Phaedra:

I just find it very sad that she has no remorse for what she did. She didn’t see anything wrong with that. I feel like if anybody did what she did to me to her sons in the future, she would have a totally different outlook on the situation. I just think she should just rethink it. If she doesn’t that’s cool. She’s canceled in my book anyway.

The ratings for The Real Housewives of Atlanta have been in a bit of a slump recently, even with so many people being forced to stay at home during the current COVID-19 pandemic. So, I am guessing that Bravo gave Kandi the hard sell on Phaedra’s return. I’m also guessing that Kandi’s acceptance would hinge on some sort of apology from Phaedra — whether aired or not.

VIDEO @PhaedraParks talks about crossing the picket line to join @TraciBraxton on #BraxtonFamilyValues after her 4 sisters went on strike earlier this season: https://t.co/XqdVnu7rXO + Phaedra talks about potential return to #RHOA and more!

As far as Phaedra’s take on returning to the show, it’s something she has remained open to. After joining Braxton Family Values in 2018, Phaedra did an interview with Entertainment Tonight in which she talked about her time on RHOA as well as her potential return. From our article:

At this point in the interview, ET cuts to a clip from the RHOA Reunion in which a very emotional Kandi Burruss lashes out at Phaedra and Porsha Williams for allegedly accusing her of rape — an accusation that reportedly led to Phaedra’s abrupt departure from the show.

Phaedra states that she has “no regrets” about her time on the show before being asked if she had anything she still wanted to say to Kandi. “Whatever I’ve said, I’ve already said it,” Phaedra replies. “That was now, two years ago? So, yes, I’m living in 2018.”

Phaedra stops short of ruling out a return to Real Housewives however. “I have no plans to, but I would never say never,” she says coyly. “But I’m very happy with what I’m doing now.”

If Bravo is really looking to drum up the ratings by inviting Phaedra back to RHOA, then perhaps they should considering sending an invitation to Angela Stanton as well. Angela Stanton was convicted alongside Phaedra’s ex-husband Apollo Nida, and later published a book stating that Phaedra was actually the mastermind behind a lot of the crimes that she and Apollo were convicted of. Phaedra filed a lawsuit, and then dragged it out for years before eventually dropping it just before trial in 2016.

“I was sued for 30 Million Dollars,” Angela said after the case was dropped. “This lady [Phaedra] held my life up for 5 years just to turn around and dismiss her case against me with prejudice, days before our scheduled trial date. She can never come after me again. I am finally free!”

This story never got as much attention as it should have. Angela flatly stated in a book that Phaedra Parks masterminded multiple felonies. It was not suggested or hinted at. Phaedra, who is an attorney herself, filed a defamation suit. Phaedra dropped the suit just before it went to trial? As Phaedra would say, “Mmmm hmmm.”

You can click here for a full recap of the lawsuit, as well as our interview with Angela in 2017.

In an unexpected twist that could certainly make for some interesting conversations on RHOA, Angela was pardoned for all of her crimes earlier this year by Preside Donald trump. (Angela has been a vocal supporter of Trump.)

UPDATE – It doesn’t appear that Angela Stanton will have time to join The Real Housewives of Atlanta because she recently announced that she plans to take advantage of her pardon by running for congress!