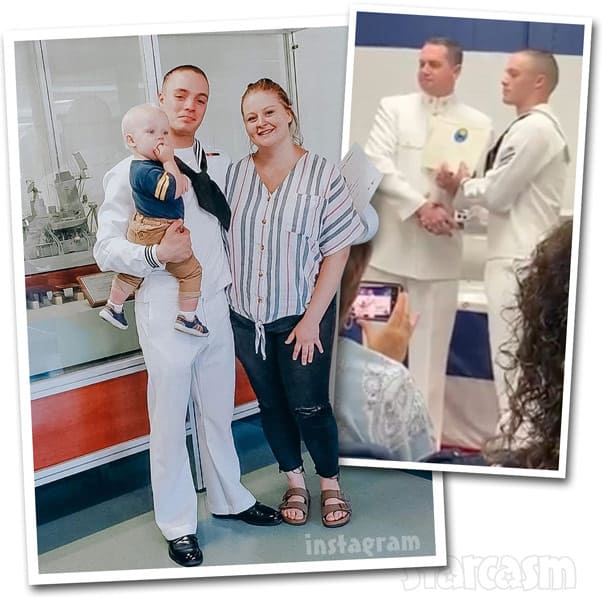 We have more good news regarding Unexpected Season 2 couple Laura Barron and Tylor Strawmyer! The last time we checked in with Tylor was in November, just after he graduated Navy boot camp. Fast forward nine months and Tylor has officially taken the next step in his Navy career as he graduates A school.

Laura shared a couple photos and a video from Tylor’s graduation on Instagram. “Congratulations on graduating A school,” Laura wrote. “I’m proud of you ❤️❤️”

Laura revealed on her YouTube channel that the family is moving from Chicago to San Diego, where I assume Tylor will be stationed. Here’s the video in which you can see their empty apartment and loaded up U-Haul truck:

The A school graduation bookmarks the end of another chapter in this couple’s whirlwind relationship over the past two years. In July of 2017, the teens found out that Laura was pregnant. They were then cast on Unexpected prior to welcoming their son Lucas on February 12, 2018.

Tylor and Laura secretly got married on July 28, 2018, and soon after that, Tylor joined the Navy on August 6. “It’s time to get a new journey started and show people how capable I actually am,” Tylor captioned a gallery of images of himself signing up. “Ready to support my family and do anything and everything to make them happy. Can’t explain how happy I am to be a Future Sailor.”

The newlyweds then went on a honeymoon cruise to Honduras, Belize, and Mexico before Tylor headed out to Navy boot camp near Chicago.

Tylor completed Navy boot camp in late November, and then went on to A school.

Then, in April, Laura dropped a major bombshell when she revealed that she was pregnant with her second child and due in October! Laura is currently 28 weeks.

Many viewers (myself included) are kind of bummed that Laura and Tylor were not asked to be back for another season of Unexpected, but you can keep up with both of them and their family via Laura’s YouTube channel.

Congratulations to both Tylor and Laura! Happy endings featuring couples from teen parent reality shows are few and far between, and I am certainly pulling for these two!