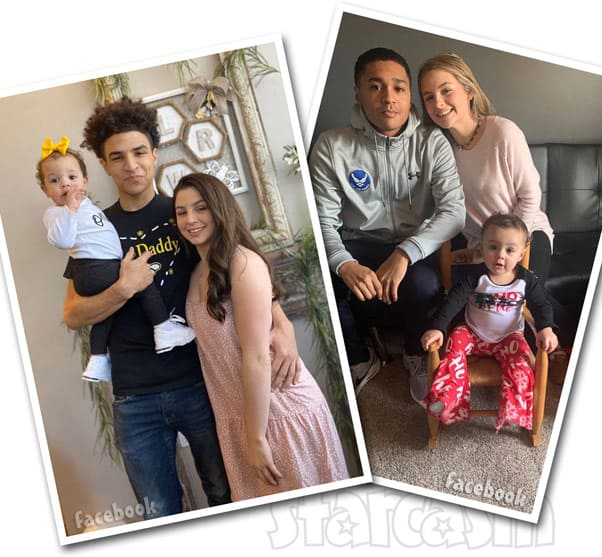 We have some major updates on Unexpected sibling moms Tiarra and Tyra Boisseau, including a pregnancy, a break up, a boot camp graduation, and a COVID-19 diagnosis.

Living up to the show’s title, the pregnancy news isn’t in regards to either of the Boisseau sisters. The one expecting is Julie, the grandmother of Tyra’s daughter Layla! (Julie is the mother of Layla’s dad Alex Wilson. She was featured often on the show and on the Reunion.)

Julie first publicly announced that she was expecting again with a Facebook post on April 15. “20 years later here we go again!!!” she wrote, adding the #7weeks2days hash tag and a pregnant woman emoji. She would later reveal that she is due on November 30.

The post was met with numerous shocked comments. Tyra’s reply was fully supportive: “Here for you always me and Layla can’t wait 💗💗.”

On May 11, Julie shared a couple sonograms and captioned them by writing: “Y’all I’m so in love all ready meet my peanut!!!”

Julie hasn’t revealed any information about who the father is, but she did seem to drop a hint on April 25. “When a blast from the past comes back in ur life and it’s everything u ever wanted and more no names mentioned right now but y’all will see!!!” Julie wrote. “He has my heart ❤️ again!!! Love u babe!!!” 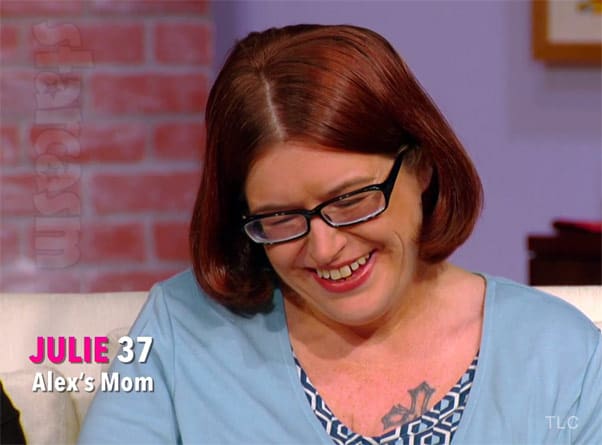 Unexpected viewers will probably recall that Alex was actually raised by his grandmother. In a very emotional scene during the Season 3 Reunion, Julie was asked about that. She explained that she left when Alex was very young, and she broke down as she revealed that Alex had no memories of her from when he was younger.

Alex has yet to address his mother’s pregnancy publicly on social media.

TYRA AND ALEX BREAK UP

Speaking of Alex, Tyra revealed back in January that she and him have split up. Here is the video of Tyra’s Very mature break up announcement video, followed by a transcript of some of what she had to say:

“This journey that I’m going through in life — being a mother, being a college student, trying to always put Layla first — some things in my life have changed. A lot of things have changed, and mine and Alex’s relationship [is] one of them.

“…Before me and Alex’s relationship, my body was really good, and now my body isn’t. So, I have a lot of trust issues — for other reasons as well. And it’s not fair for him to hear me and deal with my trust issues back at home while I’m at school. So right now we’re focusing on raising Layla and being the best parents for Layla. And when I get out of school, we’ll worry about our relationship status because that’s not very important to me right now. What’s important to me is getting my education that I came here to do, making sure that Layla is always taken care of and she comes before anything, and really just figuring out my life and what I want for myself and what I want for Layla’s future.

We've got bios, photos, baby details, and daddy details for three of the new moms featured on the third season of @TLC's #Unexpected! Meet Rilah, Tyra and Tiarra – as well as their daughters and beaus! https://t.co/3oWtij4gnk

“…Me and Alex will continue raising our beautiful baby girl together. No matter what happens to our relationship status we are going to be the best parents to Layla that is possible. So he does the best job while I’m at school taking care of her, and I could not have asked for a better person to do that and to support me through my journey getting my education. Thank you guys for all supporting me and my choice.”

Last Wednesday, Tyra shared the concerning news that her grandmother has been diagnosed with COVID-19. The heartbreaking diagnosis came just one day after her grandmother left the hospital after recovering from a surgical procedure. Here is Tyra’s full post, shared on Facebook last Wednesday:

Just asking for everyone to say a prayer for one of the sweetest grandmothers I could ever ask for. My grandmother has been going through medical problems for a while now. Although I’ve been visiting her in hospitals in between going back and forth to college while being the best mother I can for Layla I’ve always known some how she’s going to get through all this and come back to her grandchildren and her greats. She’s missed many birthdays and holidays that she just made feel so special just by being there.

She has been in a rehab center trying to recover from a surgery she recently has had and although it’s hard enough her just being away a couple weeks later COVID 19 started making its way in Kentucky so her facility allowed no visitors. We were glad they did this for our grandmothers safety. We were so lucky to get this virus away from her especially in a time like this.

This past Wednesday she was released from the facility.. it is stated that there was an issue with her insurance that no one was even was aware of and they were going to start charging for her stay there or my grandfather was going to have to come get her. He made the choice of leaving the house to get her during all this for there was no way he was going to be able to afford the rates because of all medical history before.

Wednesday she explained to me that she was very sick. Thursday morning after spending one night at home the doctor had to come visit my grandmother and I Thank God he did. She was sent back to the hospital Thursday and tested positive for COVID 19. She is currently in the hospital but she is actually doing so well and hasn’t even had a fever. I pray no one has to worry about their loved ones who are so vulnerable to this virus at this time. 😓

Unlike Tyra and Alex, it appears that Tyra’s sister Tiarra and Dee Ragland, the father of Tiarra’s daughter, are still together. Well, not physically together. The couple revealed back in March that Dee had enlisted in the United States Air Force and he was headed to Goodfellow Air Force Base in Texas for 8 1/2 weeks of basic training. Dee shared this message on Instagram on March 17:

As I take off to basic training for 8.5 weeks I just pray God watches over my girls extra since I won’t be able to. Every inch of my body will miss them every day, but they know I’m doing it for our family. These two are my entire world and it will always be my job to make sure they’re okay. I love you two more than you’ll probably ever know and I’ll see you soon ❤️

The current coronavirus pandemic sped up the timetable a week, and Tiarra revealed last week that Dee was done! “7.5 weeks later and it’s graduation day 💗,” Tiarra wrote on Instagram on May 7. “Sucks we can’t be there but we’re still so happy for you! 💓💓”

Here’s a very recent photo of Dee in his Air Force duds:

Stacked every chip on myself, time to collect 🗣

Tiarra later revealed that Dee is headed to tech school next, and he hopes to be finished some time in August.

I don’t think it has been confirmed, but it has been reported that Tyra (and Tiarra?) will be back for Unexpected Season 4. As we previously reported, Chloe Mendoza will not be back, Rilah Ferrer will not be back, and McKayla Adkins has stated that she is not filming for the new season either. Hailey Tomlinson (but not Hailey Tilford — aka Hailey 2) looks to be the only other mom returning.

Want to get in on the conversation about this post? Join us over on Instagram (below) and let everybody know what you think!