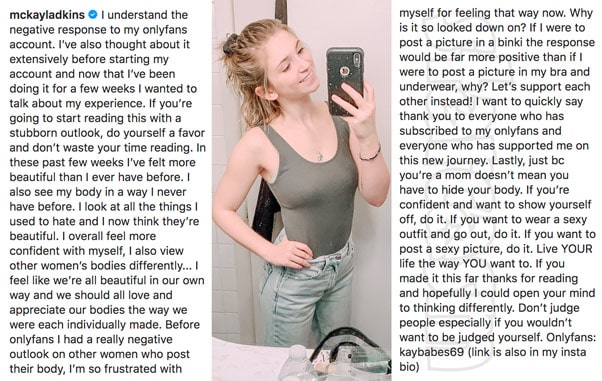 Unexpected OG McKayla Adkins revealed earlier this year that she has not been asked to return for another season of the show. After breaking up with her ex Caelan Morrison in January, the single mother of two is now living with a female roommate. With rent and bills to pay, and no TLC income, McKayla has started selling nude photos, videos and more via OnlyFans.

The 19-year-old announced her OnlyFans account last month, initially with the account name kayadkins. She soon relaunched under the new name kaybabes69. (I can’t link directly to her account due to advertising restrictions, but you can find it in McKayla’s bio on her Instagram account.)

In case you were unaware, OnlyFans is a social media platform that allows you to sell subscriptions to access your content. It is most famous for those wanting to sell adult content, but it could theoretically be used for pretty much anything.

McKayla reportedly kept her content rated PG-13 initially, but she has since started posting nude photos and video for her paid subscribers. At the time of this post, McKayla is charging $7 per month, or you can sign up for three months at a discounted rate of $14.70. To give you a rough idea of how prolific McKayla is, it appears that she has uploaded 56 photos and 3 videos to her account at the time of this post.

As you might imagine, McKayla drew quite a bit of criticism for her decision to launch an OnlyFans account with adult content, but she was quick to defend her decision. “Y’all hating on me for making an OnlyFans acct,” McKayla tweeted on April 2. “I’ve made well over my rent already and have plenty of extra cash.. lol brb buying Timmy and Grace some new clothes and shoes 😚😚”

The tweet was just a quick, snarky retort, but McKayla took to Instagram on Tuesday to provide a more thoughtful defense of her decision:

“I understand the negative response to my OnlyFans account. I’ve also thought about it extensively before starting my account and now that I’ve been doing it for a few weeks I wanted to talk about my experience.

“If you’re going to start reading this with a stubborn outlook, do yourself a favor and don’t waste your time reading. In these past few weeks I’ve felt more beautiful than I ever have before. I also see my body in a way I never have before. I look at all the things I used to hate and I now think they’re beautiful. I overall feel more confident with myself, I also view other women’s bodies differently…

“I feel like we’re all beautiful in our own way and we should all love and appreciate our bodies the way we were each individually made. Before OnlyFans I had a really negative outlook on other women who post their body, I’m so frustrated with myself for feeling that way now. Why is it so looked down on? If I were to post a picture in a bikini the response would be far more positive than if I were to post a picture in my bra and underwear, why? Let’s support each other instead!”

“If you made it this far thanks for reading and hopefully I could open your mind to thinking differently. Don’t judge people especially if you wouldn’t want to be judged yourself.”

#Unexpected @mckayladkinss & @Chloe_Mendoza_ are trying out life as blondes! Chloe goes all-in, while McKayla opts for the partial blonde Cruella de Vil look. Check out both ladies' new 'dos and let us know what you think. #quarantinemakeover https://t.co/xuYcciZRIP

McKayla also took the time to respond to some of the comments on her post, including a question about whether or not her grandparents are aware of her OnlyFans account:

COMMENT: There is a difference about loving your body, and posting pictures like this for everyone to see, you have kid’s need to think what kind of example are you setting for them, you are a beautiful girl, no need to show off naked body to get attention

MCKAYLA: I didn’t lower my standards, I gained self love and acceptance of my body. Weird people follow my pages where there isn’t nudity, I can’t keep the creeps away from all of my social media sites 🤷🏼‍♀️

COMMENT: Whatever floats your boat! One question though and not to sound like mean or whatever but do your grandparents or mom know of your OnlyFans account? Do u sis and hope u got tips to put Timmy to sleep without rocking him 😀

MCKAYLA: Yes my family knows I have an OnlyFans. I was embarrassed about it at first and tried everything to keep it private. But once my photos got leaked I realized quickly that, that wasn’t going to happen. Once my parents saw I just explained it to them. I’m 19, an adult and I carefully made the decision to do this. I don’t regret it at all and honestly most of my family doesn’t even care. Bodies are beautiful and me showing mine doesn’t effect me negatively. When I go out in public if I know someone personally who has seen my pictures I don’t feel embarrassed or awkward. If someone has questions about it, I answer. I don’t think it’ll affect my kids negatively either. They still love me unconditionally and see me as mommy and to me that’s all that matters at the end of the day. I know this is a longer response than you probably wanted but I feel like this comment is also probably important for people to read. Haha.

McKayla later shared a post in her Instagram stories about the reactions. “So much negativity on this post,” she began, “but also so much positivity. Thank you to all the people who support me ❤️”

In addition to the revealing photos and videos, McKayla also reportedly offers her services for hire — such as flirty conversations and her ratings of male body parts. According to subscribers who have shared information in forums and on social media, McKayla charges between $20 and $70 for these services.

You can also support McKayla by purchasing something off of her Amazon wish lists, including one that is OnlyFans themed and features a variety of sexy lingerie. Her other lists appear to be a bit outdated as they are all Christmas lists for herself, her son Timothy, and her daughter Gracelynn.

#Unexpected OG mom @mckayladkinss reveals that she isn't currently filming & hasn't been contacted by producers. Plus, she shocks a number of fans by pointing out that her grandpa Tim isn't her biological grandpa! https://t.co/kbWPkTLhvN pic.twitter.com/ncqHZl0Dgm

The OnlyFans debate is becoming quite a common one given how accessible the platform is. Making money with nude photos and videos, or even in person, used to require some sort of intermediary company or boss. And oftentimes, those intermediaries could be greedy, untrustworthy, and/or downright dangerous. OnlyFans has streamlined the process and has made it extremely easy and safe to profit off of your own adult content. The only risk that remains are the people that you “meet” online.

I can only imagine that (mostly) young women everywhere are now seriously faced with a decision whether or not to start an OnlyFans account for supplemental income, or even as a potential full-time job.

It’s been a hot minute since I was in college, but I can only imagine how OnlyFans is transforming the social scene. In that context, giving into peer pressure to have an OnlyFans account would be an extremely negative thing. And, I’m am sure there are horror stories about abusive boyfriends and husbands forcing their significant others to pose for photos and videos to sell via the site. Unfortunately, those horror stories seem inevitable with or without sites like OnlyFans.

#Unexpected parents McKayla Adkins & Caelan Morrison broke up again on their daughter Gracelynn's 1st birthday. Get a full recap of all the drama from social media, which included multiple Instagram live sessions and an apology YouTube video from Caelan. https://t.co/aJaHQPvt5A pic.twitter.com/HHEfXdQsY8

In McKayla’s case, I agree with her argument. She’s a 19-year-old adult who freely decided to do this, and it genuinely does seem to have had a positive impact on her self-image — which has always been pretty low. Will she regret it later? Maybe. Just like she might regret some of her tattoo decisions. McKayla has also expressed the desire to get dramatic (free) plastic surgery, which can lead to some very serious buyer’s remorse down the road. Of course, regretting those kinds of decisions is usually a lot less difficult than regretting something like not using birth control. At least you have to be 18 to get tattoos, most plastic surgeries, or an OnlyFans account.

That’s just my take, though. What do you think about McKayla’s decision to literally sell her moneymakers via OnlyFans?

UNEXPECTED McKayla Adkins gets a nose job, responds to criticism