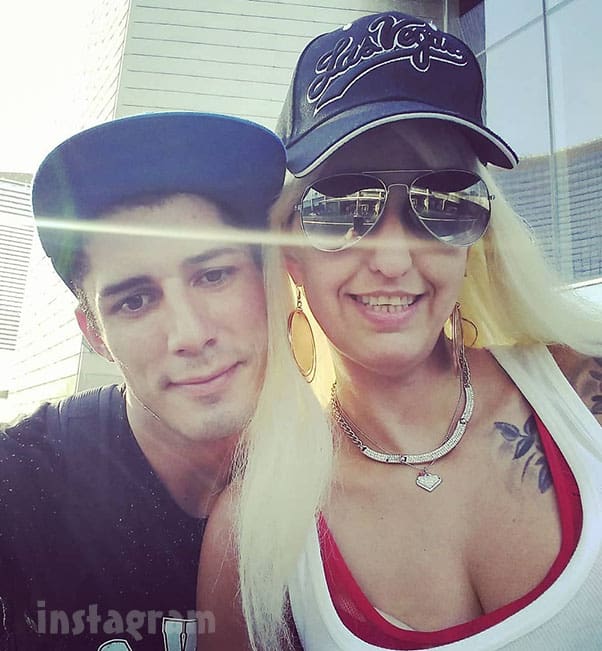 Love After Lockup star Tracie Wagaman died on July 1 at the age of 41, just one week after giving birth to her second child. Luke Loera, the father of Tracie’s daughter, was in jail at the time of Tracie’s passing. He got out of jail on Saturday and shared a video on Instagram publicly addressing Tracie’s death for the first time.

What becomes clear very quickly is that Luke doesn’t know many specifics about Tracie’s passing. “What’s up y’all,” Luke begins the clip. “This is Luke Loera and I know about the news going on. Tracie Wagaman is dead, I guess, according to the news and Starcasm and everything else like that.”

He says there are reports that Tracie died after giving birth. “I have no idea what that means. I don’t even know if it’s true. But I’m telling you right now that I know I don’t have my girl.”

A viewer asked what happened with their newborn daughter. “The baby’s in California or with her brother,” Luke says.

He then moves on to how Tracie died. “I suspect foul play. I don’t know who did this, but whoever did this will pay for this. I think it was foul play. I think she got some type of drug, which was fentanyl. I did a little investigation on myself and I…don’t know all the details.”

At this point, Luke gets very emotional and begins to cry as he thanks everyone for their support.

Luke is an aspiring musician, and he reveals that he recorded a song as a tribute to Tracie. He released the track during a live interview with Amzi Beloved & Friends on YouTube later in the evening on Saturday. I only caught the very end of his interview, which included a playing of the track.

The song begins with Luke’s spoken apology to Tracie for all the problems he caused her while she was alive. The rapping then begins as Luke expresses his love for Tracie.

Luke also says in the interview that he plans to fight for his child. “I am going to get my daughter back,” he says.

Here is Luke’s Instagram video. His YouTube interview has concluded and should be available to watch again soon. As soon as it is I will update with additional information. I assume that Luke went into detail early in the interview about Tracie’s passing and what the situation is with their daughter.

UPDATE – And here it is.

“I don’t know what’s going on,” Luke says near the beginning of the lengthy video. “I’m in the dark still. I can only speculate, that’s all I can do. But I really just want to know what really is really going on.”

In perhaps the most shocking fact revealed in the interview, Luke says he didn’t find out about Tracie’s death until more than three weeks after the fact. “I heard about it whenever I was in jail from my dad…He told me about 22 days later, after she passed. That’s how I found out. I thought she was just probably busy or something. Maybe she was resting due to the surgery, or whatever the case may be. ”

The last time Luke spoke with Tracie was on the day that she died. “I did talk to Tracie right before she passed on the first…She had the baby, she told me. And she said it was a baby girl. I asked her if she was OK. She said that she was. And so, after that, I never heard from her again.”

Luke says they discussed adoption and agreed that was the best choice. However, he says that their adoption plans somehow included the possibility of getting the child back. “We were going to try to get the baby back as soon as we could get ourselves straight, and get ourselves more motivated and out of our situation we were in.”

So where is their daughter now? Luke says he was told that the baby was picked up by her foster parents and is currently in California. Then he says that he has also been told that the baby is with Tracie’s brother. “I don’t know what to believe. I don’t know what’s going on.” Luke reveals he has a call with the hospital scheduled, during which he hopes to find out “who has the baby and how I can go about getting her back.”

In regards to the allegations that Luke physically abused Tracie, he owns up to that.

I know you guys seen the IGs that Katie decided to put up — pictures of her from two different incidents or whatever the case may be…Being a man and being stand up and straight forward, to what happened and everything else like that, I’m not going to lie. Yeah, I did put my hands on her. You know what I’m saying? I understand that it’s not acceptable, but at the same time, you know, people go through hard times and people don’t know what the heck is going on inside of everybody else’s lives.

Luke once again mentions that he suspects foul play and he’s asked to clarify. “What I mean by foul play is I think somebody gave her some different type of pill when she was actually trying to get better. I think fentanyl had to do with a lot of it. I don’t know who gave it to her. I’m still trying to figure that out…I really am kind of really mad about that. Whoever did do that to her, let’s just say that they’re not going to like what they’re going to have in store for them. So that’s all I got to say about that.”

The hosts say that it is their understanding that Tracie’s toxicology report hasn’t come back yet. Then they ask Luke whether or not he has spoken with Tracie’s family.

A viewer asks about the people who arrived in Tracie’s hotel room during her last live video interview because many thought Tracie seemed frightened. “Those are my people,” Luke assures us. “She was definitely not afraid of those people. Those people would protect her because they were under my order — I gave them specific orders to check her.”

Here is the full Amzi Beloved & Friends interview with Luke: