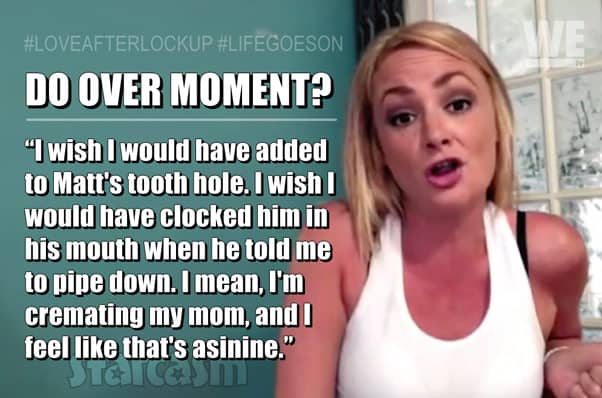 In the roughly six-minute clip, Caitlin answers numerous questions about her failed relationship with Matt and how it has affected her decision making going forward.

In response to two separate questions about her regrets with Matt and whether or not there were any moments that she really wishes she could do over, Caitlin reveals that she wishes she had not bailed Matt out of jail when he got locked up again. “He wouldn’t leave me alone,” she says. “The calls wouldn’t stop. He was demanding. I mean, he was rude! It was the only thing I could control at the time. I could pay his bail, the calls would stop, and he would get off my case.”

Caitlin says that another thing she wishes she could do over was how she reacted when she was talking with the funeral director about cremating her recently deceased mother and she and Matt got into an argument. Matt would eventually tell Caitlin to “pipe down” in the infamous scene.

In addition to what she wishes she had done differently, Caitlin is also asked about what Matt should have done differently. “Matt has worked for, I don’t know, maybe 200 hours of his life? The dude has not really held any type of job down,” Caitlin says, before chastising Matt for going into his construction job interview completely unprepared in another infamous scene featured on Love After Lockup Season 2. 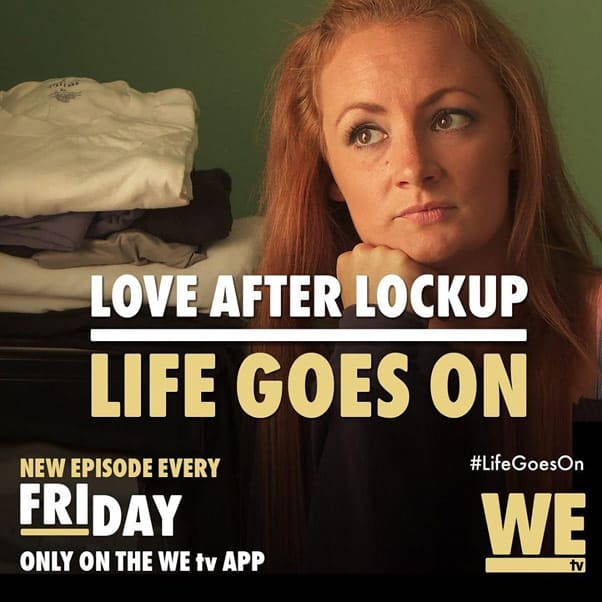 “It’s heart breaking, dudes got great guts, but keeps sellin’ himself short with this sh*t,” Caitlin wrote on our Instagram post about Matt’s arrest. Matt’s mother Kathy came to his defense as well, and she was also very open about his culpability. I highly recommend you click the link to read their comments!

Getting back to Caitlin on Life Goes On… Would she ever consider dating a convict again? Surprisingly, Caitlin leaves that door open! “I don’t know if it’s a yes or no answer,” she says. “I think it’s pretty circumstantial. I just don’t know that I would be so quick to get involved with someone who is still incarcerated. I feel like, let him get out, and acclimate to life, and see how that goes, you know, before I get too crazy involved with anyone. Or even think about it.”

To see all of what Caitlin had to say, including her answer to the question of whether or not she is currently dating anyone, be sure to download the WE tv app and check out Love After Lockup: Life Goes On! New episodes drop every Friday. The network has mentioned Matt in the list of cast members who will be on, so perhaps we will here from him this week? Stay tuned!

In case you missed it, Matt has been arrested twice this year — once for felony possession of a stolen vehicle in January, and then he was booked for meth possession in May. Both cases are scheduled to go to trial next month.