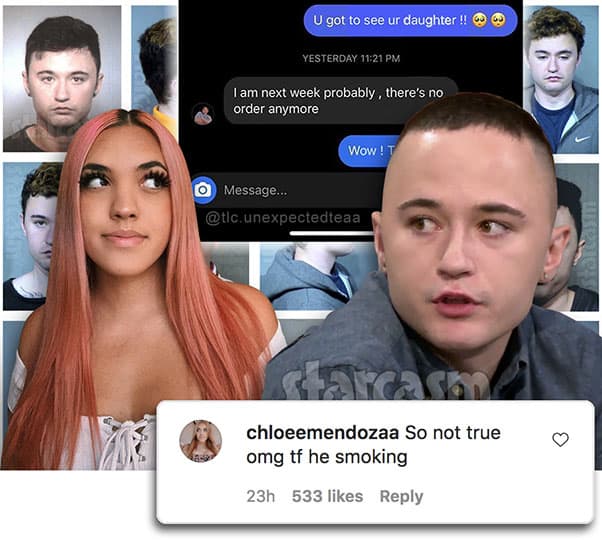 Unexpected dad Max Schenzel hasn’t been able to see his daughter Ava in two years thanks to a restraining order put in place by his ex, Chloe Mendoza. In a series of Instagram posts this weekend, Max revealed that he was finally going to be able to see Ava again due to the order being lifted. Chloe and her mother Jessica responded by shaking their damn heads and calling Max a clown who doesn’t know what he’s talking about. Max responded and seemed quite confident that he was correct.

The recent back and forth started with a vague Instagram post by Max. “I’m so happy,” he wrote. “I can’t even express how long I’ve been waiting for this!” Someone reached out to Max via DM to confirm that he was talking about being able to see Ava again.

DM: U got to see ur daughter!!

MAX: I am next week probably, there’s no order anymore.

The DM exchange was screen capped and posted by @tlc.unexpectedteaa on Instagram. The post drew comments from Chloe and Jessica:

CHLOE: So not true omg tf he smoking.

JESSICA: Omg. I think you would have been notified for a court to drop the order. @chloeemendozaa He can’t just have it dropped. Not sure what imaginary world he lives in. But in the real world we know the truth. Plus he owes 3 years of back child support- totaling around 15k, and he hasn’t seen Ava in 2 years, but yet he really thinks a judge would just let him see her. What a 🤡.

After Chloe and Jessica shared their thoughts on Max’s claims, he later did a Q&A with his Instagram followers while road tripping to San Diego. Here are the entries regarding Ava and the recent dispute:

QUESTION: Don’t you get mad with the TLC groups?

MAX: No bc their priority is to spread negative energy and lies to gain publicity while mine is just the complete opposite so I really don’t pay attention to anyone who associates with anything or anyone from the show, just a bunch of people with too much time on their hands and nothing better to do then bash people because their jealous or insecure.

#Unexpected dad of the year Max Schenzel offers up his thoughts on his ex Chloe Mendoza's boyfriend Iann. 🦁🤡 Watch the video and/or read a full recap: https://t.co/2grBcA8XrR pic.twitter.com/cOlrfDdprB

QUESTION: Not a question but it was so messed up how that family treated u. I hope things r better.

MAX: Yeah well hey no ones perfect, I’m not gunna bash them, or be on their level. I’m past that. Just focused on my family’s future as well as myself. 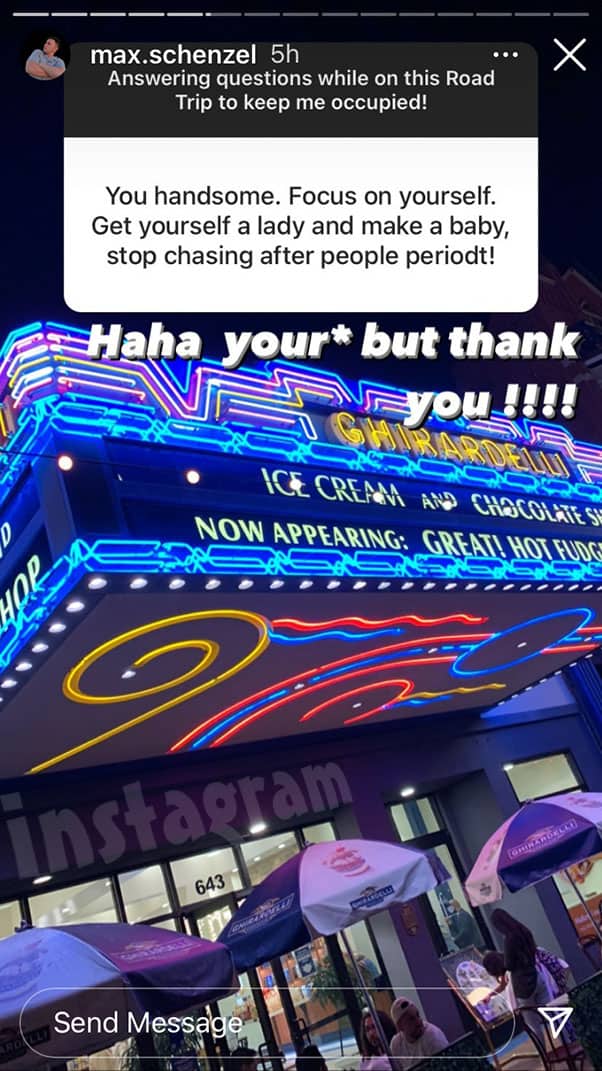 QUESTION: Your thoughts on what Chloe’s mom said on TLC page?

MAX: Time for me to be the bigger person once again and ignore her. I’ve done it plenty of times, it just sucks because it’s not good energy for Ava, and quite embarrassing.

QUESTION: Chloe says the restraining order is definitely not dropped?

MAX: Who’s that? But idk… Everything’s online. Go look for yourself, I’m not going to involve any of that on here, anyone has access to court records.

QUESTION: What’s the first thing you’re gonna do with Ava when you see her?

MAX: I’m going to ask her if she could do anything in the world what would it be? We’re gunna do that and then go to the next thing. Make sure I catch up on all the things she likes that I haven’t been around to learn and honestly just bond with her and let her feel how real my love for her is. Probably cry my eyes out with happiness once it really hits home …. Idk for sure when this will be but I’m excited.

As you will notice from Max’s last sentence, it appears that he is a little less confident about the actual timeline for when he will get to see Ava again. In his DM exchange he said it would be “next week probably.”

As far as Max’s claim that the information about the restraining order being dropped is available online, I decided to take him up on his challenge and go look for myself.

I’ve been following along with all of Max’s legal issues over the past few years, and I’ve never had much success getting information online about the restraining orders (aka orders of protection) filed against him. This time was no different. It could very well be that I don’t know where to look though.

Something that is easily accessible online is information about Max’s two domestic assault cases after altercations with Chloe in December of 2019 and February of 2020. They are still open with a hearing scheduled for both of them on August 31.

#Unexpected dad Max Schenzel reveals that the restraining order preventing him from seeing his ex Chloe or their daughter Ava has been renewed. Get all the details, including what Max did to allow for the renewal! #UnexpectedTLC https://t.co/DuNlCE1nwR

While doing my court research I ran across two other interesting cases. One was Chloe’s attempt to officially be adopted by her stepdad Nate, which she talked about earlier this year in a YouTube video. (Video included below.)

“I was trying to do an adult adoption,” Chloe said in the video, adding that she had hoped to have the adoption go through before Father’s Day. Chloe revealed that she waited until she turned 18 because otherwise she would have needed her biological dad’s permission, and she knew he would never sign off on it.

Unfortunately for Chloe, she ran into a snag due to her restraining order against Max. “I was made aware that because I have a daughter I needed permission from her dad in order for me to change my name,” she said.

More from Chloe on the adoption:

I did make the courts aware that I have a restraining order on him and what they were asking me to do was illegal because in my order it does say that any contact at all, even through a third party, is against the law.

I didn’t want it to come back on me, first of all, and I knew…that [Max] would probably say “no.” This was right after all his videos were made about me, so I knew he would say no and I also just didn’t want to give him that control over me.

I talked to my dad about this, too. After I told him he was very understanding. He doesn’t want me to get in trouble or have anything come back on me.

The other court case I ran across was a civil lawsuit against Max’s dad, Todd Schenzel. In case you were unaware, Todd has several criminal convictions for charges like auto theft, forgery, and issuing bad checks.

This civil suit was filed against Todd in December of last year. The documents aren’t available online, and given that it is the weekend, I wasn’t able to get those before publishing this post. However, the lawyer representing the plaintiff includes real estate law and evictions on his short list of specialties.

#Unexpected dad Max Schenzel isn't the only one in his family with legal problems! Get the scoop on Max's dad Todd, who has spent some time behind bars for charges including forgery and theft: https://t.co/NK0xQnSgmj

I will give Max credit in that he has managed to avoid any arrests or additional criminal charges for the longest time period since his Unexpected debut. He’s also been pretty good recently about not bashing Chloe, Jessica, or anyone else close to Chloe online. My guess is that if he is able to keep that up for a few more months he will be able to see Ava during the holidays. That is purely speculation on my part! Stay tuned to see if Max can stay on the straight and narrow and if my prediction comes true.