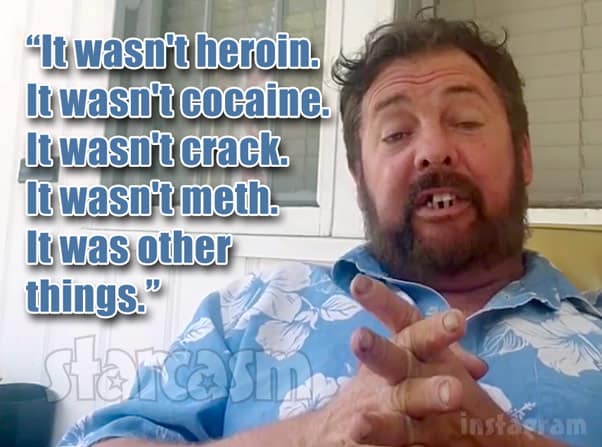 Love After Lockup: Life After Lockup star Scott Davey admitted to Lizzie in last week’s episode that he had recently been “on and off” drugs. Scott didn’t specify what kind of drugs, however, and many viewers were openly speculating on social media soon after the emotional scene aired. Scott responded with a video posted on Instagram with some clarification. He also revealed that Lizzie allegedly sent him legal documents demanding half of his WE tv money!

“I have a problem,” Scott admitted to Lizzie on screen, after she asked him to take a drug test. “I keep going on and off it. I’m scared.” He told Lizzie that he was not on drugs “the whole time” after her release from prison as he repeated that he goes “on and off.”

“I know, but you’re still doing it!” Lizzie replied. “And that explains so much.

“This is bad,” Scott admitted. “I can’t go on like this.” Scott then begged Lizzie to help him get sober, but she reminded him that she cannot be around someone who uses drugs because she’s still on parole and could go back to prison. She suggested that he get treatment, otherwise things were just going to get “worse and worse and worse.”

As we reported, Scott was arrested for meth in 2001, and he admitted to his past drug problems in a voice over on the episode. “Years ago, I did some amphetamine, you know? And I did some heroin, I’m not gonna lie. But me and Lizzie broke up — it was hard. And I knew as soon as that stuff got around me…there was going to be problems.”

After the episode aired, Scott posted, and then deleted, a video clarifying some things about his recent drug use. He never actually states what drug(s) he has been “on and off” of, but he does provide of list of drugs that he says he has not been taking. Here is the video, followed by a full transcript:

Scott is still mad from r/loveafterlockup

OK, a lot of people have been asking me after Friday’s show — um, look, no it wasn’t meth, it wasn’t cocaine, it wasn’t heroin. I was messing up though. I took care of that problem. Now, someway she’s saying that I abused her by throwing a letter at her. That’s a story from a woman who slaps me on camera. Maybe tomorrow I’ll go in a little deeper with someone called [Kris with a “K” (?)] and she’s gonna love that one! For what she really did to me! But no, I’m cool. It wasn’t heroin. It wasn’t cocaine. It wasn’t crack. It wasn’t meth. It was other things. So, there we go.

I’m going to go to the beach, hang out with my dog, meet a couple people out there, and have a little fun! And I’m done, and I suck at this.

In addition to the drug use clip, Scott also posted another video from the same spot claiming that Lizzie sent him papers demanding that he pay her half of the money that he was paid for doing Love After Lockup! He adds that the amount was $7,000. Here’s the clip:

Scott is upset today from r/loveafterlockup

Scott also shared a cropped photo of the document itself, which looks to have been kept in his pocket: 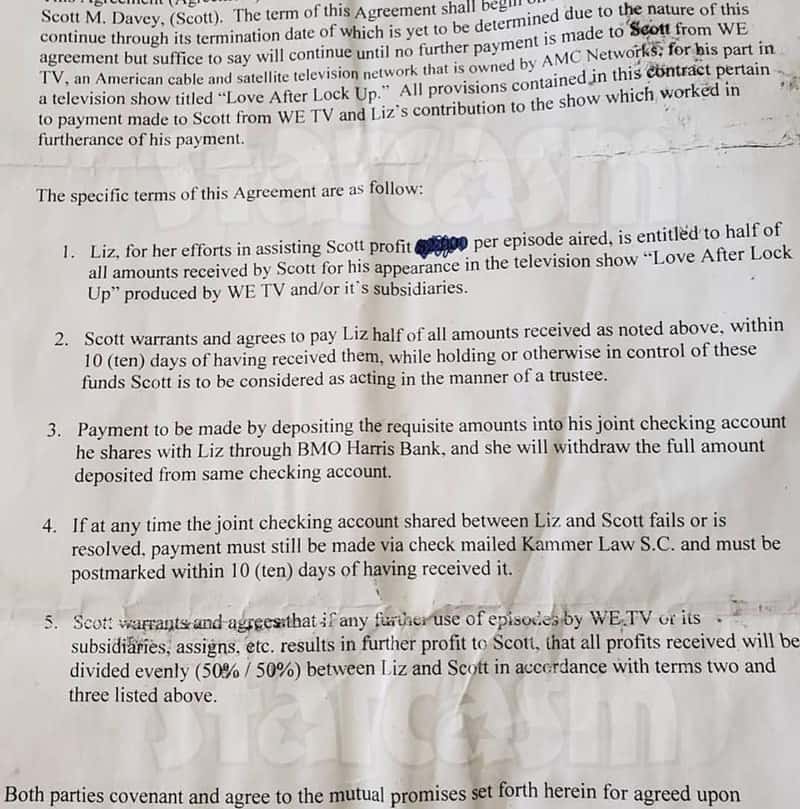 You will notice that the amount Scott allegedly made per episode has been scratched out with a blue pen, but it clearly states $2,000. We got a copy of a contract for one of the non-convict cast members of Love After Lockup Season 1, and it stated that the cast member was to be paid $2,000 per episode. Although we were not able to confirm it 100%, we did have multiple sources tell us that the ex-convict cast members did not get paid. All of that seems to line up with the document above.

So, if Lizzie never received any money for her first season(s) of Love After Lockup, then she legitimately has a beef against Scott! I don’t know if she has a legal right to half of his income, but I think most people would agree that she does deserve half.

We were also shown pay stubs for an ex-convict cast member of Love After Lockup: Life After Lockup, so obviously at least one of the ex cons got paid directly for the spin-off series. It should also be noted that the amount was $3,000 per episode, which is a significant pay raise, especially if all of the cast members are getting paid instead of just half! (Or 2/3 in the case of Sarah, Michael, and Megan?)

Scott has since deleted his videos and the photo of the document, and I do not believe Lizzie has responded to either on social media. We will keep our eyes on the situation and will update if there are any further major developments!

Meanwhile, be sure to tune in to the Love After Lockup: Life After Lockup season finale airing this Friday at 9/8c on WE tv! It looks to be a real doozy! Here’s the description:

It’s still unclear what Michael’s “bombshell” or Megan’s “shocking secret” are, but hopefully they will be less disappointing than Megan’s previous “HUGE surprise,” which was just that she kissed Michael’s pal while Michael was locked up.

It’s also unclear if it will be revealed on the show that “Tracie and Clint’s wild Vegas wedding” isn’t just them renewing their vows, but their actual wedding. As we exclusively revealed, they were apparently not officially wed during their saloon wedding in Houston, and they made it official almost exactly a year later in Las Vegas:

LOVE AFTER LOCKUP Caitlin still married to 2nd husband, he didn’t know about the show, plus Matt spoiler!