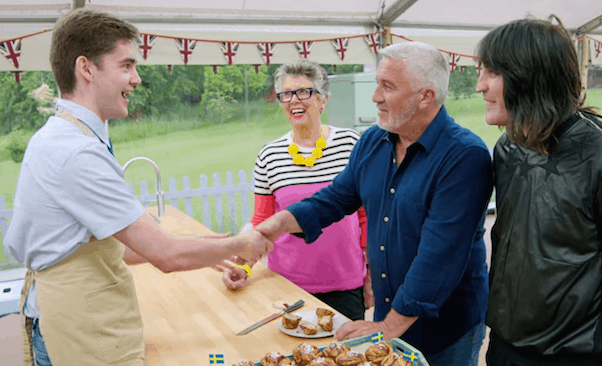 Over the last few series of The Great British Baking Show, Paul Hollywood’s propensity for handshake praise appears to have increased dramatically. A handshake from the longest-tenured judge is meant to be the absolute highest praise for a single bake.

But the eagerness with which Paul has started pumping hands inspired a fair bit of viewers who say Paul is watering himself down. So, exactly how many handshakes has Paul given on The Great British Baking Show? When did the Hollywood Handshake start? And is Paul really still shaking hands at a furious clip?

How many handshakes has Paul given on The Great British Baking Show?

It may surprise you to learn that the total number of Hollywood Handshakes given out so far is 37. The Great British Baking Show has been on for eleven series, so that’s an average of just 3.36 handshakes per year.

Even when you consider that Paul didn’t give his first handshake until Series Three, that’s still only 4.1 Hollywood Handshakes per year. And Paul and Prue judge approximately 225 bakes per season.

By that metric, it remains an extremely rare occurrence.

But Paul started giving out handshakes a lot more frequently after TGBBS moved from the BBC to ITV following Series Seven. The Eighth and Ninth Series had the highest number of handshakes — by far — of any that have aired so far. (The season-by-season handshake specifics are coming a little bit later in the article.)

Buzzfeed’s famous 2018 article on Paul’s handshakes began by asking whether Paul was being too free with his praise.

Paul himself even acknowledged that he needed to pull back on his overshaking ways. During a 2018 appearance on The Jonathan Ross Show, Paul addressed the controversy.

“The handshake came from when they looked very professional, and they almost cross that line from being amateur to professional,” Paul said. “What I’ve done is I’ve realized [the contestants] are all moving up in standard, so I’ve got to move my barrier up. So that’s exactly what I do — I raise the bar and then no one gets over the top of it.”

The first two seasons of The Great British Baking Show featured no handshakes at all. It wasn’t until the seventh episode of Series Three — Sweet Dough Week — that Paul gave his very first handshake.

The lucky recipient of the first Hollywood Handshake was Ryan Chong, for his Lardy Buns. 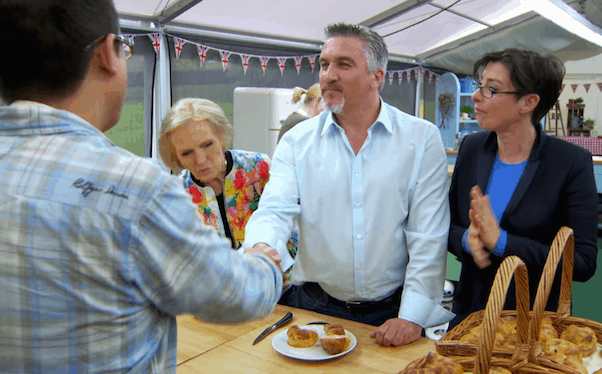 But this almost doesn’t count as a proper Hollywood Handshake. If you watch the scene now, what’s striking is that no one seems to make a big deal out of it.

Ryan barely moves. Neither Sue nor Mel gasp. None of the other contestants exchange shocked looks. And no one applauds. 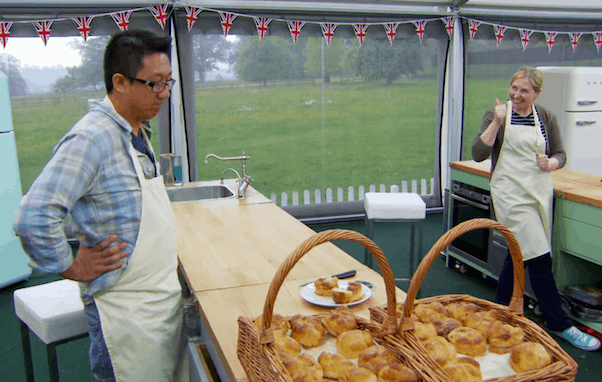 But at the time, there was no mystique around the handshake. It was just…a handshake. Job well done, for sure — and nothing more than that.

Before give a rundown of each one of the Hollywood Handshakes, here’s a quick list of the total number Paul has given each year. 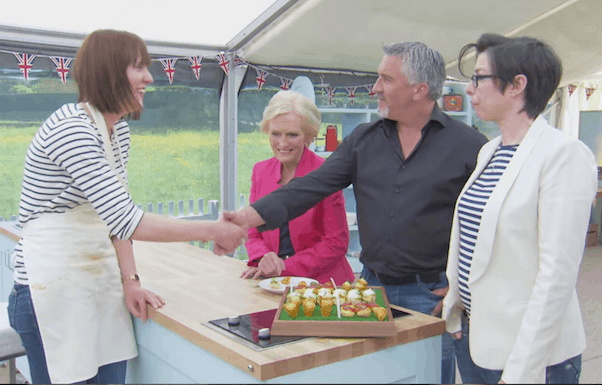 Again, though, it’s not quite a Hollywood Handshake. Frances seems very happy, but no one else *reacts* in the way that we’ve come to expect.

Series Five’s two handshakes both came early in the season. Norman Calder earned the first, for his Farthing Biscuits during Biscuit Week. 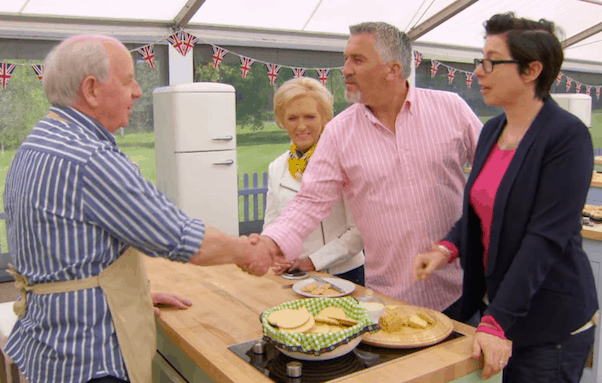 And the dearly departed Luis Troyano, who made it all the way to the final, won the second. Luis got a handshake for his Opposites Attract Bread during Bread Week. 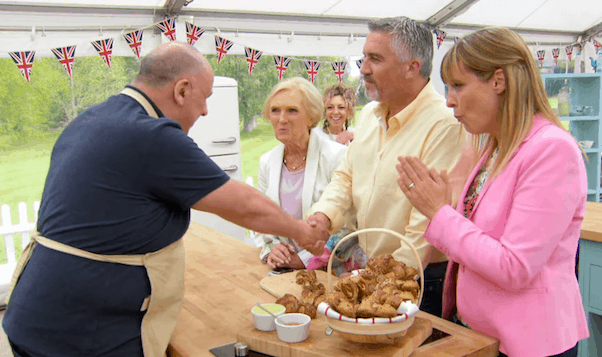 “Very clever,” Paul told Luis, upon initial inspection of his bread. “Very clever. And it is baked very, very well — I can see that.”

After taking a bite, Paul’s praise only intensified: “Pure alchemy. I was thinking too many flavors, but, do you know what?” (Handshake.) “Well done, mate. Well done.”

The first handshake of Series Six was also the first one to get something of a proper Hollywood reception. Paul had a handshake for Paul Jagger and his Bread Week contribution of Cranberry & Orange Sweet Soda Bread.

“That’s excellent,” Paul told him. “The orange comes through; your texture’s good; the bake’s pretty much perfect. For a sweet soda bread…yeah, I’ll have another piece of that.”

Then, after granting a handshake, it was Mel who said, “Oh, the handshake.”

Mel repeated her reverent words after Tamal Ray got a handshake for his Middle Eastern Game Pie during Victorian Week.

And eventual winner Nadiya Hussain was the first Great British Baking Show contestant to freak out a little bit about it. After Nadiya got a handshake for her Peanut Salted Caramel and Chocolate Tart in Chocolate Week semifinal, she whisper-shouted, “Handshake! I got a handshake!”

Next, eventual winner Candice Brown got the first-ever handshake during a Baking Show final. 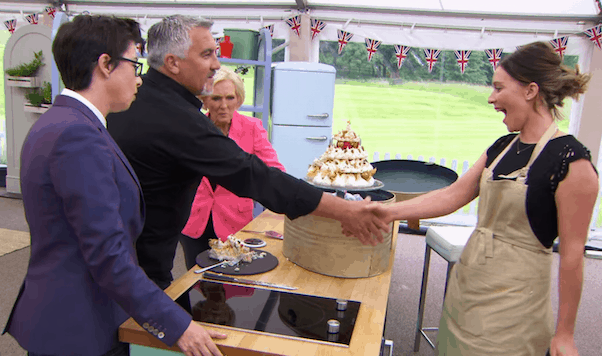 The handshake Candice got for her Queen Victoria’s Mango and Strawberry Crown Cake marked another first. It was the debut on-screen use of the term “Hollywood Handshake” (so dubbed by Sue).

Then, just a minute later, Jane Beedle got the second-ever Hollywood Handshake during a final, for her Red White and Blue Meringue Crown. 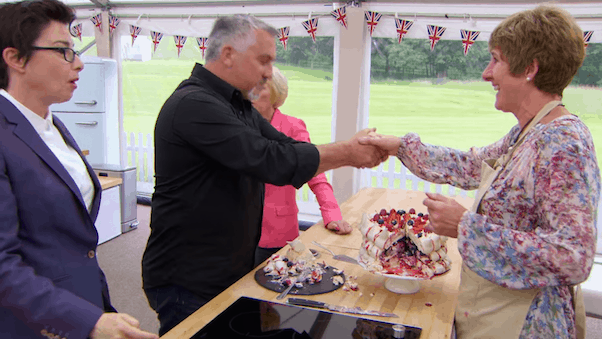 After taking three huge bites of Jane’s cake, and smiling wider each time, Paul could only tell her, “Thank you. Three layers of heaven. It’s beautiful.”

Series Eight is where things start to get really crowded. There were seven handshakes that year, and we’re going to resort to list form to give them to you.

One item of note: Series Seven’s Pudding Week was the first time there were three Hollywood Handshakes in a single week. It’s since happened twice more, both times during…

…Series Nine! This is where — if you’re an old-schooler — the Hollywood Handshakes really got out of control. Paul’s twelve handshakes this year are by far the most he’s ever given in a single series.

Several items of note here. First off, Dan is to date the only TGBBS contestant to get a handshake three episodes in a row.

In addition, Dan and Rahul, who got three handshakes each during Series Nine, are the contestants with the most handshakes in Great British Baking Show history.

Rahul’s Pastry Week handshake was particularly high-powered, as it was technically the show’s only double handshake. Paul was too busy enjoying Rahul’s bake to say anything at first — so co-host Prue Leith took it upon herself to start heaping the praise. 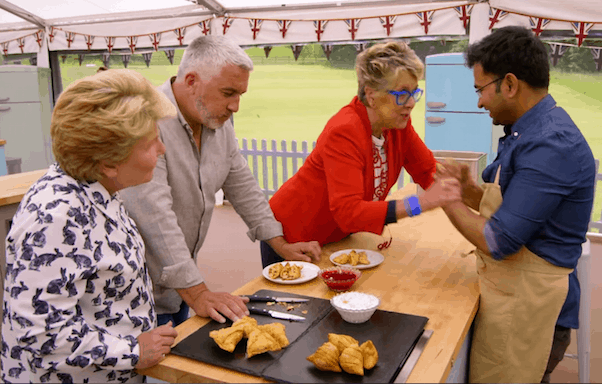 Prue reached across the island, took Rahul by both hands, and told him, “If [Paul] doesn’t put his hand out, and give you a handshake, I’m going to kill him.”

Finally, Kim-Joy’s Vegan Week handshake almost came with an asterisk. Paul really did not want to give this handshake, and even took his hand back before extending it again. 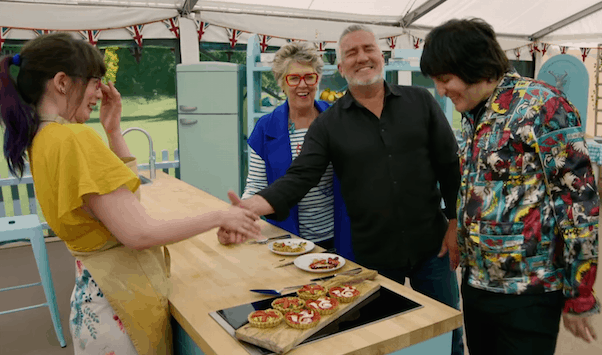 This was partly because it was Vegan Week, an occasion Paul had been dreading. We’re guessing it was also partly because by this point, Paul had already admitted he was being a bit free with his handshakes.

Next up was David Atherton, whose Fancy Custards during Roaring 20s week Paul called “a perfect custard pie.” After that came Steph Blackwell, for her Zest and Spice Hot Cross Buns during Festival Week.

And the fourth and final *and* most infamous handshake of the season belonged to Henry Bird, for his Chocolate Kardemummabullar (also during Festival Week). Henry, who had clearly not been expecting much, was so shocked when Paul reached his hand across that he said, “No. Shut up.”

Before the Eleventh Series, there had been widespread speculation that Paul would temporarily discontinue his handshakes. The theory was that stringent hygiene protocols stemming from the coronavirus pandemic meant Paul needed to swear off handshakes until Series Twelve.

However, the entire cast and crew of The Great British Baking Show went into strict quarantine to produce its 2020 episodes. And as of this writing, there have been three Hollywood Handshakes so far this year.

The first was for Lottie Bedlow, whose Quaranting Florentines dominated Biscuit Week. “I can’t find a fault with them, really,” Paul told her, literally turning her cookies over and back to try and spot some. 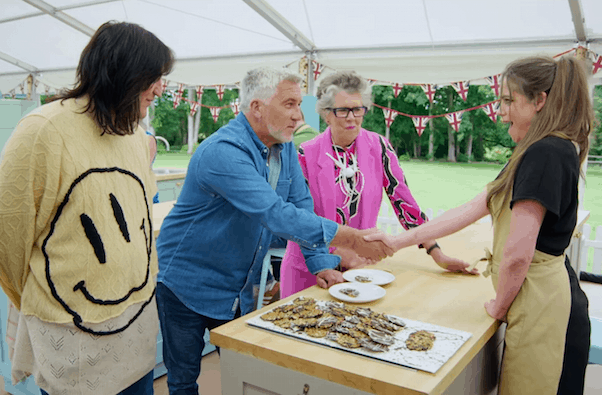 Next, Hermine got a handshake for her My Favourite Flavors Soda Bread during Bread Week.

And the most recent Paul Hollywood Handshake so far was for Peter Sawkins and his Thai Curry and Salmon Quiches during 80s Week.

The Great British Baking Show airs Tuesday evenings on ITV in Britain and Fridays on Netflix for the rest of the world.