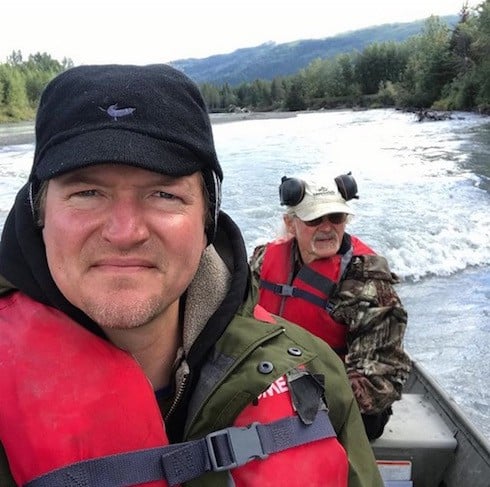 Atz Lee Kilcher may have recovered from his horrifying hiking accident, but the Alaska: The Last Frontier star isn’t quite ready to put it all behind him. Atz is suing Otter Cove Resort, on whose land his accident took place, claiming that negligence on its part led to his fall and twenty-plus broken bones.

The Blast was the first to report on the Atz Lee Kilcher lawsuit, which seeks $100,000 in damages for the 2015 fall that led to Atz’s medical evacuation and yearlong rehabilitation. According to their article, Atz is claiming that the spot where he went over the cliff’s edge is “inadequate[ly] guarded,” that no signage “warned of sudden precipitous edge of the land/drop,” and that Otter Cove “failed to adequately warn of and/or provide measures to prevent guest and other individuals…from falling over the precipice at the resort.”

Further emphasizing its point, the lawsuit further adds that the spot “is deceptive and dangerous.”

However, a recent Inquisitr report notes that Otter Cove “den[ies] any liability, responsibility, or negligence” for Atz Lee’s fall; they contend that his engagement in outdoor recreation on the resort’s property is not by itself cause for a lawsuit.

But how far did Atz Lee Kilcher fall in his hiking accident? Atz’s first update following the August 11, 2015 incident made no mention of its specifics–Atz was, understandably, focused on the long recovery ahead. And he made it a point to stay positive, as always:

Thankful to be alive and at home with my wonderful family. My broken bones are healing nicely considering how many I broke. Lungs are holding strong and every day I feel a little stronger. The temperature is dropping, leaves are falling to the ground and the busiest time of year is upon me, but I know my family has my back and before long I will be back amongst the walking. Work hard,dig deep and never give up.

A few months later, Atz offered a second update on his fall and recovery. Again, there was no mention of anything involving how far he’d fallen, but the Instagram post did contain a few photos of Atz’s X-rays:

Still hard to acknowledge how bad off I was. Broken ankle, hip,shoulder blade, arm,two punctured lungs and over a dozen broken ribs. My recovery is going slow but steady to me but the DRs say I'm recovering fast all considering.working hard with my physical therapist and looking forward to running and jumping from trees and mountain tops again someday. Thanks to my family for being by my side and thanks so much to all the people that have been keeping me in your thoughts and prayers. Patience is my friend.

Then, exactly one year after his accident, Atz offered the third (and, so far, final) injury update, complete with more X-ray images, and thanks for all the well-wishes his fans had sent:

A year ago today I was humbled by gravity, fear and friendship. It's been a hard recovery but I can't complain all considering. I still have my health, family and friends and that is a blessing for sure. Thanks everyone for your support and good wishes, things are different now of course but all in all I am well. #lifegoeson

News reports in the wake of the incident didn’t note the precise distance that Atz fell–but they did continue to state that he was on Otter Cove Resort’s land, and apparently not within the boundaries of neighboring Kachemak Bay State Park. It’s also unclear if Atz fell from a precipice, or the side of one of the Bay’s many mountains–or whether he landed near the base of a mountain.

Still, thanks to Otter Cove’s hiking guide and elevation notes, we can gather something of a sense of how far Atz Lee fell in the accident. The resort’s most challenging hike appears to be 4.5 mile Sadie Knob Trail (it winds into the State Park, but has access from Otter Cove), which features an overall gain of 2,100 feet, along with “superb and expansive 360 degree views of Kachemak Bay, Sadie Peak, Sadie Cove, Eldred Passage and Cook Inlet volcanoes.”

Given how experienced a hiker Atz Lee is, it seems unlikely that he was on one of the resort’s less challenging trails. And the only more challenging hike–the 8.2 mile Grace Ridge Trail, which features a 3,145-foot summit–requires a water taxi across the bay to the State Park. Presumably, then, you’d have to leave the Otter Cove Resort to get to it–meaning it couldn’t have been where Atz was hiking when he fell.