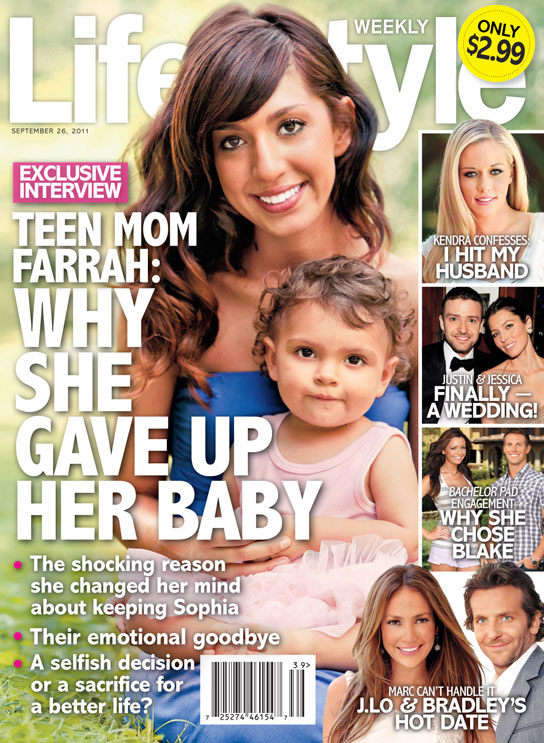 UPDATE – We do have some information that clarifies where all these conflicting stories are coming from though! Turns out there’s some truth to all of it (and some nontruths, especially when it came to marketing this story.)

Just yesterday in my recap of the Teen Mom After Show I summarized Farrah Abraham’s position on how it would not be in her daughter Sophia’s best interest for her to stay behind while Farrah moved to Florida. It looks like the Teen Mom had a serious change of heart if reports in Life & Style and Hollybaby are accurate in which it’s implied that Farrah has in fact left Sophia in Iowa under the care and supervision of her mother, Debra Danielson. However, Farrah gave an interview with momfinds.com (published yesterday) that says she ultimately decided NOT to move to Florida without Sophia.

“Sophia is the No. 1 thing in my life. I’m just trying to be the best parent that I can. I take care of my responsibilities. I’m happy that I took the chance to move. I would never regret it.”

As we’ve previously reported, Farrah now lives in Florida and is pursuing a bachelor’s degree in culinary arts and has also been trying to vamp up a modeling career among various other side projects like a possible cooking show. The L&S report implies that Sophia has been under the care of Debra. She added:

“My mom is the best grandma. I want her to be there for Sophia when I need to take care of my responsibilities, my education, and earning an income for both of us.”

Her career is not her only focus she admits as she is attempting to recapture some of the freedom she lost as a teenager when she became pregnant.

“I’ve been trying to grow personally and emotionally. I’m very much taking time to get back to myself and enjoy my freedom.”

Here’s what she told momfinds.com about the situation:

Honestly, I wanted Sophia to move with me from the very beginning. When my mom came up with the idea of Sophia staying with her, it created drama as if I’d be doing the right thing by taking her or leaving her with my mom. People can judge either way.

It may well be that even thought Farrah didn’t move without Sophia, that she leaves her with Debra a lot, and THAT’s what she was talking about in the quotes from L&S.

She stated that when she leaves Sophia she calls and calls, texts and emails to keep track of her. She doesn’t want her daughter to ever think, “Mommy’s not ever coming back.”

ED NOTE: This story initially ran with the Life & Style and Hollybaby report that Farrah did actually leave Sophia in Iowa, but our opinion about the veracity of this story changed when we reevaluated it and saw the momfinds.com interview. We did a new post with some updated information that supports the idea that Farrah did leave Sophia behind, and is currently living without her, but may have brought Sophia up in the interim. Currently, Farrah Abraham is living in Florida without Sophia, though she visits. There was initial skepticism about the Life & Style article, but it looks like it was telling the truth.