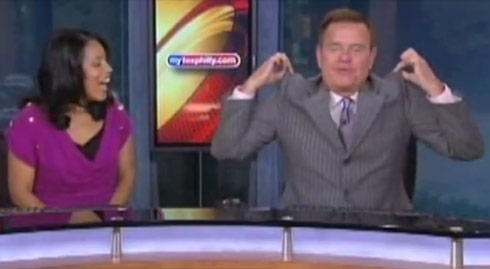 Two staples in the blogosphere for content are anything to do with the Kardashian sisters and news reporters caught on camera doing something funny when they thought the cameras weren’t rolling. Well in the following clip from Fox 29 out of Philadelphia we get a hilarious combination of the two!

Following a satellite interview on a morning show called Good Day in which Kim and Kourtney Kardashian were promoting their clothing line anchor Mike Jerrick took it upon himself to do an impersonation and in short order the video has gone viral already having received over a million views on YouTube. Check it out!

As soon as the interview is done Jerrick starts giggling and his co-host Shenielle Jones gives him a few raps on the arm to try and straighten him out. Our man then proceeds to lift his coat up emulating shoulder pads and mumbles in a high pitched voice after asking if they (Kim and Kourtney) can still hear him. At this point Jones joins in and the two have a good laugh before kicking it over to the weather.

As a post note Jerrick was informed that the sisters had watched the clip by TMZ and he stated that he did it to himself and that he has no filter. Jerrick added that he watched the Kardashians on TV all the time and he hopes it helped promote the Kardashian Collection.

VIDEO Who will be the new regional manager for The Office?