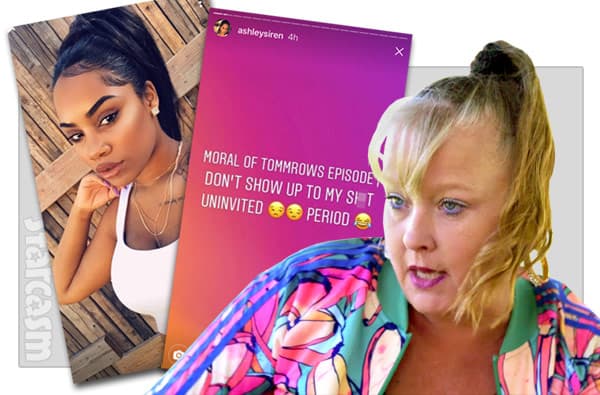 Monday night is the Season 1 finale of Teen Mom: Young and Pregnant, and viewers will FINALLY get to see the highly anticipated surprise birthday party for new dad Bariki “Bar” Smith. In case you missed it, Bar’s mom Shenandoah “Shen” Williams arrives at the party uninvited, and there is some sort of physical altercation as Ashley and her sister attempted to boot Shen from the party. After that, Shen announced she was done and quit the show!

Ashley later posted an apology video to Shen, but Shen was wary that it was insincere. Regardless, Shen did eventually agree to appear on the Reunion — albeit via remote.

Not long after the Reunion, the two fell out once again. Then, Ashley posted the infamous video in which she could be seen slapping herself before accusing Bar of beating her. After an enormous backlash to the video — due in large part to Shen re-posting the unedited deleted clip on social media — Ashley once again reached out to Shen with a video apology and the two seemed to bury the hatchet once and for all.

On Sunday, Ashley made a post smack talking about the birthday party to be featured on Monday night’s finale, and that caused Shen to BLOW UP! First, Shen took to Twitter and shared Ashley’s post, in addition to her irate response:

So this is respect and your apology sincere? u and your sister try and jump a 50 yr old grandmother and This is what u do? Fake I'm done all bets off but u won't fight my daughter? Lets be clear Ashley missed her sister got beat up Ashley is all mouth pic.twitter.com/PWtg1Fblvm

After the tweet, Shen did a marathon multi-part Facebook Live session in the Teen Mom Mama Drama group in which she trashed Ashley for no less than 45 minutes!

“No more apologies Ashley!” Shen exclaimed in her trademark raspy voice. “You’re a fraud. You’re a liar and I don’t trust you.” Shen says that she is sure Ashley’s apologies have all been for “damage control,” adding: “You apologize to get what you want, then you start all over again.”

Shen says that she called Bar about Ashley’s post and he turned to Ashley to ask her about it, which seemed to indicate that he didn’t know she had shared it. Bar then got off the phone to talk to Ashley about it. “He calls me back and says: ‘Well mom, the post is down.’ I don’t care that the post is down! It should have never went up!” Shen replied.

And no Teen Mom social media feud is complete without a few screen capped text messages:

Its always been about contra for Ashley she can shit on people but of they respond she takes the baby. I'm toxic cause u posted that shit boo i prove what I say. U don't want me interacting with the fans
U want me to lie to protect your lies no pic.twitter.com/so5x6ENguq

As I mentioned, Shen talked at great length in her Facebook live sessions, including responses to questions posed by members of the group. I’ve compiled some bullet points here for you:

• “Ashley worked at a club out here — she was stripping and she ended up in a hospital. She told my son that the owner of the club — she asked for cold medicine and the woman drugged her…She popped too many Xanax that night, that was the problem.” Shen is quick to point out that she has nothing against strippers. “I don’t knock her hustle. I don’t knock anybody’s hustle! You do what you gotta do.”

• Speaking of doing what you gotta do, Shen confesses that she sold drugs at one point. It was soon after she was forced to leave her home due to a domestic violence situation.

• Shen mentions Ashley’s mom Pastor Tea repeatedly, but always as “Tea Bag.” That’s not that important, I guess, but lord help me if I didn’t crack a smile every time! 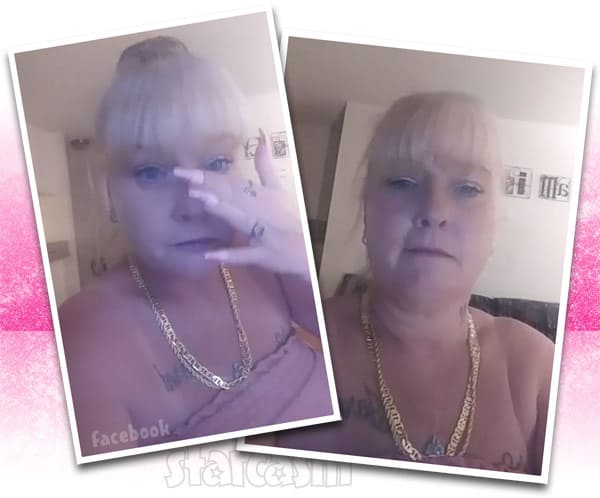 • Shen is asked whether or not there will be a Teen Mom: Young and Pregnant Season 2. “I don’t know if there’s going to be a Season 2, they haven’t told me yet.”

• Shen talked about Bar’s birthday party and admits right off that she wasn’t invited. “No one invited me to the party. My son called me and needed a ride to the party.” She said at another point: “I don’t want to party with little kids, but it shouldn’t have been a problem me walking in there saying ‘Happy birthday.'”

• Whenever Shen began talking about her strained relationship with her son, Bar, she would get emotional and teary eyed. The tears didn’t do much to slow down her anger train though as she kept the fire stoked and that engine chugging!

• Shen says Ashley was texting her during the live stream asking her to stop.

• Shen sent Bar to London to stay with a his godparents for a couple years “cause he was trying to be from the streets and he wasn’t and I wanted him to finish school.”

• Shen is asked about some of the other Teen Mom stars and she unleashed on a couple. She says that Jenelle ‘s husband David Eason “is a piece of sh*t” and she says that Briana DeJesus did break girl code when she started dating her Teen Mom 2 co-star Kailyn Lowry’s ex-husband Javi Marroquin. “I’m not going to sleep with my co-workers’ ex husbands,” she points out.

• Bar’s brother Troy Seales, who was recently convicted of murder, is “in good spirits.” She reveals that he is “reading and educating himself.” She says he has already learned how to write out a motion for a judge.

• Shen now knows what grapefruiting is.

UPDATE – Ashley has since responded on Twitter. “I’m not gone play with this devil today ? no ma’am,” she began, before playing just a little bit with that devil. “I don’t respect no one that was on my couch two days ago talking about a kumbaya but then gang gang on social media,” Ashley wrote in a separate tweet. “Could have picked up a phone. Period. End of discussion ?.” Something tells that isn’t the end of the discussion.

Bar responded as well, but only to indicate that he will not be respodning. “I don’t want nothing to do with anybody who keeps feeding into all this bullsh*t ✌?” he tweeted, adding: “that’s all I’m saying keep my name out y’all mouths please.”

You can see what ALL the fuss is about when the Teen Mom: Young and Pregnant Season 1 finale airs Monday night at 10/9c on MTV!