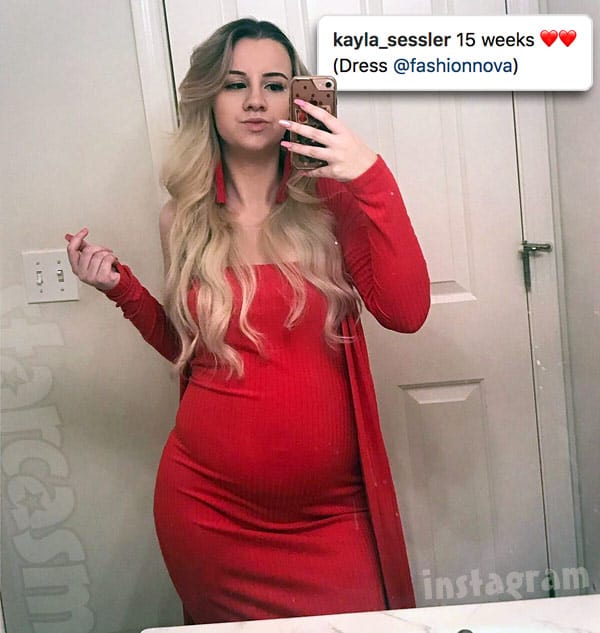 Teen Mom: Young and Pregnant star Kayla Sessler announced last month that she is pregnant with her second child, and the 20-year-old reality just shared a photo of her growing baby bump on Instagram.

“15 weeks,” Kayla captioned the mirror selfie above on Thursday, adding a couple of ❤️❤️ emoji. Kayla’s bump is quite sizable and quite easy to see in her tight red dress, which Kayla made sure to credit @fashionnova for.

The photo inspired A LOT of responses, which included numerous folks commenting on how large her belly is at just 15 weeks.

And speaking of ??, Kayla previously shared a couple of photos with her boyfriend (and dad-to-be) Luke Davis III from Valentine’s Day that were a bit on the racy side!

Had the best Valentine’s Day with my love ??

In case you missed it, Kayla enlisted the help of her one-year-old son Izaiah to make the pregnancy announcement last month. In the Instagram photo gallery announcement, Izaiah is sporting a t-shirt that has “only child” scratched out and replaced by “big brother.” In one of the images, he is holding a series of sonograms of his little brother to be.

Kayla and Luke made their relationship public back in September. Given that Kayla is reportedly due in August, that would mean that she conceived some time around her birthday back in November.

Kayla will reportedly be back for another season of Teen Mom: Young and Pregnant, so I assume we will all get to see her pregnancy journey play out on screen soon!