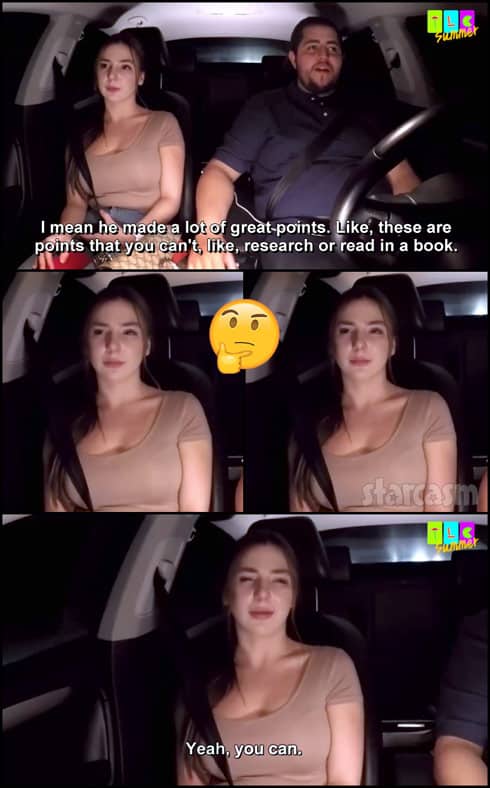 On the current season of 90 Day Fiance: Happily Ever After, Anfisa and Jorge Nava have agreed to attend couples therapy together in an attempt to salvage their relationship. In a preview clip for tonight’s episode we see both Jorge and Anfisa reflect on their therapy session — and it is pure, unscriptable Jorfisatrulescence!

First, we see Jorge and Anfisa riding in their car — presumably right after a therapy session. “I mean he made a lot of great points,” Jorge reflects. Anfisa concurs with a “yeah” before Jorge continues his thought process. “Like, these are points that you can’t, like, research or read in a book.”

The camera angle switches to just Anfisa and we see her face actually twitch and her brow scrunch as she ponders Jorge’s statement. “Yeah you can,” she points out. Jorge glances around confused.

* I feel I should point out that Anfisa has been doing quite a bit of reading lately, including numerous self help books.

The car scene shifts to a producer asking Jorge about therapy in an interview clip. “What do you think you learned from this session?” she asks.

“Before, I didn’t realize that it’s about,” Jorge begins before taking a long pause. “…changing myself, and also worrying about her feelings more.” Jorge looks at the producer for a moment with an “Is she buying this?” kind of look. “I don’t know. I’ve kinda forgotten,” he laughs.

The scene switches back to the car as Jorge and Anfisa continue their discussion about their recent session.

“I mean, what did you think about everything?” Jorge asks.

“I feel like we didn’t have enough time,” Anfisa says. “I mean, we talked about some issues, but I feel like [inaudible] more time.”

“I mean, I feel the same, but I don’t know — it’s just kind of hard when we don’t have anything going on,” Jorge observes. “I feel like, yeah, we’ve had our issues and stuff like that, but right now we’re not mad at each other.”

Anfisa’s voice comes in and it cuts to her interview. “It feels like Jorge didn’t even see me breaking down during the therapy. He thinks just because we weren’t arguing right now, that’s fine, you know? I’m fine, he’s fine. But, things are not fine.”

You can keep up with the rest of Jorge and Anfisa’s therapy sessions with new episodes of 90 Day Fiance: Happily Ever After airing Sunday nights at 8/7c on TLC.

90 Day Fiance Ashley explains Jay’s arrest, says ICE was going to detain him on Monday regardless