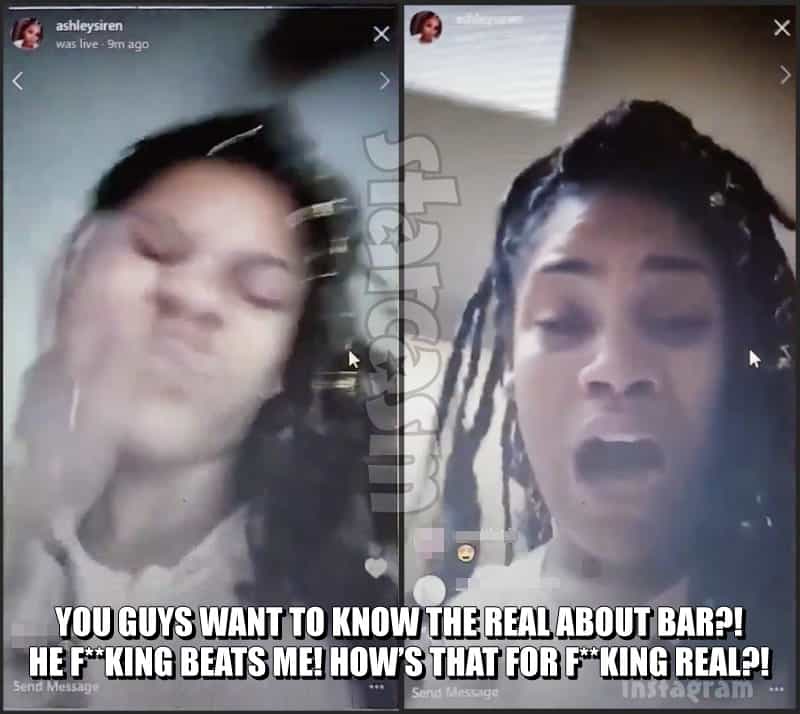 Teen Mom Young and Pregnant star Ashley Jones shocked her Instagram followers by posting a video in which she screams that her fiance Bariki Smith “beats my mother f**king ass.” But even more shocking than the allegation is that the first version of the video that she uploaded included a scene in the very beginning where she could be seen slapping herself before going on her rant and making the domestic violence claims!

Ashley then shows her laptop computer on the floor and she says it is “all broken the f**k up” before the clip above ends.

According to commenters, Ashley quickly realized her error and later reposted the clip with the beginning part showing her slapping herself edited out.

Bar’s mom Shenandoah, aka Shen, shared the clip numerous times on Twitter and Facebook and expressed her concerns for the safety of Bar and Ashley’s daughter Holly. Shen says that Bar’s sister went to get him, but that he elected to return to Ashley. “She drinks and takes Xanax,” Shen said of Ashley on Facebook. “I been in the middle of mess like this for 2 yrs smh I tried to tell people.” In a separate comment, Shen wrote: “She was high and drunk all night smh.”

Shen, who got into a huge Twitter altercation with Bar and Ashley earlier, tweeted: “Like I said she is nuts and a liar. She is hitting herself and claiming domestic violence. This is dangerous. She is dangerous.”

Meanhwhile, Ashley’s mother Pastor Tea reportedly drove to Ashley’s house after the video surfaced. Shen said on Facebook that the plan was for Pastor Tea to pick up Holly. Not wanting her Instagram followers left in the dark, Tea posted a video just after she arrived at Ashley’s house. She adjusted her hair for a good bit before thanking fans for making her aware of what was going on. “All I’m going to say is that I’m on the scene right now,” Tea says, as she seems to get emotional. “And I don’t really know what to tell y’all or what to say.” She tells viewers she will be back with an update.

Obviously, it is way too soon for there to be any official reaction from MTV or Viacom, but I’ve been doing this job a long time and I can pretty much guarantee this is the end of Ashley’s time on the network. I give it until late Monday afternoon for MTV to issue a statement saying as much, especially if this story blows up and winds up on TMZ, etc. — which is very likely. And this is not a situation where Ashley could claim it was some sort of hoax or anything, because that would be just as bad if not worse. Regardless of her fate with MTV, the situation is obviously a very concerning one in regards to the well being of Ashley and Bar’s daughter Holly.

We will continue to monitor the story and will update if there are any major developments.

UPDATE – Ashley has since responded to the video and says she “never once accused Bar of being the one to slap me:”

Slapping myself to come to realization what I can’t have a mental break down , never once accused Bar of being the one to slap me, couples fight . Is that it is

If you read this post then you know that Ashley is technically correct — she never said that Bar was the one who slapped her, only that “he f**king beats me!” “he puts his f**king hands on me” and “he beats my mother f**king ass.”

Ashley has also done yet another 180 in regards to her future mother-in-law Shen. “Said and did a lot of sh*t to my mother in law that wasn’t ok,” Ashley tweeted. “I love her and her son and want to move forward because my daughter deserves it.” One tweeter responded by asking if Ashley’s account had been hacked. “No, I have been immature,” Ashley’s Twitter account responded. “Working it out a better way.”

More from Ashley on Sunday in which she assures everyone she would not lie about domestic violence, which logically means that she was telling the truth when she stated that bar beats her — right? Here’s what Ashley tweeted:

Everyone needs to just shut the f**k up, sad part is you guys see a piece of a video and have so much to say but I WOULD NEVER lie about domestic violence. I love Bar, why would I tell the whole world lies about him ??

UPDATE – Ashley confirms that Bar “does get physical with me often” and she explains that slapping herself is just something she does to keep from losing it. She also apologizes at length to Shen, who accepts, albeit with caution. Meanwhile, Shen and Ashley’s mom Pastor Tea are now going at it! Click the link for all the latest.