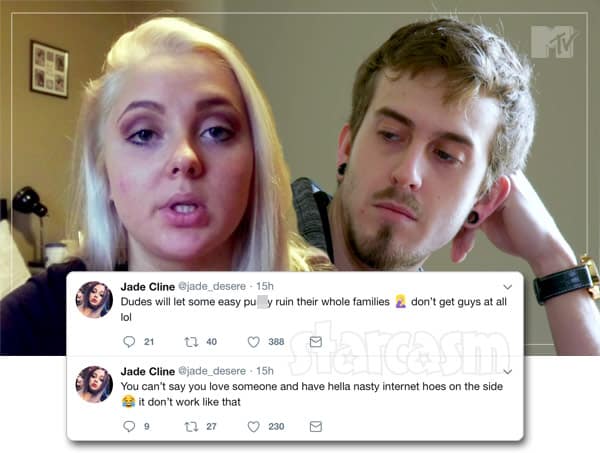 On this season of Teen Mom Young and Pregnant, fans have seen the tensions mount between new parents Jade Cline and Sean Austin as the young couple’s relationship appears to crumble under the pressures of parenthood. So are Jade and Sean still together? It appears that the answer to that question — as of this weekend — is a resounding “no.”

The straw that broke their relationships back apparently went down while Jade was in New York City to film the Total Request Live After Show last week. Although she was only gone a day, something must have happened during that time because she BLEW UP on Twitter once she returned, with numerous tweets and retweets about cheating.

The first signs that things were off came when Jade retweeted the following:

He could be w you for 5 years and do you dirty that whole 5 years meanwhile, y’all break up & he treats his new b!tch like a queen.. just how the cookie crumbles ??‍♀️

IDC if it seems cocky but I know 4a FACT that I’m NOT easily replaceable. A n*gga can go f**k with 1,000 b!tches prettier than me& still remember the way I held his ass down,& supported him when he was at his lowest b.c no b!tch is gonna hold down and be down for my man like I am

Jade later penned her own thoughts about infidelity, and concludes with an optimistic take on retaining her shine: 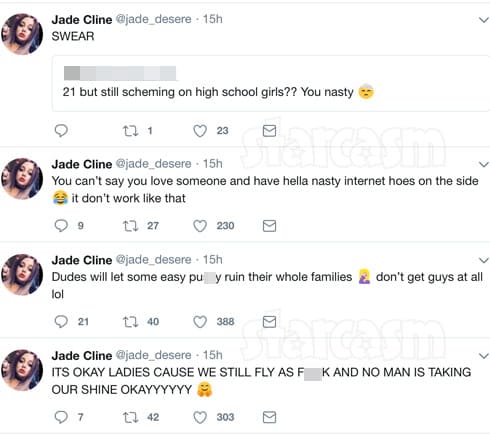 Earlier today there appeared to be no change in her current relationship status: “Yk what’s the best?” she asked her Twitter followers, before answering her own question: “Not needing a man for sh*t.”

Sean doesn’t have much of a social media presence, so I do not know his take on the apparent split.

UPDATE – Jade confirmed her split from Sean on the TRL After Show in which she showed the audience that she is no longer wearing her engagement ring and confirmed that the wedding is “off the table.” Here’s a clip:

“Do not settle.” #YoungAndPregnant’s @jade_desere is opening up on @TRL Late Night ? #TeenMom: After The Show starts right now on @MTV! pic.twitter.com/51DI23k1ug