MTV surprised everyone Monday by revealing they will be premiering a brand new Teen Mom series with all new moms titled Teen Mom: Young and Pregnant. For those of you super anxious to know more about the cast before the March 12 premiere, we spent WAY TOO MANY hours online gathering up lots of information, including full names of the moms and dads (or current boyfriends), baby names and birthdays, and social media links!

Without further ado, here is the Teen Mom: Young and Pregnant cast: 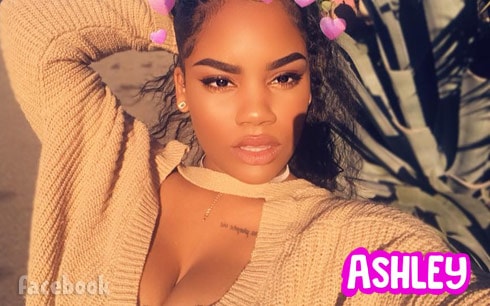 Ashley Jones
20 years old
From Antioch, California (near Oakland and San Francisco)
Ashley’s daughter is Holly
Holly was due on September 20 and was born on September 16 at 7:45PM
She weighed 7.10lbs and measured 21.3 inches

Holly’s dad is Bariki “Bar” Smith
Ashley and Bariki have dated for a number of years. 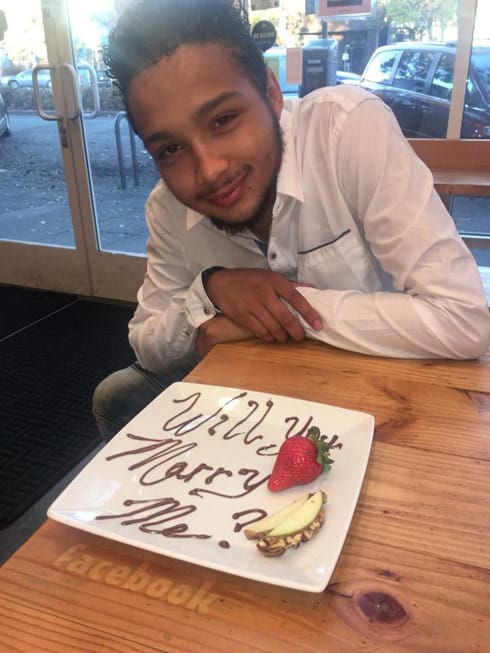 Ashley and Bariki are not just still together, they are engaged after he proposed in early November. (above)

Here is how Ashley recapped her 2017 on New Year’s Eve:

this year has been amazing . i gave birth to a wonderful healthy baby girl , i got engaged to my high school sweetheart , i just moved into my very own house , my bank account isn’t looking like the Sahara , and i got some stuff in the works that i cant even speak on. 2017 will be a year to remember but 2018 ………. boy its finna go down .

Ashley is a bit brash on social media, and kind of reminds me of Briana DeJesus in that regard. The two also share an opinion on plastic surgery it seems. “I want a few plastic surgery procedures done,” Ashley wrote in October, adding a “lol” and a “idgaf.”

UPDATE – Ashley apparently had multiple Instagram accounts and abandoned the one above. Here are her and Bar’s current Instagram and Twitter links as well as Bar’s mom Shen: 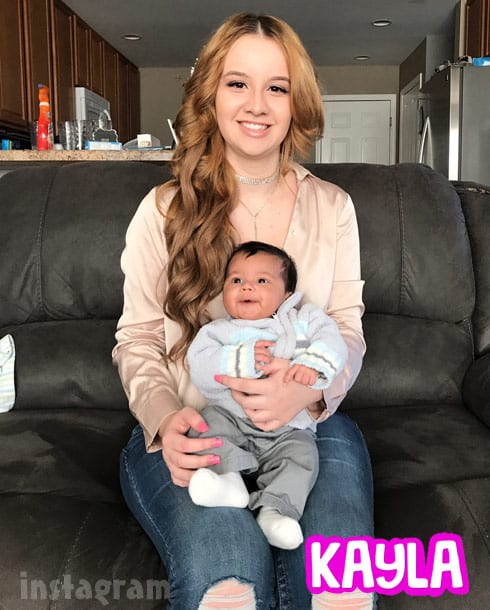 Kayla Sessler
18 years old
From Cortland, Illinois
Kayla’s son is Izaiah Cole
Izaiah was due on October 8 but I could not find his actual birth date
Izaiah’s dad is Stephan Alexander 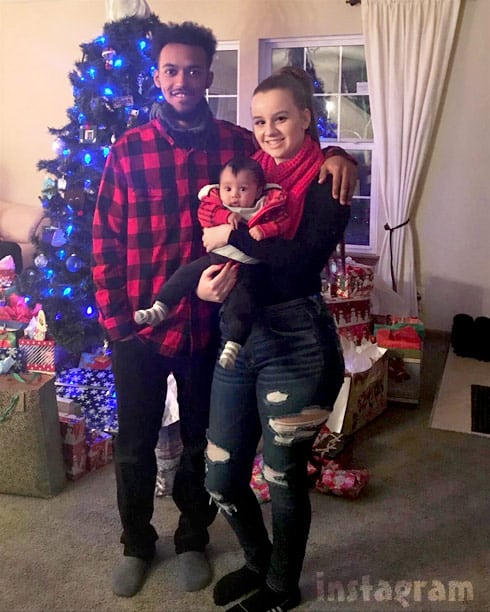 It’s unclear if Kayla and Stephan are still together, but they were at least civil enough to pose for Christmas photos together with their son (above). 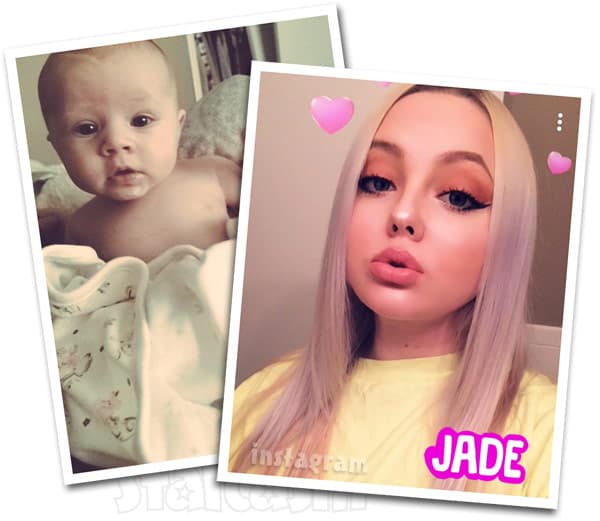 Kloie’s dad is Sean Austin
Sean is a music producer and a hip hop artist who goes by the name LiLFooT (Soundlcoud link)
Jade and Sean appear to still be together, but I’m not sure. UPDATE – Jade and Sean are most definitely not together any more as of May 21, 2018.

It appears that Sean’s family lives in California and that Jade might have lived out there at one time? From Jade in November: “So it’s official, me and my family are going on vacation to Cali in December ???? Can’t wait to meet sean’s family and see some of my friends ! ??” 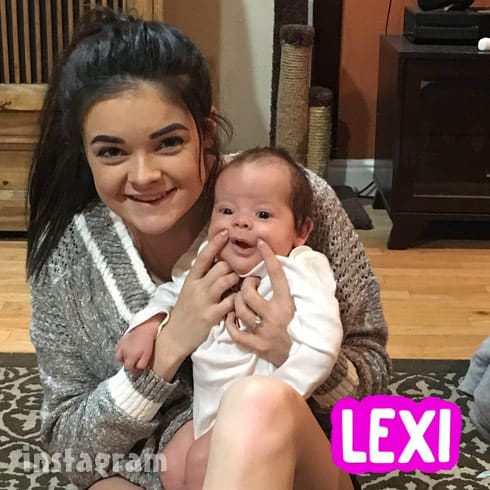 Lexi Tatman
17 years old
From Montrose, Colorado
Son’s name: Tobias
Lexi was due November 18 and looks to have given birth right around that time

The father of Lexi’s baby is her longtime boyfriend Kyler Lopez.
Lexi and Kyler have dated for years, with photos together dating back to at lest 2014. But, there are ZERO photos of Lexi and Kyler together over the last few months, and his name doesn’t even get mentioned by Lexi, so I am guessing they are not together. UPDATE – As featured on the show, Lexi and Kyler did get back together.

Lexi graduated high school, where she was a cheerleader (as you saw in the Teen Mom: Young and Pregnant trailer), in January 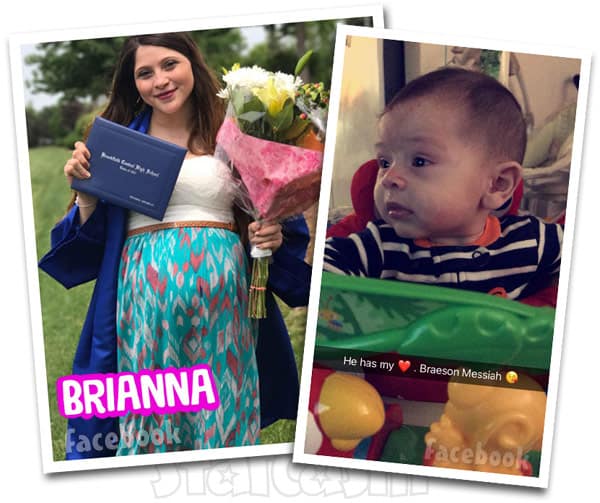 Brianna Jaramillo
17 years old
From near Milwaukee, Wisconsin
Son’s name is Braeson
Braeson was due on August 25 and looks to have been born a day or two after that

I do not know the identity of Braeson’s father, but that would make sense given what MTV said in Brianna’s bio: “Brianna and her transgender boyfriend Danae have always had a tumultuous relationship and during one breakup, Brianna hooked up with an old friend and got pregnant.” 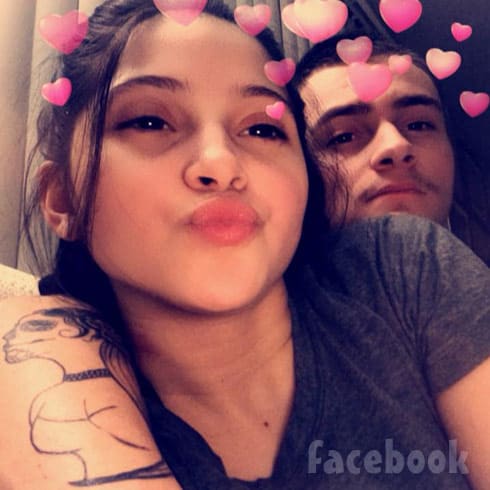 Brianna’s transgender boyfriend Danae doesn’t appear to be in the picture and has been replaced by a guy named Robert Reams (above).

Here is an interaction Brianna had with a friend after posting a photo with Robert on Facebook:

FRIEND: Is that your boyfriend?
BRIANNA: Yeah
FRIEND: What happened to the other one?
BRIANNA: just wasn’t happy. And he was always putting me down
BRIANNA: We broke up a while ago
FRIEND: That’s good the baby and you don’t need that love you guys.
BRIANNA: yeah that’s what I realized. And love you too! I hope you can meet him soon

OK, that’s everybody! You can find out everything else when Teen Mom: Young and Pregnant premieres Monday, March 12 at 10/9c on MTV!

* All you media peeps who find this information helpful, be sure to show us some link love! ?