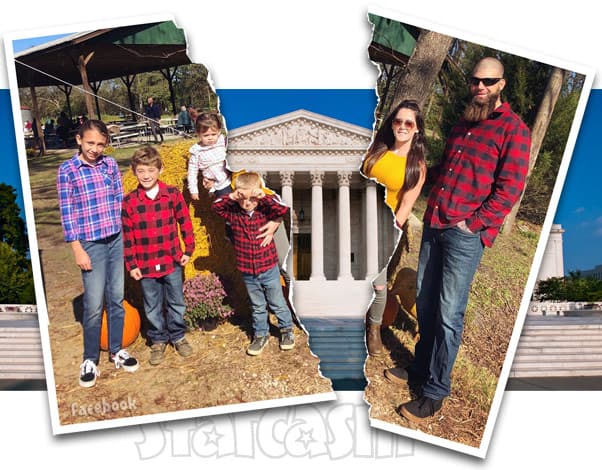 Former Teen Mom 2 stars Jenelle Eason and David Eason were in court in North Carolina earlier today in regards to the custody of three of their children: Ensley, Maryssa, and Kaiser. In case you missed it, a judge authorized CPS to remove all three children from the couple’s care after David brutally beat, then shot and killed, their French bulldog Nugget a little more than two weeks ago. The removal is only temporary as investigators assess whether or not David poses a danger to the children.

Today’s hearing was Jenelle and David’s attempt to regain custody of the three children immediately. (Jenelle’s mother Barbara has custody of Jace, so there was no removal necessary by CPS.)

TMZ sparked a lot of rumors when they reported early this afternoon that Jenelle and David were seen leaving the courthouse, adding that they “were in no mood to speak as they left.” The site added: “About 15 minutes before Jenelle and David left, several kids with blankets over their heads were placed in a CPS vehicle and driven away.”

The implication was that the hearing was over and David and Jenelle were not successful in their bid to regain custody of the children immediately. However, The Ashley’s Reality Roundup later clarified that the TMZ report was potentially misleading because everyone was merely leaving the courthouse for a break. The parties would later return for several more hours before eventually heading out around 5:20PM local time.

The Ashley reveals that the case has been continued until tomorrow, and her source on the scene says that “David looked angry and was throwing his hands around as he talked to Jenelle on the way to their car.” She also shared some photos from the courthouse in which you can see that David and Jenelle left without their children. Kaiser, Ensley and Maryssa will reportedly remain in the care of family members, at least until the hearing wraps up tomorrow.

If you are curious why a custody hearing would take more than one day, that is mainly due to each of the children’s cases being heard individually, and all of the parties involved. The Ashley reported Wednesday night that the list of people expected to be present at the hearing included David, Jenelle, Kaiser’s father Nathan Griffith, Jenelle’s mother Barbara Evans, and Maryssa’s mother Whitney Johnson. Plus, I really cannot imagine how long it would take to try to present to the judge a comprehensive list of the concerning things David Eason has said and done.

David has demonstrated more and more erratic behavior since he started dating Jenelle, but he also has issues from his past that include a rather lengthy criminal record as well as a previous protective order preventing him from seeing his son Kaden.

In addition to Child Protective Services representatives making their case, there will also be counter arguments and claims from Jenelle and David. (Which I hope is more than just Jenelle using her outside voice to declare to the judge: “You don’t really know David, he’s a great dad!” and “He’s sorry, even though this is all fake news!”)

The Ashley also shared an interesting update about Jenelle’s options — even before today’s hearing. “The Ashley’s sources inform her that Jenelle has been informed (at some point over the last few days) that CPS will allow her to have custody back of her kids, on the condition that she is no longer living with David (while the investigation is happening). Jenelle would have to move out of the home she shares with David, or David would have to leave in order for Jenelle to have the kids returned to her care.” That offer iterates the fact that all of this is about David and the potential risk he poses to the children. Jenelle herself is not under investigation.

It’s very hard for me to imagine a situation where if I were in David’s position — even if everything was blown out of proportion and not true — that I wouldn’t be willing to move out of my house so that my children could stay with their mother until this was resolved. Then again, this is the same guy that went way out of his way to insure that his wife could no longer work.

For all the latest updates on the Jenelle and David situation almost in real time, be sure to follow The Ashley on Twitter and Instagram. Also, send her some and words of encouragement for being so damned diligent and accurate with her reporting over the last few weeks!

I will wrap things up with our tweets from earlier today:

Might as well capitalize on the extra exposure right? #FlatTummyTea pic.twitter.com/lIbjSQTykq