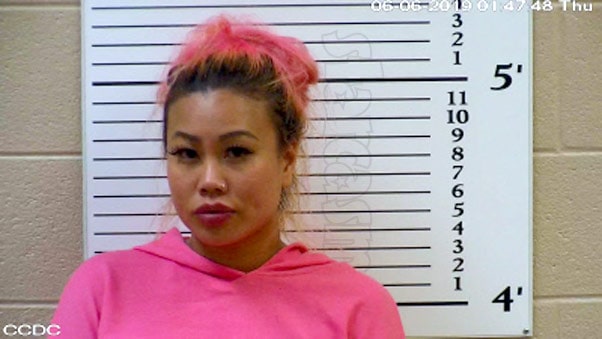 Love and Hip Hop: Atlanta Season 6 star Lovely Mimi (real name Myha Thi Luong) was arrested in North Carolina and charged with felony drug possession earlier this month after an incident at a local casino. Mimi had been quiet about her most recent arrest, but she addressed it at length in a new YouTube video posted on Monday.

To get you caught up to speed, Mimi was booked in Cherokee County, North Carolina at 1:24AM on June 6. The initial report stated that Mimi “allegedly dropped an unknown amount of ecstasy on the floor of Harrah’s Cherokee Valley River Casino, according to Cherokee tribal police.”

Mimi was officially charged with felony possession of a schedule 1 controlled substance. The charge is a Class I felony in North Carolina, which is punishable by 3-12 months in prison if convicted.

Here is Mimi’s YouTube video followed by a recap. Make sure you read to the end for an update on the reluctance of local authorities to release any additional information about her arrest!

“I woke up one morning and the blogs are writing that I have a felony charge and I’m banned from the Murphy, North Carolina casinos,” Mimi explains as she and her friends dig into an amazing spread of blue crab, crawfish and more. OK, what is true and what is not true?” she asks, before answering her own questions at length.

“I was sitting there and I was playing,” the reality star recalls. “I go to the bathroom. I come out of the bathroom and there’s like four or five po-pos around me…They said that they got me on video recording that I dropped something. Mind you — outside. They said that there was one pill dropped outside.”

When asked about the pill, Mimi told the officers that it wasn’t hers and she didn’t know what it was. “They claim to have video that I dropped it,” she says. “And they said that if I don’t tell them what it is, then they were going to detain me.”

Mimi asked what color the pill was and was informed that it was blue. “Well sir,” she replied, “it could be Viagra. It could be Alleve. I don’t know what it is. It’s not mine.”

Mimi mentions that they did a test on the pill, and I assume from the charge that the test(s) indicated it was ecstasy. 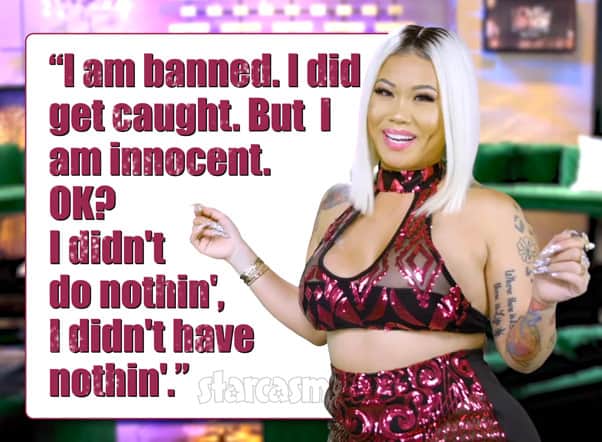 At this point in the clip, Mimi reveals that when she was stopped about the pill, she was on a winning streak. “I had learned to play Baccarat,” she says excitedly. “I had just hit the bonus dragon special for $750 off a $25 chip.”

Mimi says she was then detained, and the room they put her in was a little less than pleasant. “It was like The Hills Have Eyes. There were, like, people on meth licking windows. It was creepy!” she exclaims.

“So, they charged me with a felony,” Mimi continues. “My bail is $1,000.” Mimi adds that they searched her and her friend, but found nothing incriminating on their persons.

Because Cherokee is an Indian base, so you know, Indians own the land, they are able to come up with whatever rules they want. They’re allowed to do what they want. This is their property, this is their land. You can’t even be the F.B.I. and step on their ground without asking them.

They never got any, what do you call that? Statements from me. So, I’m pretty sure — I have court on June 27 and it should be thrown out because you don’t have no proof, you don’t have no evidence. You didn’t even get a statement from me. You gave me a felony with no bond.

So therefore, I could sue y’all for, what is that? Something, something about — not even harassment, but make me look bad? What is that called? Something about my public image, tarnishing my name? Yeah, something like that, because now you got all the blogs…all these people — and the way they’re saying it is: Oh I got caught with a whole bag — dropped a whole bag outside. Like I’m some type of drug dealer trying to make a move. It’s like, I was minding my business, and I was just gambling. So, for real for real, I could technically sue y’all for that.

Mimi later said that the casino security was probably watching her and her friend because they looked different, and she cited her pink hair (as evidenced in her mug shot photo) and her “big ol butt.” Towards the end of the clip she says a little more about why authorities might have decided to press the issue: “I think it was because they pulled my criminal history and they were, like, ‘Oh man, she’s goin’ down.'”

“Pray for me,” Mimi tells her fans. “Hopefully everything will get dismissed on June 27.”

Since Mimi’s arrest, we haven’t been given much additional information at all by the local authorities — and it is not for a lack of trying. Trappalachia, who first broke the news that Lovely Mimi was arrested, is familiar with local law enforcement and has been trying to get more information for weeks to no avail.

Strangely, tribal police haven’t yet released anymore information about Luong’s case. Normally, the department shares the details of its arrests with the public within a matter of days. Many in Western North Carolina are now wondering how and why a felony narcotics possession charge netted her such a low bond amount.

Trappalachia shared another post earlier today and revealed that little has changed:

After repeated attempts by Trappalachia to obtain her arrest record, Cherokee Indian Police Department has not released any documents related to the incident.

Another fact is, and this is something that Trapp finds truly concerning — Cherokee Indian Police Department never released Luong’s arrest report, which is odd, isn’t it? One might be inclined to agree with her about the charge being bogus, under those circumstances. Officer Chekelelee, you have our number.

Hmmmm… It’s starting to sound like Lovely Mimi might be back in North Carolina playing Baccarat before the end of the month! 🤞