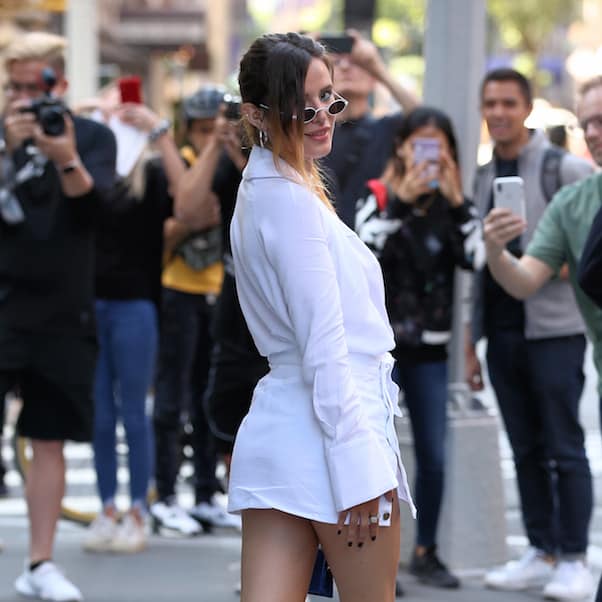 THE BLEMISH – After some idiot hacked her Twitter account and threatened to leak Bella Thorne’s nudes, Bella went ahead and released them herself. She also praised the idiot’s intelligence, calling him “obviously smart” as he was able to hack her stuff in the first place, and said she hoped he would become an ally instead of just another troll for the FBI to keep tabs on

JEZEBEL – HBO’s new show Euphoria has been getting a fair bit of attention for the attention it reportedly pays full frontal nudity. But the first dick in the premiere episode is a confirmed prosthetic

GO FUG YOURSELF – The 2019 MTV Movie Awards were last night; here’s your red carpet photo gallery. If you find someone half-assing it more than Noah Centineo, let us know in the comments

THE ASHLEY’S REALITY ROUNDUP – In other 2019 MTV Movie Awards news, the network is reportedly “furious” with The Challenge host Johnny Bananas, who was so pissed that his show lost the “Reality Royalty” award to Love & Hip Hop Atlanta that he stormed the stage and accepted the award anyway

VOX – “Taylor Swift’s ‘You Need to Calm Down’ wants to be a queer anthem. It also wants to sell you something: Her latest video is a complicated example of Pride Month’s commodification”

DLISTED – Gaten Matarazzo from Stranger Things is set to host a new Netflix show, the premise for which is he’s going to “hire” people struggling to find work for different jobs, only to reveal that the jobs were fake all along. This would be a terrible idea in the best of times; with the gig economy as perilous as it is and far more people closer to financial ruin than comfort, it’s a wonder the show ever got greenlit in the first place

CELEBITCHY – “So, Prince William had ‘one or two suppers’ with Rose Hanbury, huh?”

REALITY TEA – Real Housewives of Beverly Hills star Kyle Richards would be “OK” with having Brandi Glanville back on the show, especially since Lisa Vanderpump’s departure means there’s a huge high-profile hole in the cast

THE BLAST – Tiffany Haddish became the first celebrity to cancel Georgia since the state passed its controversial six-week abortion ban, axing a show she’d been scheduled to perform in Atlanta

LAINEY GOSSIP – “Barring Disney movies, the box office this summer (so far) has been kind of miserable…This was another dismal weekend, with every new movie under-performing, including Men in Black: International, which opened with $28 million, even less than yikes-bomb Dark Phoenix.”