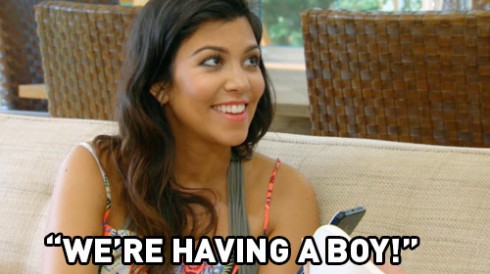 It will be another boy for Kourtney Kardashian and Scott Disick!

“Mason ran in here with the blue stick. There was a red star or a blue star,” Kourtney explained of the reveal, which was filmed by Kim Kardashian.

“I am so happy that we’re having a boy,” Kourtney said. “It’s going to be perfect for our family.”

However, Scott — who admitted he didn’t take the news of Kourt’s third pregnancy “the right way” — seemed slightly less enthused in the video. Mason was also upset by the news at first, until Aunt Khloe reminded him “girls don’t like aliens and Lego guys” and a younger brother would be easier to roughhouse.

With the baby boy due in a matter of weeks, expectant mother Kourtney made news last week for posing nude. She explained in the accompanying article, “I’m not embarrassed of my body. I’m at my best when I’m pregnant.”