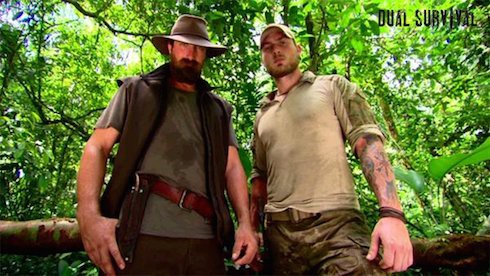 Dual Survival Season 8 has a premiere date–and we’ve got a whole lot more information about what to expect, including some things the show has never done before. Read on for a complete rundown of Dual Survival Season 8, including multiple new hosts, brand-new locations–and a military rivalry that threatens to bring everything crashing down.

As we first reported weeks ago, the newest season of Dual Survival will see new fan favorite Grady Powell make his triumphant return. Rather than pair him with just one person, though, the show’s producers opted to rotate in two very different survivalists. First among them is Bo McGlone, who stands to the left in the photo above. According to advance press materials, the drama between Bo and Grady is fueled by the first inter-military pairing in Dual Survival‘s history: Grady’s an Army man, and Bo is ex-Air Force:

A former special operations combat airman, Bo comes from a long line of military men. After his discharge from the Air Force, Bo served as a military intelligence security contractor in Iraq, Afghanistan and Africa in some of the harshest possible conditions. In the frigid snow-capped peaks of Wyoming and in the sweltering slopes of Colombia, Army and Air Force must set aside generational differences and entrenched military rivalries in order to tackle some of the toughest terrains imaginable.

Grady’s second partner couldn’t be much more different: Josh James, an “experienced outdoorsman from New Zealand’s South Island,” has lived off the grid for years, “hunting and fishing to provide for his family,” and advocates “a patient, balanced approach to survival that frequently clashes with [Grady’s] more impulsive tactics.” In other words, Josh sounds more like Cody Lundin than Joe Teti (though, if social media is any indication, he and Grady seem to get along much better in general than Grady and Bill did last season).

We also have Josh to thank for a few more Dual Survival Season 8 location spoilers. Expect he and Grady to spend some time in the mountains of Peru…

#dualsurvival on set A photo posted by Josh James Kiwi Bushman (@thekiwibushman) on May 9, 2016 at 2:21pm PDT

…and to make their way through the harsh Croatian topography:

Remnants of a war… Croatia

Deserted village. Serbs once lived in these houses after forcing the locals out. Now Croatian people refuse to live in them…. they now stand empty. Abandoned. A photo posted by Josh James Kiwi Bushman (@thekiwibushman) on Apr 15, 2016 at 3:54am PDT

Beyond that, we know from our last Dual Survival update that Josh and Grady did some filming in Bulgaria–you can check out those photos here. And, based on photos and captions both Josh and Grady shared approximately eight weeks ago, it looks like Dual Survival Season 8 will feature a Cambodian episode, as well.

Grady’s two new partners are only half of the new Dual Survival team, though. In addition to he, Josh, and Bo, the show is also adding a completely new set of hosts, in the form of EJ Snyder and Jeff Zausch–best known to Discovery viewers for their exploits on Naked And Afraid. According to advance materials, EJ and Jeff’s episodes involve “harsh obstacles in Moab, the Gulf Coast and Brazil’s Serro Do Mar mountain range.”

Probably the best thing about this Dual Survival Season 8 update? There’s hardly any time left before the new episodes start airing! Discovery just announced that Season 8 will begin exactly one week from today: on Wednesday, June 15th, at 9 PM.