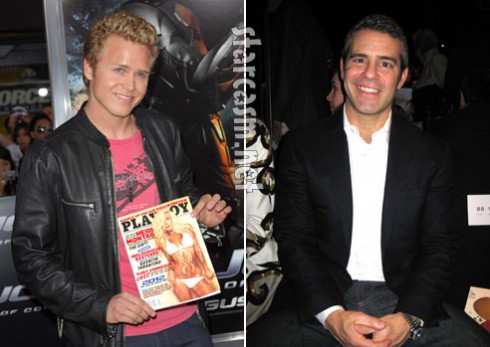 In a war-of-words between Andy Cohen and Spencer Pratt I would bet my house, life and just about anything else that I can think of that the Watch What Happens Live host would end up victorious.  Hell, just the idea of this even being called a war seems like a misappropriation of the term.  Let’s call it a Bravo beat down; a Speidi need to go hidey on that island they were lying about running off to.

Mr. Cohen got caught up in this mess, as we previously posted, when he commented on WWHL about a Tweet that Heidi Montag made about the possibility of becoming a Real Housewife of Beverly Hills.  Andy got randy when he stated that:

“Professionally, I’m not supposed to discuss any negotiations so I have to parse my words here. That trash is delusional and I would sooner stab my knives into my eyes than see her on this network.

“But good news! Heidi, you’re on my show tonight because you’re the ‘Jackhole of the Week!’”

For 99.9% of the human population this Cohen forehand to the face would’ve read loud and clear as a go away and leave us alone statement.  But, BUT, as Andy probably should have known when it comes to Speidi there is absolutely no reason or rhyme behind their seemingly endless and desperate attempts at fame-whoring.  In no way did Andy ask for this but none-the-less Heidi’s partner in “please notice me” Spencer Pratt has responded with his own harsh words and criticism.

In a statement to Radar Spencer “weird beard” Pratt rambled on with some poor attempts at a return of fire.  Here’s what he had to say:

“Andy is clearly the Jackhole.  You think you’re special because you have your little talk show that’s hurting in ratings doesn’t give you special authority to bash a young girl.  Maybe you have issues with women. From how I see you treat the women on all the series during your reunion shows, it’s clear you you don’t respect your talented housewives, always mocking them.”

“Most viewers of Bravo are women, and no woman wants to hear a man call another woman trash.  If he had such a problem with my wife, why didn’t he say something to our faces when we met his arrogant self in NYC.  He is not an individual, he represents a network and as much as I used to love watching shows on Bravo. After this, I will never watch a Bravo series because they choose hateful people as the face and spokesperson of the network.”

Although I’d love to hear what Andy thinks of this latest Speidi proclamation, I think he’d be best to ignore the poor little things until hopefully they go away.  A recent check on his Twitter feed looks like he’s doing just that.

For a video visual of what a Pratt vs. Cohen battle might look like I present to you the following clip.  In case there is any confusion Andy would be Mike Tyson and Spencer is Little Mac: