The bitter beaver battle between Bravo babes Brandi Glanville and Joanna Krupa continues more than three-and-a-half years after Brandi stated on Watch What Happens: Live! that Joanna cheated with Yolanda Hadid’s husband Mohamed Hadid, and that Mohamed said Joanna has a smelly vagina.

Brandi would later double down on her VaJoanna diss by drunkenly referencing a fish when asked about the situation by a TMZ photog soon after her WWHL appearance.

Here’s the Big Bang clip of Brandi on Watch What Happens: Live! when she made the cheating and odoriferous allegations against Joanna:

In January of 2015, Joanna Krupa officially filed a lawsui against Brandi, claiming that Brandi’s comments caused her emotional distress and damaged her reputation.

Brandi never backed down and never apologized, and essentially called Joanna’s bluff by requesting her gynecological records for the years 2000-2005, in addition to her Real Housewives of Miami contract (there are reports that the contract precludes suing another Real Housewives star), tax returns, and other financial records.

In January of this year, a Miami judge sided with Brandi and granted her discovery motion, requiring Joanna to hand over the medical records and all the other requested information. It’s been more than six months, and Joanna has yet to comply, so Brandi has just filed a motion to dismiss the lawsuit completely.

The motion caps off a frustrated week for Brandi, who was her usual unrestrained self on social media as she called out the American justice system for being jaded and corrupt: 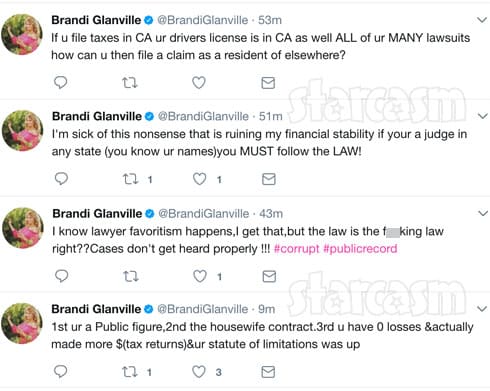 Exactly! So I'm asking you where is the law?I'm done with this almost 3 years and everything I've earned for judges not to follow the law!

1000 percent i'm almost 3 years in & all my savings I now work to pay my lawyer is bills! Please ask Miami judges like where are the law is

Thank u❤️U have cute baby's ❤️❤️Almost 3 years !Come on I have 2 boys to raise-Somebody needs to pull up @bravocontract & call it a day!

After a few days reflecting on her comments, Brandi regretted some of what she wrote:

It sounds like the case will boil down to Joanna either providing her medical and financial records or else dropping the lawsuit — I don’t know what the other option would be? Stay tuned!

UPDATE – Joanna Krupa has dropped the lawsuit! And even more amazingly, Brandi Glanville publicly apologized?! Click the link for deets.