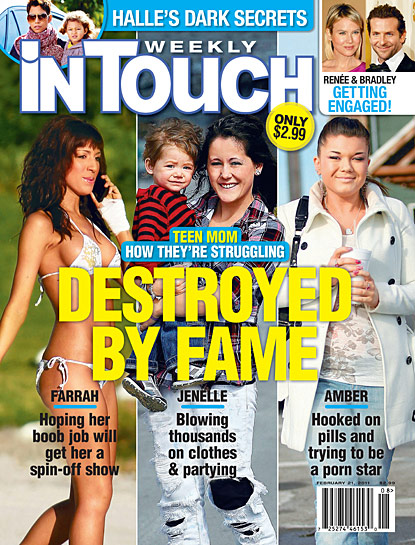 As you can tell from the above cover of In Touch Weekly‘s latest tabloid run, MTV’s Teen Moms are gaining in popularity, and as they do the headlines that run in these “publications” get more and more sensational. It isn’t just a coincidence that Bradley Cooper and Halle Berry are footnotes, these Teen Moms are a phenomenon!

Many of the Teen Moms have become long distance friends and hit each other up via Twitter, etc. In a recent exchange, Teen Mom’s Farrah Abraham and Teen Mom 2’s Chelsea Houska shared their feelings in regards to recent tabloid articles printed about them.

Here is what Farrah tweeted about the above copy of In Touch:

(I’m not sure if Chelsea is referring to that issue of In Touch, seeing as I haven’t had a reason to run by the grocery store today.)

Farrah had another comment in response to what Chelsea tweeted:

I don’t know about that one. These tabloids (and us bloggers) generally only give attention to what is already popular. Perhaps there are some things Farrah can blame the magazines for (Sensationalism, blatant inaccuracies, etc) but her fame and the attention are not one of them.

These girls all volunteered to be on a televised reality series and they are all being financially compensated for it, and part of being a television star (or most any kind of celebrity whether its a musician, movie star, athlete, etc) is media attention, for better or worse. You can’t have all the good things without the bad in this situation.

And here are two consecutive tweets along the same lines:

I realize that these girls receive A LOT of criticism and negative attention, which is hard when you’re a teenager trying to raise a child (or two), but this is what they signed up for, and they can always just walk away.

Of course I don’t think that’s what they should do (except perhaps Amber and Jenelle). I think these girls can be (and for the most part are) genuine role models for other people in similarly difficult situations. Tune in your fans and supporters and tune out the negative stuff (or “haters” – ugh I’ve come to despise that word) and don’t get caught smoking crack or sleeping with Charlie Sheen.

What do you think? Are the magazines to blame for the Teen Moms’ fame? Should reality stars be given special treatment because it is their actual lives that serve as entertainment and they can’t “go home” afterward? And what about MTV’s role in all of this? Lots of great questions!