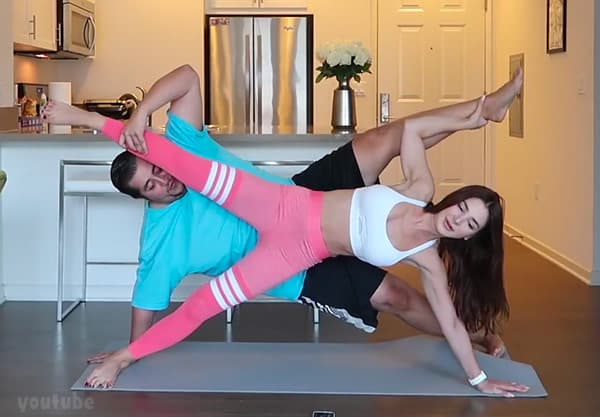 90 Day Fiance: Happily Ever After super couple Jorge and Anfisa are having some SERIOUS struggles this season as Jorge continues to demonstrate his imperviousness to therapy while his former high school girlfriend gets him in further hot water by claiming that he is the father of her ten-year-old daughter. But, it appears that #Jorfisa continues to overcome all their relationship obstacles on their continued journey to a happily ever after as they just uploaded a YouTube video doing the Couple’s Yoga Challenge together!

“Hi guys! Welcome back to my channel,” Anfisa states at the start of the 13-minute-plus clip while sporting skin-tight pink yoga pants and a revealing white top. “Today I am going to make a video with a very special guest –” she continues, before being gleefully interrupted by Jorge rushing in and sweeping her up in his arms.

“Hey, what’s up guys?” Jorge asks as Anfisa laughs. “I’m back!” He continues by revealing “I’m going to do a video with my wife — a little yoga challenge. I feel like I have no clue what I’m doing, and hopefully you guys could wish me some luck and I can keep up.”

Anfisa expresses her confidence despite their different body types. (At this point she pans down with the camera and we see Jorge giving her pert pink Anfisus maximus a pinch.

Anfisa shares some info on Vanity Planet’s “Work It : Digital Scale & Body Analyzer” (click the link and use “anfisa60” to get 60% off), and then she and Jorge begin their rather entertaining yoga challenge! Here’s the full video followed by a montage of most all of the completed poses:

[*Be sure to watch to the very end because Anfisa added a few funny extras.]

I am guessing we will be seeing a “Joga With Jorge” DVD available soon! 😉 Let us know in the comments what your favorite #Joga pose is!

So, back to the BIG question… Are Jorge and Anfisa still together? The answer appears to be a resounding “YES!” To be honest, I’ve never seen the two of them look happier and more comfortable together.

On a side note, I’m guessing this means that Jorge isn’t the daddy of his ex’s ten-year-old girl? Tune in to new episodes of 90 Day Fiance: Happily Ever After airing Sunday nights at 8/7c on TLC to find out!

UPDATE – A Twitter user made the point that we aren’t certain exactly when the video was shot, and I realized I never really mentioned that in the post. Although it is unclear when it was taken, I have been monitoring Anfisa’s YouTube skills, and it certainly seems to be recent. That being said, the question mark still remains. Props to @Ironsteph:

That may have been filmed a long time ago. Never trust social media these people make appearances together even after they’ve broken up for show purposes.