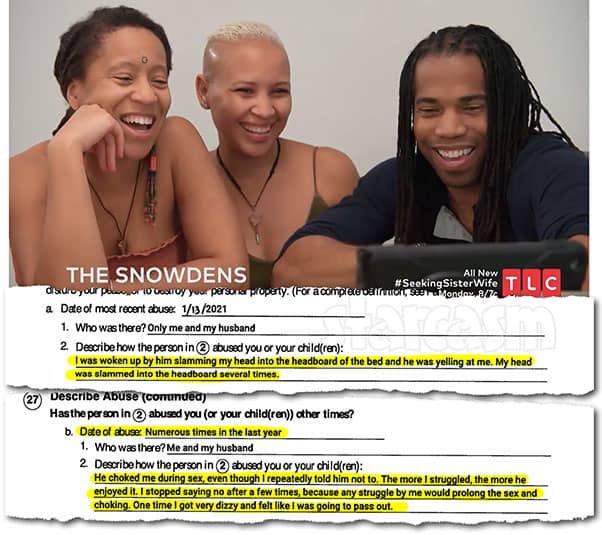 32-year-old Christeline filed the restraining order against Dimitri on March 12, and it includes her 5- and 10-year-old daughters. The filing confirms that she and her daughters made the move from South Africa to live with the Snowdens some time late last year. The incidents she cites in the filing are from January and before.

We obtained a copy of the Request For Domestic Violence Restraining Order, and here is how Christeline described the most recent instance of abuse from January 13:

She says Dimitri was the only other person present at the time and the attack resulted in “pain on back of [her] head.” Christeline states that she filed a police report on January 22.

The form later asks if there were previous instances of abuse, and Christeline alleges there were “numerous times in the last year.” She then describes how Dimitri would allegedly choke her against her will while the two were having sex:

He choked me during sex, even though I repeatedly told him not to. The more I struggled, the more he enjoyed it. I stopped saying no after a few times, because any struggle by me would prolong the sex and choking. One time I got very dizzy and felt like I was going to pass out.

Christeline says the choking caused “bruises and redness around my neck,” adding that “sometimes his nails caused scratches.”

When asked why she is requesting that her children also be included in the restraining order, Christeline says that Dimitri “is not the father of my two daughters and they are afraid of him as [he] often yells and punches the walls or furniture.”

Christeline also took out a restraining order against Ashley Snowden on the same day. In another incident from January, she alleges that Ashley “shoved me to prevent me from leaving the home my husband and I shared with her,” according to TMZ.

She also claimed Ashley threw a bottle at her and was verbally abusive. Christeline added, “My children are scared of her due to her yelling at them and the violence in the home between her and my husband and me and her.”

According to court records, both restraining orders against the Snowdens were renewed on April 6.

It’s also interesting to note that when asked to describe her relationship to Dimitri, Christeline checks the box for “We are now married or registered domestic partners.” She also checks the box indicating that she and Dimitri no longer live together.

TMZ is reporting that a judge has dissolved both restraining orders against the Snowdens after Christeline was unable to meet the burden of proof.

Dimitri countered [Christeline’s allegations] by showing text messages he claims Christeline sent him saying she liked the choking. In the end, the judge said she could not ascertain which party was telling the truth … so she tossed the case. As for Christeline’s separate allegations against Ashley — one of Dimitri’s other wives — the judge tossed that case, as well.

Are Ashley and Dimitri still together?

Fans of the show were suspicious of something going on between the Snowdens after Ashley removed Dimitri from her social media pages. She has been posting new age messages about topics like dealing with darkness and nature’s “mutations we see as weird, twisted anomalies.”

Here’s her most recent post (at the time of writing this article) in which Ashley talks about the full moon and segues into some astrological conclusions to be drawn from the “Moon in Scorpio and the Sun in Taurus:”

Meanwhile, Dimitri has been promoting the show on social media as well as delving into his psychological issues stemming from an abusive childhood.

On April 10, Dimitri posted a photo of himself when he was 5 years old and shared a lengthy self reflection:

Dimitri’s most recent post is an Earth Day declaration of his love for Ashley:

UPDATE – Seeking Sister Wife co-stars Tayler and Tosha have since responded to Christeline’s accusations. Click the link for the latest! (SPOILER: They didn’t really say very much.)

The break up with Christeline is at least the third failed “marriage” for Dimitri. He was married to a woman named Musawenkosi Ndlovu from 2003 to 2011. He started dating Ashley soon after, and the two remain together.

Dimitri (and Ashley) then married Vanessa Cobb and potentially Christeline Petersen while filming Seeking Sister Wife. Both of those relationships ended quite badly.

Just like busted relationships, restraining orders may not be all that unfamiliar to Dimitri either. Dimitri and his company, ION360, were sued for fraud in the amount of no less than $45,796.20 by an Indiana private college preparatory academy in 2011.

Here is a summary of the lawsuit from a Federal audit of the KIPP Indianapolis College Preparatory (School Corporation):

On February 22, 2011, KIPP Indianapolis, Inc., the school organizer for KIPP Indianapolis College Preparatory, filed a lawsuit against ION360, Inc., and Dmitri Snowden, ION 360’s president and sole owner (“Defendants”), for damages in the amount of no less than $45,796.20. On July 1, 2009, KIPP Indianapolis, Inc., signed a contract with “ION360, LLC” to perform various information technology services for the School for a flat monthly fee of $2,000. In the lawsuit, among other things, the School claims: (1) the Defendants did not perform the agreed-upon services; (2) the Defendants sold the School unlicensed or non-functional products; and (3) the Defendants sold equipment to the School that cannot be located on the School premises by the School. Defendants have denied any liability. As of the date of this report [March 16, 2012], the lawsuit remains pending and has not been resolved.

During the course of the case, the plaintiff filed a motion “for entry of agreed protective order,” which was entered and ordered the following day.

In January of 2012, Dmitri’s motion to continue was granted and the docket entry states “settlement pending.” A stipulation of dismissal was filed on April 18, and the case was dismissed with prejudice the following day.

In addition to the fraud suit and divorce, Dimitri had numerous other Indiana court entries. Between 2006 and 2007, Dimitri had multiple civil suits from landlords and financial institutions. Prior to that, he had numerous instances of driving without a license.

Will TLC fire the Snowdens from Seeking Sister Wife?

Getting back to Dimitri’s current legal issues, it is unclear how TLC will respond to news of Christeline’s allegations being made public. The network has quite an extensive history of reality stars getting into serious legal trouble. They seem to have little tolerance for child abuse or sexual misconduct involving minors, as evidenced by their canceling of Here Comes Honey Boo Boo, The Willis Family, and 19 Kids and Counting. (TLC couldn’t resist bringing the Duggars back, sans Josh Duggar.)

However, the network seems to be completely tolerant of domestic violence allegations and arrests. Producers of 90 Day Fiance: Before the 90 Days filmed Geoffrey Paschel just months after he was arrested for domestic violence. Despite the fact that the District Attorney later added kidnapping and vandalism to Geoffrey’s charges prior to the Season Premiere, the network decided to leave Geoffrey on the show.

Geoffrey’s arrest got covered by a few major news outlets, but aside from fan outrage, the backlash was rather subdued. For example, TMZ would normally eat a story like Geoffrey’s up, but they never wrote a single article about it. Meanwhile, they churned out article after article on Geoffrey’s co-star Big Ed Brown.

As a result of the media being relatively quiet, TLC amazingly NEVER SAID A WORD publicly about Geoffrey. They excluded his scenes from the Pillow Talk after show, and they didn’t invite Geoffrey to the Couples’ Tell All, but they never issued a single statement about it.

TLC also welcomed 90 Day Fiance star Larissa dos Santos Lima after THREE domestic violence arrests. And there’s Breaking Amish and Return To Amish bad boy Jeremiah Raber, who was arrested for domestic violence in between seasons. I’m sure there are numerous others that I either cannot recall or am unaware of.

Given those precedents, and the fact that neither Dimitri nor Ashley were actually arrested or charged with anything (yet), I am assuming that the Snowdens will remain on Seeking Sister Wife and TLC will continue to air Season 3. We won’t know for sure until TLC issues a statement, or we see the Snowdens on the new episode this coming Monday night. Stay tuned!

Want to offer up your thoughts on Christeline’s allegations and TLC’s lack of response so far? Join the conversation over on Instagram:

SEEKING SISTER WIFE Dimitri Snowden may be homeless; where is Ashley?