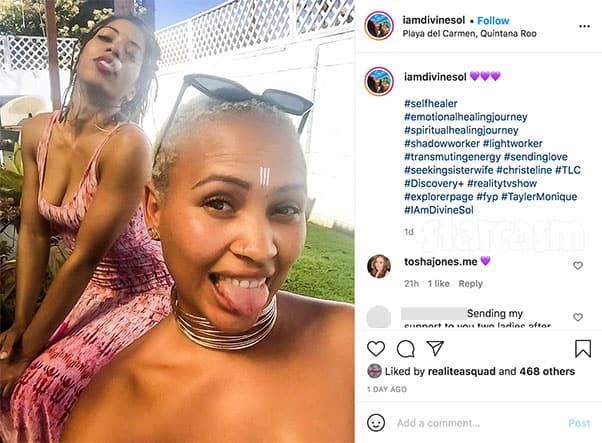 Fans of Seeking Sister Wife are still in shock after news broke yesterday that show star Christeline Petersen had filed restraining orders against Ashley and Dimitri Snowden amidst allegations of domestic abuse. The Snowdens’ other potential new sister wife this season, Tayler Monique, has since responded to the news, and she was joined by their co-star Tosha Jones.

Tayler’s response came in the form of an Instagram photo of herself with Christeline. Above is a screen cap of Tayler’s post in which you can see Tosha responded with a purple heart emoji.

“This is an old photo of Chrissy and I,” Tayler explained in the comments. “Just sending her my love is all.”

For some reason, Tayler’s post had one commenter VERY irate. Tayler responded by explaining the post a bit. Here is the interaction:

COMMENT: Omg I usually don’t like to be negative energy out but you are a complete f*** b*** and have low self esteem if this pic wasn’t taking today which it could have not been because that looks like the snowden’s backyard. The sh*t she but out to he world sounds completely horrible and u post this f***ing picture. Like the story was just posted 9 hours ago. Omg I hate b*tches that try to come up off another women’s pain

TAYLER: I learned some terrible news today about someone that I love. Not sure what information you have that’s helping you form this opinion, and it’s a strong one.

I have yet to see a response to the Snowden abuse allegations from Sidian Jones or the Winder Family. We also haven’t gotten a statement from TLC.

As of the time of this post, there is still a new episode of Seeking Sister Wife scheduled for Monday night. In the episode, Christeline “returns to LA just before the shutdown and meets Tayler for the first time.”

UPDATE – TMZ is reporting that a judge has dissolved both restraining orders against the Snowdens after Christeline was unable to meet the burden of proof.

Dimitri countered [Christeline’s allegations] by showing text messages he claims Christeline sent him saying she liked the choking. In the end, the judge said she could not ascertain which party was telling the truth … so she tossed the case. As for Christeline’s separate allegations against Ashley — one of Dimitri’s other wives — the judge tossed that case, as well.